Opinion: budgets may be about the future, but our fiscal history tells us much about our past and the business of government over many centuries.

Budgets are mainly about the future: the minister announces taxing and spending plans for the year ahead, and beyond. But as Paschal Donohoe rises to deliver his speech in Dáil Éireann tomorrow, he may well reflect that the weight of the past, and not just expectations of the future, lies heavily on his shoulders.

After all, he will come to the Dáil from a department acutely conscious of its central role, however contentious, in every major event in independent Ireland’s story. It is the department of Michael Collins, T.K. Whitaker and Brian Lenihan - and yes, the department of less impressive figures down the decades. Whatever their talents and their failings, ministers for finance have almost invariably been consequential players in political life, and any new minister stands somewhat in their shadows.

From RTÉ Prime Time, Robert Shortt and David McCullagh tell you what you need to know to understand Budget 2020

Most recently, the Department of Finance is bruised by history. The difficult decade since 2007 opened with deep systemic failure as the Great Recession upended our happy tiger. This was followed by grinding crisis management, under the watch of cold paymasters in Europe and the IMF. Then, slowly, an uneven recovery, yet to be fully believed, which is still uncertainly threatened.

At the same time, the Department of Finance is now somewhat restored to its pomp. Having previously lost its public expenditure functions to a separate department (for the second time in its history), it was recently lovingly linked back to that department under one minister. It's like a post-separation, but pre-marriage, civil partnership with fewer flags, and more memos.

From RTÉ Radio One's Morning Ireland, Mícheál Lehane and David McCullagh look back over the career of T.K. Whitaker

All organisations tell their own story to themselves, their history. But does the intricate history of public finance matter very much? Are these just the memories of antique civil servants, fated to be slowly dislodged by shiny new recruits, who have all the impressive energy and brainpower of youth (and perhaps a dash of worrying over-confidence)? Does fiscal history matter for anyone else?

I think it does, for a number of reasons.

Knowing fiscal history alerts us to the fact that as a political community, we are rooted in a past. Not just a past of war and turmoil, of economic progress and setbacks, and of social movements, but also a past of imperfect, halting, attempts at the ordinary business of government—over many centuries.

From RTÉ Archives, the 1991 Budget from Albert Reynolds was the first to be televised

Start with the language and the ritual of the budget. The budget speech itself is formally a "financial statement" and its form has been in place since independence. Even at that time it emulated long established practice. In some key legal respects, the budget today is identifiably part of a fiscal system set out by the Victorian master of public finance, William Gladstone, as UK chancellor of the exchequer in the 1860s.These origins, although modernised and adapted for a different world, nevertheless remind us that our independence was not an institutional rupture; it was not in important respects simply an abrupt exit from a union: a ‘cliff-edge’, so to speak, but rather, a gradual uncoupling, marked by continuity as well as change.

We did borrow the British model of public finance, with a powerful central treasury department. Our budgetary process continued to use the Gladstonian public finance language of "votes" and "estimates" and "supply" and "money bills" and "appropriation accounts" and the like, long after the UK had adopted more managerial jargon.

From RTÉ Archives, a RTÉ News report on how An Taoiseach Jack Lynch, delivered the 1970 Budget in the absence of the Minister for Finance, Charles J. Haughey

This inheritance is sometimes derided, or regretted, as "colonials copying the masters". A more sympathetic reading acknowledges that in the aftermath of a rebellion, a war against an empire, a world war, and a civil war, some of the builders of independent Ireland’s system of government understandably sought fixed points of stability in how we did public business in a chaotic world. I would argue that impulses for continuity and stability, right or wrong, are deeply embedded in our fiscal state. I think these were underestimated in the depths of our recent crises by those who predicted (or hoped for) default on public debt and/or exit from the euro—and similarly for those who now dream of exit from the EU.

At independence, a robust and elaborate public finance system, tested and reformed in the UK after the First World War, was close at hand and was taken up. In thinking about this, we are also reminded that independence is not just constructed by popular action and great political figures. You need the lawyers, the accountants and the public finance specialists to turn national aspiration into the machinery of effective government. The current cohort of newer finance and public expenditure civil servants might well take some time to read about the architect of the department they serve. This was Joseph Brennan, the Department of Finance's first secretary (before they became 'general’): probably the most under-appreciated figure of our independence story.

From RTÉ Archives, coverages of protests on Kildare Street as Minister for Finance Brian Lenihan delivered the 2011 Budget

Think of what Brennan and a very small (and very young) team faced, and accomplished. The exchequer account of 1922/23 lays out in cold but recognisable terms, for those constructing the same document today, some of the challenges of transition and separation for the new state. For example, in that first accounting year, we did not in fact have full control of our fiscal borders. By agreement, there was a transitional period, and we only left the ‘customs union’ with the UK in the following year. Sound familiar?

This meant a series of large budget payments back and forth across the Irish Sea for many years, as we disentangled from a fiscal system that had been in place under the union with Britain for over a century. That process was not truly complete for a decade and a half after independence, documented drily in footnotes to accounts, but impactful on public policy all the same.

From RTÉ Archives, a RTÉ News report from Cork on public reaction to such measures in the 1980 Budget as a 300% increase in duty on soft drinks and 5% on golf balls

Before that, in the run-up to the treaty negotiations, Brennan, while still a Dublin Castle civil servant, had briefed Collins in extraordinary historical detail on financial aspects of British-Irish relations. The quality of the documents Brennan had prepared meant that Ireland got a pretty good fiscal deal at separation. In essence, the new state did not have to shoulder its share of the joint UK public debt. Scotland should be so lucky.

Brennan and his team knew full well that they were not the first to pass this way. They  knew the history of the separate Irish exchequer, before the union with Britain. Fiscal independence had ended not in 1801, but 1817, as recorded in Ireland’s finance accounts of that year.

Exactly two hundred years ago, a fiscal drama for Ireland, and not for the last time. No bond holders were harmed in the making of that crisis

The Act of Union had required heavy payments from Ireland to the UK, in effect to help pay for lengthy and expensive wars with France. Taxes rose, borrowing exploded, and in time, no more could be borrowed: the Irish exchequer went bust in 1817. No bond holders were harmed in the making of that crisis, but the consequence was full integration of the Irish national debt into that of the UK. Exactly two hundred years ago, a fiscal drama for Ireland, and not for the last time.

Before even that, the 18th century saw Ireland’s ascendancy express its identity through the exercise of fiscal power in the Dublin parliament’s varied attempts to control the public purse. A key weapon in those controversies was the regular compilation of detailed accounts of revenue and expenditure, and of accounts of the national debt of Ireland, printed in formal and bewildering detail in the journals of Irish house of commons, at great expense. The 18th century revenue and expenditure data are online to be sliced and diced, and graphed, and puzzled over: they are part of our contested heritage.

Today, journalists, graphic artists, public officials, and some economists, strive to present complicated budgetary data in attractive ways for a wide audience. This is not new. This wonderful graphic of national debt is from a 1791 treatise on the history of Ireland’s public finances and is a striking early example of innovation in data visualisation. 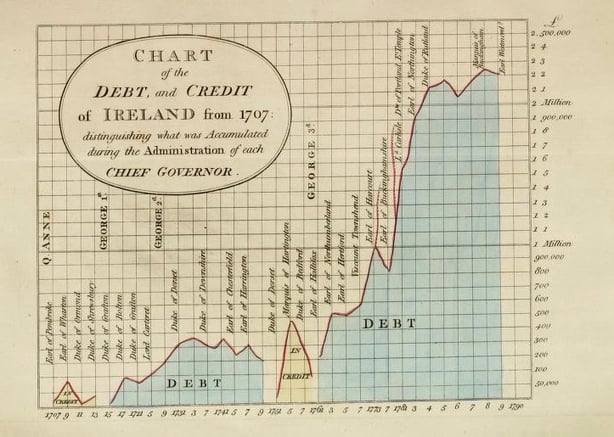 The public finances then, at least for wealthy, politically powerful and active citizens, were not mere technicalities. They sometimes prompted riot and tumult, as fear of debt or taxes or wasteful expenditure took hold of the public mind, including politicians eager to make a name for themselves. Ireland has a uniquely precocious historical record of awkward parliamentary public accounts committees, from the early 18th century. Our current PAC members might well wish to copy and paste this prelude to an Irish PAC report of 1707, which rehearses familiar complaints:

Of course, it is tempting to overdo analogies, or to imply in a naive way that the past was ‘just like now’ in fiscal matters, or otherwise. In going back, we are in different world, one that needs careful exploration, informed by historians’ expertise and sensitivity. But it is irresistible to at least note that Irish public finance did not begin a mere three hundred years ago. It was old by then. To make the case, this extraordinary image of the medieval Irish exchequer: 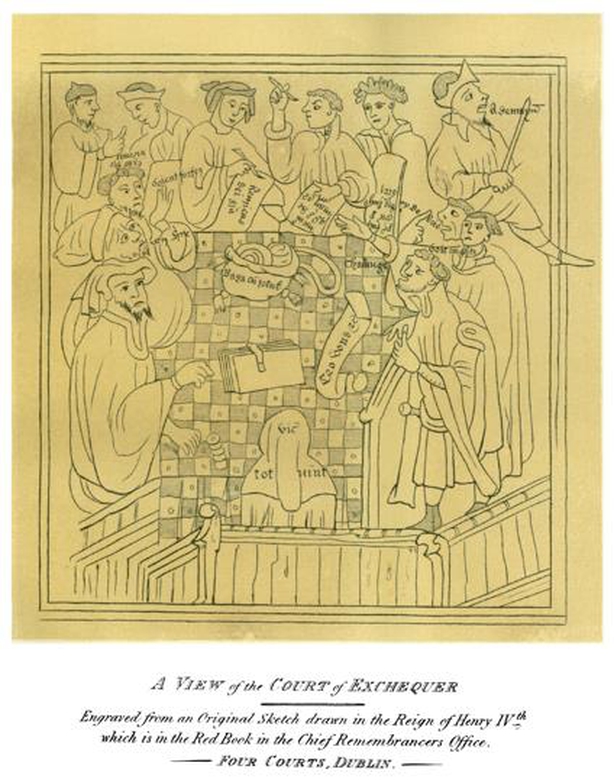 This is a 19th century copy of an original in the Red Book of the Exchequer, which went up in flames with so much else in the fire which destroyed Ireland’s public records office in the civil war. The image shows the officials of the exchequer holding to account the sheriff of a county, who has his back to us (at the bottom of the image), and who is wearing a hoodie. He pays in the taxes he has collected which are due to this ancient body. The officials carefully track debts owed and payments made, using counters placed on a table covered with a chequered cloth, from which the name derives. Current public sector accounting practices are somewhat more sophisticated, and senior department of finance officials are no longer barons of the exchequer, one hopes.

We have been here before. Good luck, minister.

Dr Aidan Kane is a lecturer in economics within the JE Cairnes School of Business & Economics at NUI Galway. He leads the Duanaire research project at NUIG which is a treasury of digital data for Irish economic history.