Dan McFarland admits his Ulster side will have a hard time overcoming Saturday's defeat to Leinster.

The province threw away a 19-point lead in the final 45 minutes at the RDS to eventually lose by 11, while they also played the majority of that time with a man advantage, after a red card in the first half for Cian Healy.

When Ethan McIlroy scampered down the right wing to finish Ulster's third try on 35 minutes, they looked on course for a statement win against Leo Cullen's side, that score pushing them 22-3 in front.

However, the momentum flipped in the final five minutes of the first half, Ulster conceding a cheap penalty for a high tackle, which Leinster eventually turned into a Rónan Kelleher try, before bullying their opponents 28-7 in the second half.

As you would expect, McFarland cut a frustrated figure after the match, and he admitted they played their part in allowing Leinster complete the comeback.

"We were definitely on the backfoot in that third quarter," he said.

"Momentum is a funny thing in rugby, especially when you are playing in a place that is as difficult to win as it is here.

"That's hard to take. Definitely, that's going to knock us. We’ll have to get our heads down and review and refocus. Nothing like a European game away from home to refocus the mind."

And although the Ulster boss laid much of the blame at his side's door, he was quick to praise Leinster for how well they rallied after going a man down so early in the game.

"It [the red card] obviously affects Leinster. They took off a winger and left their eight forwards on which was probably the smart thing to do, probably what I would have done in their situation.

"It's funny how difficult it is to play against 14 men. Teams, especially Irish teams, tend to grow an extra arm and an extra leg when they have 14, not just against us but for us as well. I've seen a few times over the years, fair play to them dealt with that well.

"We helped them a little with a double yellow."

The second-half collapse brought Ulster back to one of their old issues of last season when they gave up a number of late leads in big games, such as their away meeting with Munster in January, the URC semi-final in Cape Town, and their Champions Cup last-16 second leg against Toulouse.

That Toulouse defeat in April hit Ulster hard, and they still looked rattled by it when they put in a flat performance against Munster two weeks later.

A similar hangover could be a season-killer this time around, with Sale and La Rochelle coming up in Europe in the next two weekends, before the Christmas Interpros against Connacht and Munster.

"We'll go about our business. I don’t think there is any doubt we are going over to play the second-best team in England, an extremely physical team," McFarland said of Sale.

"They’ve had a rest this week. We obviously had a brutal battle here. That makes it extra tough.

"It's something we will really look forward to, the challenge. It’s another week and we’ll go through the same process we normally go through."

The Ulster boss is likely to be without John Cooney for this Sunday's Champions Cup opener against Sale, after the scrum-half suffered a worrying head injury early in the second half at the RDS.

There were an alarming number of head injuries on the Ulster side, with Iain Henderson, Tom Stewart and James Hume also leaving the game for similar issues.

Henderson was withdrawn having looked unsteady on his feet after an accidental clash with Gibson-Park, Stewart needed treatment on a blood injury following the incident which saw Healy red-carded, and Hume didn't return to the game after his sin-bin, having clashed heads with Garry Ringrose. 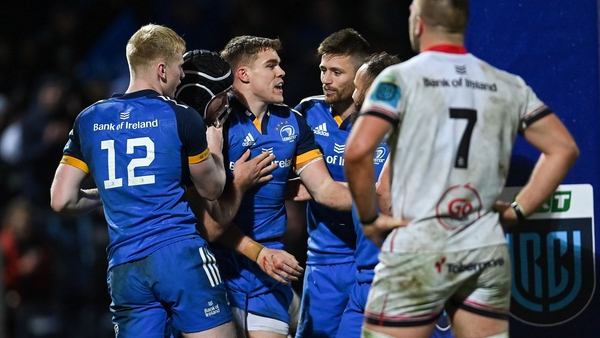