For those who believe that red cards ruin games, this should be required viewing.

A top of the table Interpro, with both sides loaded with internationals, this lived up to the billing.

For the first hour, it felt like it would be a statement Ulster win. In the end, Leinster did the talking.

Leo Cullen's side looked doomed shortly before half time. They’d been reduced to 14 men after just 20 minutes when Cian Healy’s high tackle saw him clash heads with Ulster hooker Tom Stewart, and were hit for three tries in the next 15 minutes as Ulster stormed into a 22-3 lead.

Had it not been for Rónan Kelleher’s try right on half time, the comeback may not have materialised, but after cutting the gap to 12, Leinster still looked alive.

Garry Ringrose played a captain’s role, the centre scoring two tries in the space of three minutes to flip the game on its head just after the hour mark, while Ulster’s collapse saw their numerical advantage also wiped out with quick-fire yellow cards for James Hume and Nick Timoney seeing them reduced to 13 players.

As final quarter wore on, the league leaders found the best form of their season, with Andrew Porter and James Lowe landing two more blows to not only secure a bonus point, but also give the win a glossy finish, and send them nine points clear at the top of the BKT United Rugby Championship table. 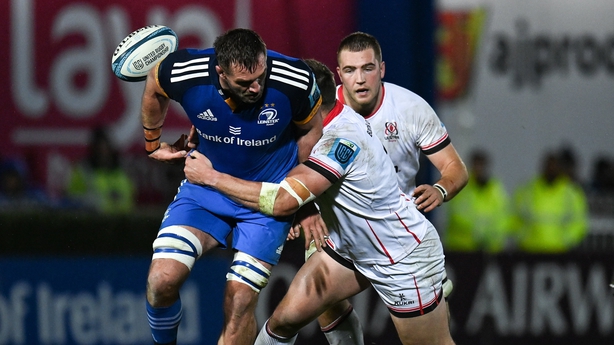 Byrne and Cooney traded penalty kicks inside 10 minutes, the Leinster out-half slotting a long-range effort after Stuart McCloskey was penalised for not rolling away, before an infringement at the scrum allowed Cooney to make it 3-3.

The previous two meetings of these sides were dominated by the weather, and it looked like we were in for something similar as the rain poured down in Ballsbridge for much of Saturday evening.

Thankfully, the skies cleared just in time for kickoff, but the lasting effects of the downpour seemed to linger in the opening quarter of the game, Gibson-Park knocking-on twice for Leinster with Ringrose also spilling a simple ball, while on the Ulster side Billy Burns lost control with an attempted offload.

The first quarter had been a quiet affair, dominated by kicking and a chess battle for territory, but right on 20 minutes it turned in Ulster's favour, when Healy was red-carded. 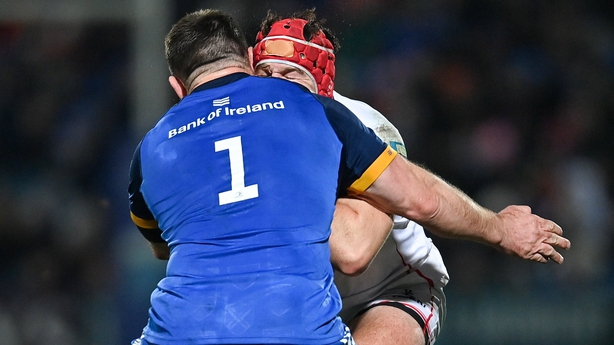 The Leinster prop clashed heads with Stewart in the tackle after the Ulster hooker broke from the back of the lineout, a collision which left Stewart needing treatment for a blood injury. Healy had been upright in the tackle, and after checking with his TMO Rowan Kitt, referee Christophe Ridley had little option but to produce a red card.

Ulster made the advantage count instantly, kicking for the corner, and after Stewart’s replacement Herring found Treadwell at the lineout, the hooker reclaimed possession at the back of the maul before touching down to score, Cooney’s conversion making it 10-3.

The seven-point lead turned into a 14-point advantage by the 28th minute, this time Ulster gaining entry to the 22 after a high tackle by Ross Byrne.

Leinster dealt with the Ulster maul, but after the visitors worked multiple phases close to the line it was Treadwell who barged his way over for the game’s second try, Cooney’s third kick of the night making it 17-3, and putting Ulster firmly in control.

It’s rare Leinster look rattled, but they weren’t able to live with the physicality Ulster were bringing in the contact area, and when McCloskey stripped Jason Jenkins of the ball in the tackle on 35 minutes, they quickly moved it through the backline, Stewart Moore playing the final pass to McIlroy who sprinted clear for a third try, to the stunned silence of the RDS. 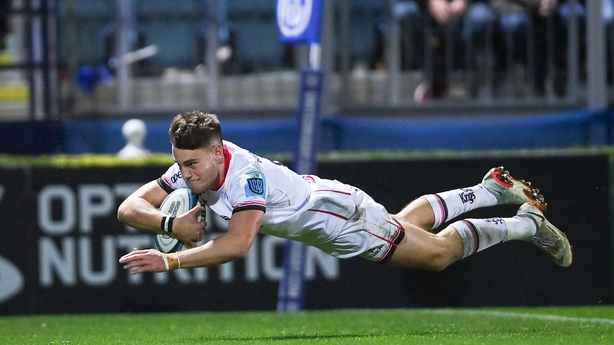 Cooney pulled the conversion left and wide, and it seemed to offer an opening to the crowd to find their voice. Leinster also responded, playing the final minutes of the half like they were the closing moments of the game.

A high-tackle from McCloskey gave them a shot to the corner, and they used it to hit back with a try right on half time, Kelleher touching down off the back of a maul, Byrne’s conversion cutting it back to 22-10, and giving the hosts some hope.

The introduction of both Tadhg Furlong and Dan Sheehan within four minutes of the restart was proof enough that there was life in this game, while Ulster lost Cooney to a worrying head injury after he attempted to tackle James Lowe.

Even in the first 10 minutes of the second half, the game had become tense; Ulster tightened up as they looked to protect their lead, and although Leinster opened up, they couldn’t find the accuracy, summed up by Gibson-Park's wayward attempt at a chip over the defence.

Their persistence was rewarded just short of the hour mark when Garry Ringrose spun out of Hume’s tackle attempt to race in and score after a sustained series of phases right on the Ulster line. 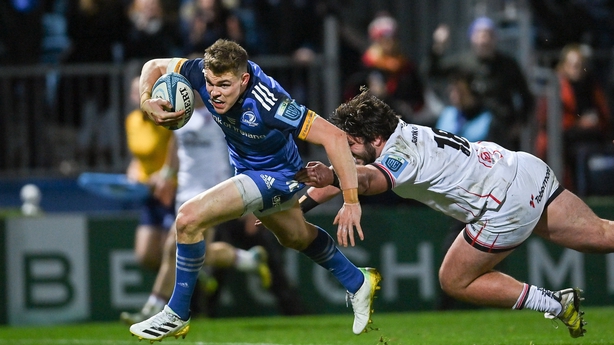 The conversion from Byrne reduced Ulster’s lead to 22-17, while their numerical advantage was gone for the next 10 minutes, Hume sin-binned after he made contact with Ringrose’s head in his failed tackle attempt.

And just moments later on 62 minutes Ringrose brought the house down, dancing around Stewart Moore to score his second try after big carries from Van der Flier and Jenkins.

As Byrne converted to send Leinster 24-22 ahead with just over 15 minutes left, Ulster were self-destructing, going down to 13 men with a yellow card for Nick Timoney for an infringement in the build-up to the score.

Even with a small lead, Leinster went for the jugular, and when Porter forced his way over the line on 72 minutes it secured the most unlikely bonus point of the season.

They weren't finished yet, Lowe marked his return from action by jogging in to finish an overlap for their fifth try, five minutes from time, Byrne continuing his perfect form off the tee to make it 38-22.

There was still time for the visitors to take something from the game however, Sam Carter's try in the final minutes giving them a try-scoring bonus point, although Dan McFarland will be sick they didn't go home with more. 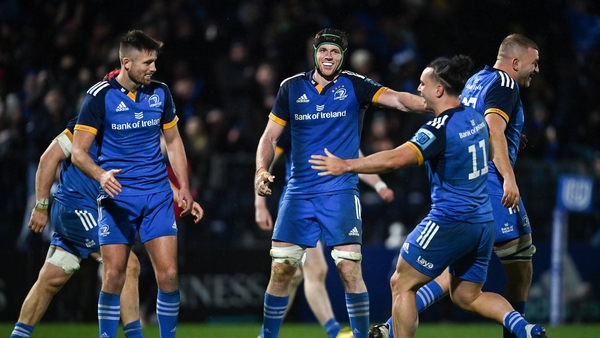