If Glasgow Warriors head coach Franco Smith needs any motivation for his side ahead of this afternoon's meeting with Leinster, he doesn't have to go far back in the fixtures list to find it.

It's just under six months since the Warriors last came to Dublin, but the Scots were humiliated at the RDS that afternoon, conceding 12 tries and 76 points to a Leinster side who would have had been better served with a training session.

It was the final game in charge for head coach Danny Wilson. He was sacked shortly after, the brutal defeat in Dublin the final straw in a season which saw them miss out on Champions Cup qualification.

South Africa's Franco Smith came in over the summer, and after three games it's hard to get a read on the 2015 champions.

Six games in, and they have three wins and three defeats. All three wins have come at home, all three defeats have been away. Not exactly form that would make Leinster fans sweat, but at the very least a backlash for that embarrassing display in June is the least anyone can expect.

"At their best, Glasgow are a niggly team, into everything. They make life uncomfortable for you," said Leinster head coach Leo Cullen.

"You've seen it in plenty of games Glasgow have been involved in over the years, there's skirmishes going on, plenty of things in the game, so we need to make sure we're ready for that type of physical game."

Conditions could dictate the kind of game we get at the RDS, with rain expected in Dublin 4. 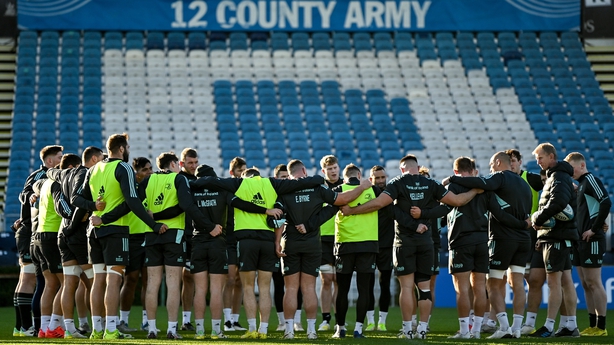 It could effect the Warriors' possession game; only Zebre have kicked less than Smith's side so far this season, while Leinster are among the league's highest totals in that department.

The ruck is also likely to be an area of interest, with Glasgow forcing more turnovers than anybody else in the league, while the Cell C Sharks showed a good ability to slow Leinster down at the breakdown earlier this season.

"They use the word 'brutality' a lot, so for us it's making sure we're in the right frame of mind for the game, because we want to be able to try and impose our own game, in attack and defence.

"We need to be nice and clear with what we want to achieve, so players have worked well, the attitude have been good. We have to be prepared for the conditions and trying to impose our game.

"There are showers tomorrow [Saturday] so how that is in reality, we’ll have to see. Conditions have been a bit of a challenge at the moment.

"But it will be similar for Glasgow. I thought they were impressive in their last game against Benetton at home. They had their challenges with their trip to South Africa and their second game got cancelled and I know they had some sickness that week they played the Sharks.

"But Franco is a smart coach and understands the teams in our league which gives him a strong advantage coming in. So it will be a good test for our guys, but that is what we want going into the following week and Europe after that."

While Leinster are resting their frontline internationals, their starting XV contains an experienced core through the pack and half-backs, with Ross Byrne wearing the No 10 jersey.

The out-half ended his 20-month international exile last week in dramatic circumstances, brought onto the replacements bench shortly before kick-off against Australia after an injury to Johnny Sexton, and he held his nerve to land the match-winning penalty four minutes from time.

And Cullen said the 27-year-old proved he has what it takes to add to his 14 caps in the future.

"He’s a great temperament Ross, he’s been craving for that opportunity. Hopefully he can kick on again. He’s been fantastic for us Ross.

"You think back to our last game, Round 7 against Scarlets and you have a fair bit of moving parts, a lot of guys were in camp and unavailable and I thought he led the team really well that day, Rhys Ruddock another one and Ross Molony. So there are leaders in the group.

"We’ve a similar group here tomorrow, and hopefully they can produce a big performance, we want everyone to do well. He’s very important for us, Ross.

"It’s just doing it in a high-pressure moment, it’s your classic clutch scenario at the end of a game. And he nails his kick, a bloody tough kick, with the referee giving him a bit of input as well, trying to distract him.

"He’s shown that composure and temperament in big games for us as well and it’s good to have for us."