Jordan Larmour has made a strong start to the season but he knows that's only half the battle in his bid to earn an Ireland recall for the November Tests.

The Leinster wing, who won the last of his 30 Ireland caps against Japan in July 2021, impressed in the tour matches against the Maori All Blacks last summer and has continued that form with Leinster in the BKT United Rugby Championship.

Larmour boasts a highlights reel of brilliant tries but his work in defence caught the eye in the wins against Benetton and Ulster. The 25-year-old was the top tackler in the Leinster backline in both matches and popped up with a big turnover in the victory in Belfast.

"It would be great to be involved [in the autumn Tests]," said Larmour. "I’m just kind of focusing on taking it game by game and doing anything I can put my hand up, doing the basics really well and then hopefully big moments from off the back of that.

"I'm happy the way the season started but I know I need to keep on improving and keep kicking on. It's a challenge I'm looking forward to."

Leinster have been on an upward trajectory since the nervy opening-day win over Zebre Parma and Larmour knows that must continue when they face the Cell C Sharks on Saturday, live on RTÉ2 and RTÉ Player.

The South African teams have made a strong start to the season, with all four inside the top seven in the URC table, with the Sharks having opened their campaign with away wins against Zebre and the Dragons.

"The South African teams are big and physical, they back themselves in defence and bring a lot of line speed. It's tough to play against," said Larmour.

"Your attack has really got to be on it when you've lads flying off the line trying to whack you. They've definitely made everyone up their game with the way they're playing at the moment.

"They’ve got some serious kickers on the teams, they like to try and find those those corners and put you on the back foot. It's going to be a tough league all year."

Leinster survived a second-half fightback from Ulster last weekend, the hosts rallying from 20-3 down to make it a seven-point game late on.

Larmour said they cannot afford another off-colour final quarter against the Sharks and must improve when it comes to closing out games.

"It is an area that we're aware of and where we need to get better, especially in the bigger games. Those are the big moments that you need to be winning.

"It's something we have talked about but we will be looking to improve it. It probably comes down to the basics, getting our set-piece right, playing in the right parts of the field and keeping whoever we’re playing at arm's length." 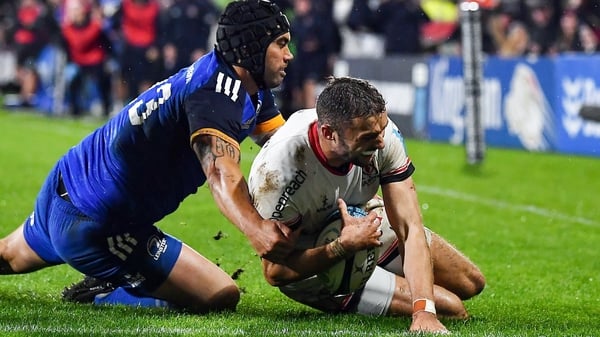