Leo Cullen said Leinster must show a more ruthless streak when closing out games after they survived a second-half fightback from Ulster on Friday night.

Leinster led 20-3 after 46 minutes at a sodden Kingspan Stadium thanks to tries from Ryan Baird and Dan Sheehan and 10 points from the boot of Ross Byrne.

However, they didn't trouble the scoreboard again as Ulster fought back to make it a one-score game.

But for a superb last-ditch tackle by Charlie Ngatai on Aaron Sexton, which caused the Ulster wing to lose possession as he dived over the tryline, it would have been an even closer finish as Leinster held on to extend their 100% start in the BKT United Rugby Championship.

Leo Cullen reflects on a hard-fought win over Ulster pic.twitter.com/8aOdR8WdX0

"The game could have been put to bed 10 minutes into the second half," said Leinster head coach Cullen.

"There was lots of excellent stuff in the first half, set-piece, how we managed the game. We were really smart in terms of the way we attacked the game.

"Start of the second half, we’re 20-3 up and have a lineout five metres out - crooked throw, scrum, give away a penalty, Ulster relieve the pressure. They got the roll on a couple of times with their maul, we know it’s a strong part of their game.

"How we deal with high balls, we just gave Ulster access points back into the game. Then the crowd are into it, a bit more pressure on the referee, more decisions are going their way, then you’re under the pump.

"But to be fair to the lads they scrambled well. It was an unbelievable try-saving tackle by Charlie Ngatai in the corner, which just knocks a bit of the momentum."

Cullen handed three of his Ireland internationals their first appearances of the season. Jack Conan started at No 8 and played his part in a strong Leinster set-piece while Johnny Sexton and James Ryan were sprung from the bench in the second half.

"There are lots of parts of our performance that could be a hell of a lot better but there was a lot of guys coming in for their first game of the season, and they were struggling. It’s not even the pace of the game, just the type of game it is, a very wet night, very difficult to catch some of the many high balls that were raining in on the back threes."

Ulster head coach Dan McFarland concedes Leinster were that bit better than his side on the night pic.twitter.com/Rgv7Fk6oJW

Cullen’s counterpart Dan McFarland was left to rue an error-strewn first-half performance which left them with a mountain to climb.

A scrum penalty gifted Leinster their first visit to the Ulster 22, from which Baird scored, while the decision to take a quick lineout deep inside their own half backfired, with Leinster winning a turnover penalty from which Dan Sheehan crossed off a trademark driving maul.

"That was a big mistake, a big error that might come off against some sides but on the balance of probability, not against Leinster," said McFarland when discussing the quick lineout.

"There might have been an opportunity to clear our lines if we played it quickly but it clearly wasn’t that. It ended up in a costly try for them.

"There were a couple of occasions in the first half where I feel we could have controlled the pitch a little better in our decision-making.

"There were also a couple of times where we chased really hard and put some real pressure on them. They didn’t make many mistakes in the first half and we did." 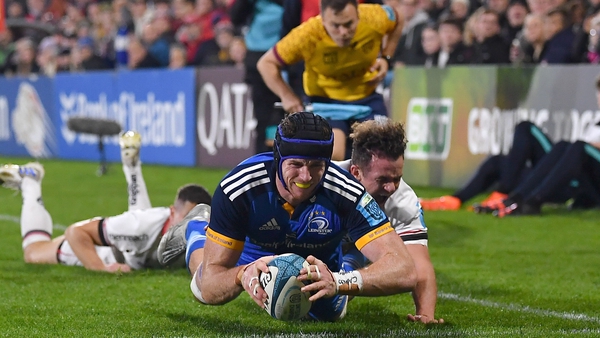