Munster head coach Graham Rowntree admits he has mixed emotions after they picked up their first win of the BKT United Rugby Championship season.

After back-to-back defeats in recent weeks, the province finally got off the mark with their new coaching ticket, in a 21-5 win against Zebre Parma at Musgrave Park.

However, for the second week in a row Munster were held scoreless after half time, failing to secure a bonus-point in an error-strewn second 40 minutes.

"Delighted with the win, after the week we've had," said Rowntree, as he reflected on his first win since becoming head coach.

However, the province's former forwards coach admitted his side's inability to get the decisive fourth score in the second half was a big frustration.

"Delighted with the win but I'd love to have come away with a bonus point.

"We'll look at what we can do better in the second half in terms of ball retention.

"Our ambition is good, but we've got to look after the ball.

"It's important for momentum. It's been a tough, short week, but a tough week on many fronts. We needed the win, and needed to show elements of the game we've been working on exceptionally hard.

"I was just disappointed with the consistency of our ball retention."

"We have a really good league but we damage it with that type of a product"@docallaghan4 airs his frustrations about the on-field delays exemplified during Munster's win over Zebre #rterugby #MUNvZEB pic.twitter.com/1ERU2Nbp2e

With multiple TMO checks, injury stoppages, and the new official water breaks in each half, the game itself never really flowed, and the Munster boss said it contributed to a fractured contest.

And Rowntree says they will need to be far more composed when they travel to Galway next Friday, to take on Connacht in their first Interpro of the season.

"It was frustrating, but you've got to crack on. We showed some good game control, our set-piece was in good nick, our maul in particular, and the second half became fractured, stop-start, injuries, and was littered with our own errors, our own controllable errors. 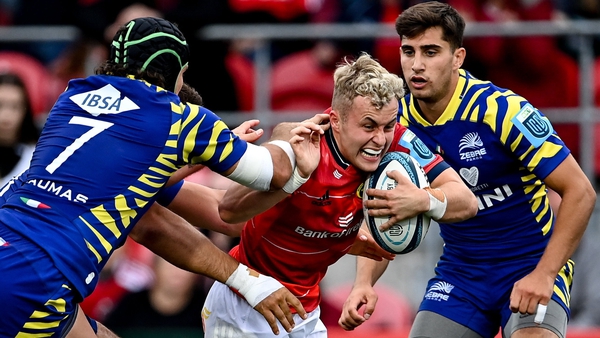