The third week of the new season brings with it arguably the biggest game of the campaign to date.

After starting out with bonus-point wins, Ulster and Leinster are the early pace-setters in the URC, but at least one side's perfect record will end this week.

While Leinster finished top of the Irish Shield last season, as well as the regular season standings, Ulster had their number, winning their meetings at both the RDS and Kingspan Stadium.

With two games under their belt and most of their frontline internationals back on the pitch for both sides, the early season cobwebs have also been blown off, making for a fascinating contest in Belfast.

While Leinster and Ulster will be looking to maintain their hot starts, both Munster and Connacht will be hoping their campaigns can start warming up.

Defeats to Ulster and Stormers have sent Connacht to the bottom of the table through two weeks, and with Bundee Aki and Jack Carty both absent, they look up against it this evening against the Bulls at Loftus Versfeld, with the hosts close to full-strength.

Munster welcome one of the league's early surprise packages - Zebre Parma - to Musgrave Park for their first home game of the season, looking to kickstart their campaign after defeats to both Cardiff and Dragons, and give new head coach Graham Rowntree his first win in the job.

RTÉ Radio 1 Extra will have live commentary from Ulster v Leinster on Friday night at Kingspan Stadium, while you can hear updates from Munster v Zebre Parma on Saturday Sport on RTÉ Radio 1..

Connacht will be in for a hot day in Pretoria on Friday, but temperatures are expected to drop down to around 22C by the time their meeting with the Bulls kicks off at Loftus Versfeld. It will be much cooler up in Belfast for Ulster v Leinster, with temperatures of around 13C for the 7.35 kickoff, but while there will be showers of rain, they're expected to have cleared by the evening. It's likely to be slightly warmer in Cork for Munster v Zebre on Saturday, although there could be some rain as the game wears on. 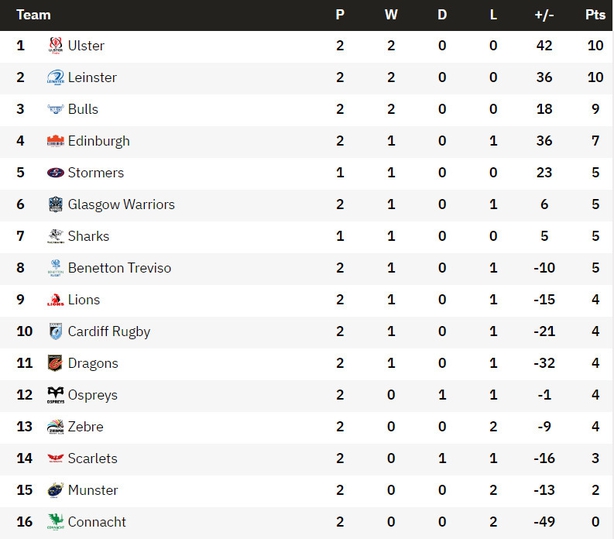 It's already looking like a long season ahead for Connacht.

They've been handsomely beaten in their first two games, while Bundee Aki's red card and suspension means he won't be lining out in Connacht colours until the end of November at the very earliest.

Andy Friend's side looked competitive against the Stormers until that second half sending off, but it all unravelled when they went down to 14 men.

Not only are this week's opponents, the Bulls, close to full strength with Elrigh Louw and Canan Moodie back from Springbok duty, but they also now have to deal with the altitude of Pretoria after last week's game at sea level in Stellenbosch.

Connacht produced one of the most complete performances of their season to defeat the Bulls last October, but Jake White's side improved immeasurably as the season went on, going on to reach the final where they lost to the Stormers.

They're also on an eight-game winning streak at Loftus Versfeld, dating back to last February.

If there's any consolation for Connacht, it's that they won at altitude against the Lions last April, which was also the last time they picked up a win away from home.

It's rare you do the double over Leinster, so expect Leo Cullen's side to come out firing in Belfast.

Ulster won home and away against their rivals in the regular season in 2021/22 for the first time in nine years, but will need to be even better tonight in Belfast to keep up that good record.

While just short of full strength, both sides are pretty close to it; Ulster are without the injured Iain Henderson and James Hume, while Robert Baloucoune is on Emerging Ireland duty.

Leinster, meanwhile, have James Lowe and Hugo Keenan out injured, but Johnny Sexton will make his first appearance of the season off the bench, supplementing Ross Byrne.

While Leinster lost twice to Ulster last season, they're the only defeats suffered by the province in their last 10 Interpros, while they've also won two of their last four trips to Kingspan Stadium.

Ulster's home form has been formidable in the last 18 months, losing only once at home in the URC since April 2021: 17-24 to Munster earlier this year.

Having suffered defeats to both Cardiff and the Dragons, a win can't come quick enough for Munster.

Graham Rowntree is still looking for his first victory as Munster boss, and they will be expected to do the job this Saturday against Zebre Parma in Cork.

Their four consecutive defeats, spanning the end of last season and the start of this campaign, matches their worst ever runs, which they also had in 2023 and 2004.

They've won all 18 of their previous meetings with Zebre though, and put more than 50 points on them when they last hosted them - albeit in Thomond Park - in 2020.

The Italians have lost both of their games so far, but have proven to be an exciting watch, running both Leinster and the Sharks close, while also scoring 10 tries in the process.

Both of those games took place in Italy, however, and a fall-off in their performance is to be expected.

Munster have also lost just once in their last 16 matches at Musgrave Park: 16-28 to Edinburgh in November 2019. 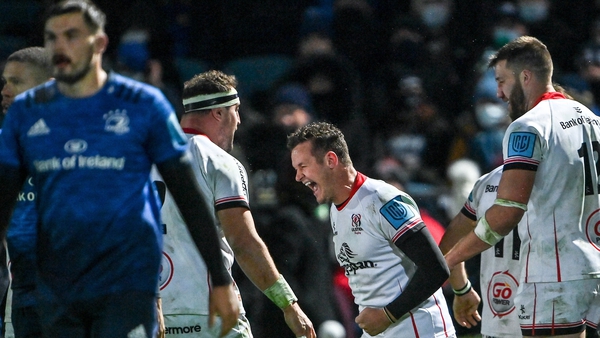 Ulster 'ready to take the next step' this season