Ulster's back-to-back wins against Leinster last season showed they're "ready to take the next step" to silverware, according to the province's former second row Mick Kearney.

The sides meet tonight in Belfast in the BKT United Rugby Championship (live on RTÉ2 and RTÉ Player), having both won their owning two games of the campaign with bonus-points.

Ulster came out on top in both meetings of the teams in 2021/22, first winning at the RDS in November before completing the double at Kingspan Stadium in March, eventually going on to suffer an agonising semi-final defeat against the eventual champions Stormers.

And the recently retired Kearney - who featured in both of those derby wins for Ulster last season - says Dan McFarland's side have every chance of ending their long wait for silverware, which dates back to 2006.

"We had a game plan going to the RDS that worked pretty well," he told this week's RTÉ Rugby podcast.

"It was an effective game plan on the night and thankfully worked out, and when it came to after Christmas in the howling wind and rain we implemented a very similar game plan and it worked again,

And the 31-year-old, who also featured for Leinster and Connacht during his career, believes the northern province are capable of a prolonged period of success if they can get over the final hurdle this season.

"Leinster, from a URC point of view, have been the best, so to beat them home and away gave the group massive, massive confidence.

"The players they [Ulster] have, and the depth Dan McFarland has built, they're ready to take the next step. Now it's just about doing it.

"I think once Ulster do win the URC, or win something, they'll be fully set up to go on and win more and more things. They just have to get that first win under the belt."

Ulster have started the season in impressive fashion with bonus-point wins against both Connacht and the Scarlets, but face a step up in class against Leinster, who have most of their frontline Ireland internationals available for selection.

However, in spite of this, former Ireland international prop Fiona Hayes believes Ulster could make it three wins in a row against their neighbours, particularly if they can keep Leinster's maul quiet.

"Ulster are missing a few big guys like Baloucoune, but I think they have the talent there to take the step up, and go at Leinster," she said.

"Billy Burns looks like a player in form, Cooney is controlling the pack and doing it really well. Treadwell and O'Connor have made a great partnership without Henderson, they just have a lot of players in form.

"The area I think Leinster can attack would be the maul defence. The Scarlets got a bit of change out of them, and they were a bit slow to set up. We know how dominant the Leinster maul is when it gets going. That's an area they'll have focused on.

"I think the game is going to be an absolute cracker. I'm looking at an Ulster win at home, they're very hard to beat up there, they're playing with form. Ulster have come screaming into the season." 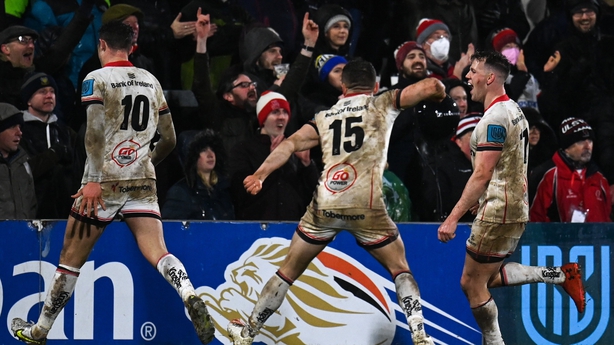 Kearney, who is continuing in rugby with Clontarf in the Energia All-Ireland League, believes the battle at the breakdown will decide it all.

"I think if Ulster can get on top of the breakdown they'll win it, but if they can't, then they won't. That was a massive part of the game in the RDS last season. The likes of Marcus Rea had massive turnovers, Nick Timoney had big turnovers, and it's a big fear for Leinster - and all attacking teams - if their breakdown slows down.

"Ulster had the most maul metres of any team in the competition [last season]. If Ulster are getting turnovers, they're kicking it down the line and mauling. The work that Roddy Grant has done with the forwards, they're a really, really strong mauling outfit."