Pete Wilkins takes his Connacht side to South Africa knowing his last tour will take some beating.

Nine weeks after helping Ireland to a series win in New Zealand, Wilkins is hoping to use the learnings from that tour as Connacht prepare for back-to-back fixtures against the DHL Stormers and Vodacom Bulls.

Wilkins accepted an invitation from Andy Farrell to join the Ireland coaching staff for the five-match tour in July and was "humbled" to play a role in the historic victory.

"I found it immensely valuable," said the Connacht head coach. "Obviously it was a privilege to be involved in terms of being invited, but also then to be able to share in the success they had. I was very humbled by that.

"From a rugby perspective, there were several things that I took out of it that I think we can adopt and put our take on for Connacht. How they train, the intensity they generate within training is a key part in terms of then seeing how that transfers to how they play the game.

"It's something that we have been chasing for the last couple of years, but it's always good to see a different version of good or a version of other people who are seeing it through a different lens.

"How we train, how we prepare to train, how we review training in terms of the messaging we give players – that's been incredibly helpful.

Wilkins said there was no panic in the Connacht camp following their heavy defeat against Ulster in the opening round of the BKT United Rugby Championship. It marked the start of daunting run of fixtures for the western province, with Munster and Leinster visiting Galway once they return from playing both of last season's finalists.

The inclusion of Ireland trio Bundee Aki, Finlay Bealham and Mack Hansen for the South African tour provided a timely boost, and Wilkins is hopeful Connacht captain Jack Carty will be fit to face the Bulls on 30 September.

"There is a good chance of Jack joining the tour," said Wilkins. "He won't be available for selection this week and we will see where he's at for the following week.

"He's at that point now where he is just about ready to play, so we will let him continue his rehabilitation this week in Galway and make a decision at the end of the week. He's tracking well."

Carty remains in Galway for the time being along with Gavin Thornbury and Conor Oliver, who miss the Stormers game due to injury and illness respectively, but the trio could yet play against the Bulls.

Adam Byrne was another notable absentee from the 28-man squad and Wilkins confirmed the former Leinster wing's omission was not injury-related.

"I think we have got real improved depth for those back-three players now," he said. "Adam has done a good job through pre-season and he will get plenty of opportunities this year, but for this two-game block and the travel that's involved we picked a group with, certainly we think quality in it, but also a bit of utility value as well.

"Adam will train hard back in Galway with some of those other guys. We will see him pretty soon." 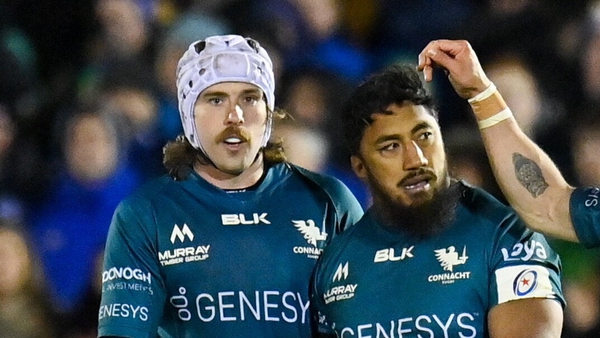