Johann van Graan was left to rue Munster's lack of edge as his team blew their chances of a home quarter-final in the United Rugby Championship.

Needing a bonus-point win against a Leinster side who had rested its entire probable Champions Cup line-up to secure the second seeding, they required at least two points to move into the top four.

In the end, it proved too much for the visitors, who through injury and illness were without a number of Ireland regulars and South Africa’s Damian de Allende.

"The first half, they started well and we came back, I felt we created a lot in the first half and not near clinical enough," he told RTÉ Sport after the 35-25 defeat.

"We created opportunities and we didn’t use them. Against a team like them, they are going to use their chance.

"Straight after half time we started well and then...they scored with that penalty try and we went down to 14 [Niall Scannell’s sin bin] and they scored straight away.

"We are incredibly disappointed and we came here to win tonight and we weren’t clinical enough to do it so fair play to them." 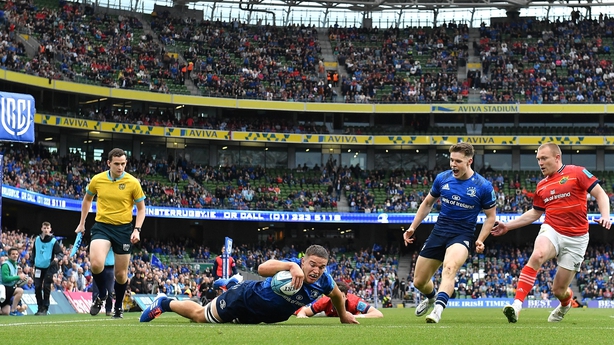 Munster have not won in the Aviva against Leinster since 2014, and Van Graan declined to comment on how disappointing it was given that Leo Cullen had used so many fringe players for the tie.

"I’m not going to get into them resting players, both teams had players unavailable," said the South African, who will move to Bath at the end of the season.

"It was two teams selected, they were better than us on the evening. The difference [from the loss to Toulouse] is we didn’t get knocked out tonight."

The results from the final round of the regular season sets Munster up for a trip to Belfast, where they won four weeks ago, while Leinster will host Glasgow.

He added: "That’s the way the chips have fallen now. We performed well the previous time we went up there but this is going to be a knock-out game, a quarter-final to progress further in the competition.

"Ulster are a quality side, a good forward pack with a good kicking game. It will be a new competition now, eight teams in it and if you want to go further you’ve got to win your quarter-final and that’s what we need to do against Ulster." 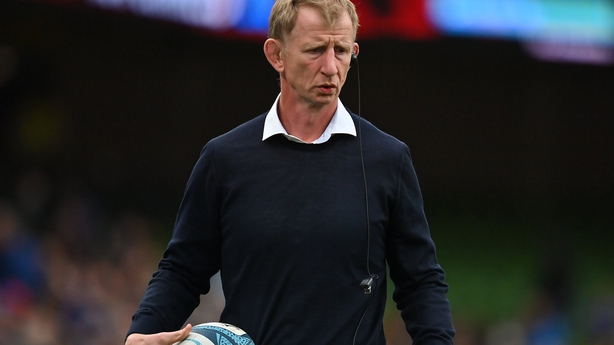 Leinster boss Leo Cullen, who now prepares for next weekend’s Champions Cup final against La Rochelle, was pleased with how his squad finished out their regular season.

"It was a really pleasing result, and lots of good stuff in the game," he said.

"Right from the start Ryan Baird goes up, gets a hand on it, we get the ball down and it leads to a score inside the first couple of minutes of the game.

"Munster had their moments as well.

"One of the most pleasing parts is probably the start of the second half, Munster get that try, the ball goes up in the air and they get the bounce and it was a little bit of fortune, obviously they take the try.

"But the composure of our guys, particularly with some young guys, would they get themselves back into the game?

"But, to be fair, they get a fair bit of control back into the game and produce plenty of moments.

"The penalty try leads to a yellow card for them and suddenly we're in the ascendancy, guys coming off the bench made decent impacts as well, so plenty of good stuff I have to say, which is great.

"Overall we’re delighted to get the win. You see guys growing in terms of the experience bit, and you want them to be better in the future. And to get through that in front of over 30,000 people, it’s fantastic." 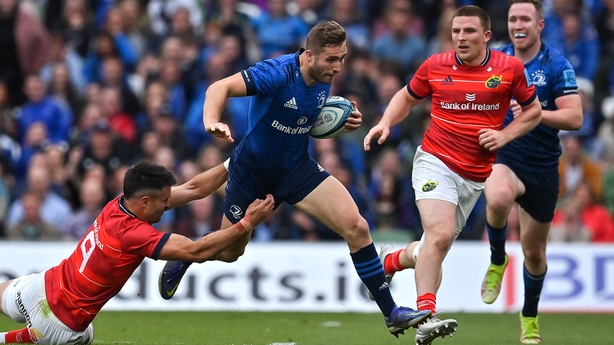 Ciarán Frawley did not return to play after a head injury assessment but Cullen confirmed that it was a cut that prevented the centre, who was in the match-day squad against Toulouse, from resuming, while also hailing the performance of the returning Jordan Larmour, who was named man of the match.

"It was great for him, and very, very pleasing," he said.

"That's what we said about guys timing their run at this time of the year. So yeah, there’s plenty for us to think about for sure.

"[Ciarán] had a cut on his chin as well, so he’s come through his HIA piece but he ran out of time because he was getting his chin stitched.

"Anyway, that was the decision that was made there but he’s come through his HIA already."

Munster set for away trip after loss to Leinster