Billed as something of a dead rubber for Leinster, who had already claimed the top spot in the United Rugby Championship, someone forgot to tell their players.

On the other side of the equation, the Stormers' 26-21 bonus point win over Scarlets earlier meant that Munster needed a bonus-point win of their own to overtake the South Africans and secure the second seed for the play-offs.

But Leinster, with tries from Scott Penny, Cormac Foley, Rory O’Loughlin and a penalty try, plus 13 points from the boot of Harry Byrne, were fully deserving of their win, punishing a visiting side, who started the game as favourites, for too many mistakes.

The final result meant Munster finished sixth in the table and will face Ulster away in the quarter-finals in two weeks’ time.

The failure to pick up a higher seeding may also mean a third trip to South Africa should they win in Belfast, and depending on how the other games play out.

Leo Cullen may have rested most of their regulars ahead of next Saturday's Heineken Champions Cup final against La Rochelle but it would have been hard to spot the difference after the opening passage of play.

A short kick-off, quick ball, line breaks and direct running made space for Ciarán Frawley in the back line. The centre, who later retired after a head injury assessment, spotted Penny on the sideline and put his kick into the back row’s belly.

From there, Penny sidestepped Joey Carbery and Leinster had a score within two minutes.

Sloppy at the breakdown throughout the half, Munster were penalised for going off feet six minutes later, which allowed Byrne to extend the lead.

Perhaps Jean Kleyn should have gone in the bin for a high tackle on Thomas Clarkson before that, but referee Frank Murphy saw it otherwise and they had a full complement when Jack O’Donoghue finished off in the corner. 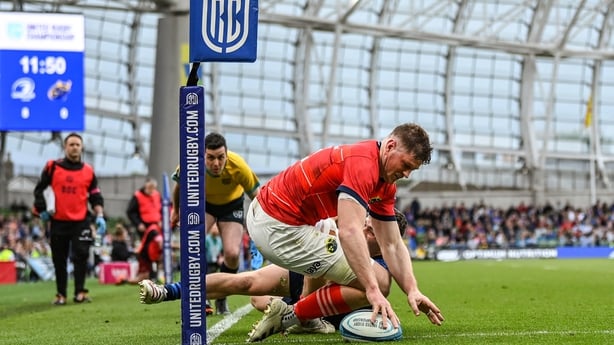 Standing in for O’Mahony, the captain took Keith Earls' long pass and beat Rob Russell on the outside.

It was a terrific watch for the 32,411 that showed up on an overcast but warm evening in Dublin 4.

Niall Scannell made a beeline along the touch that earned Munster another lineout in the corner; this time Mike Haley was most alert when the play broke down in midfield, seeing a gap in the Leinster defence and running under the posts to give Munster a lead, which didn’t last long.

After returning from a hip injury, Jordan Larmour was at full-back for Leinster and his weaving run that started inside his 22 beat four defenders. 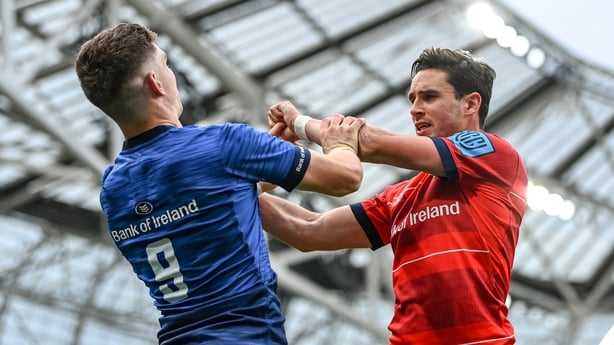 More quick ball and a clever pop from Jamie Osborne sent Frawley clear and he had scrum-half Cormac Foley in support for an unhindered run-in.

Munster were wasting possession, however, and twice Scannell got turned over at the breakdown.

The hosts, who had lost their last two URC games, then lost Rob Russell to a yellow card for a slap down as Alex Kendellen tried to move the ball wide.

It didn’t take long for Munster to hit back and when Osborne failed to deal with a high ball, Conor Murray was on hand to sweep up the scraps, running on the loose ball for a try that Carbery converted. 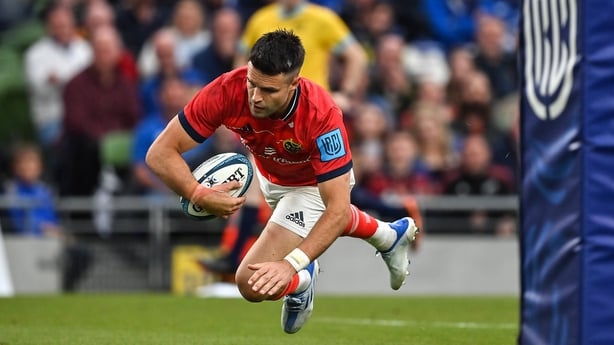 The Ireland out-half and Byrne then swapped penalties as the sides kept up a high tempo, the crowd cheering Foley’s super 50:22 kick.

That was the catalyst for a penalty try, which Frank Murphy had no hesitation in awarding when Scannell took a maul down. The hooker also spent the next ten minutes in the bin.

Another Larmour break then created space out wide and O’Loughlin sped in for another converted try to hand the URC champions a 32-22 point lead.

Cullen had said during the week that there were still opportunities for players to work their way into his match-day squad for the trip to Marseille and the 2018 Grand Slam and Champions Cup winner, named man of the match, did his chances no harm. 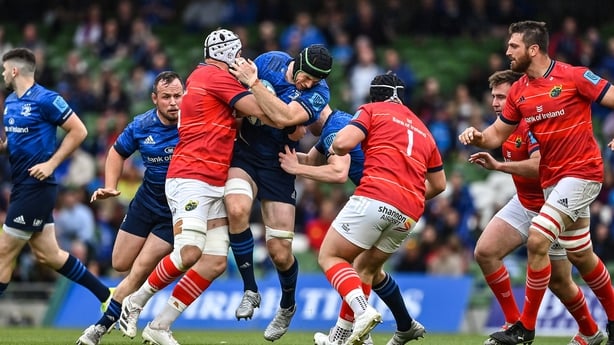 It was all happening.

Earls had a try ruled out, Ben Murphy came on for his Leinster debut and became the 60th player to see action this season for the province, Conway pulled up with a leg strain and was replaced by Ben Healy. Devin Toner came on to a huge applause. Kendellen went off for a HIA.

At this stage, Carbery had kicked a second penalty, which had put Munster within seven and the 'as it stands’ table had them facing an away tie against the Bulls.

However, Byrne kicked a penalty with nine minutes to play, extending the margin to ten points and despite a late Munster flurry, they never really looked like getting a fourth try, which allied to a losing bonus point would have pushed them into the top four.

It’s not the way Johann van Graan would have wanted to finish the regular season but they can take comfort in the fact that they did win in Ulster earlier this season.