With many of their URC play-off rivals not in action until tomorrow, this was a chance for Munster to lay down a marker early in the weekend.

And while it wasn't perfect from Johann van Graan's side, they got the job done, their bonus-point 42-21 win against Cardiff seeing them climb up above the Stormers into second place, for the time being at least, and put an extra bit of heat on the Sharks and Ulster behind them.

Whatever happens between now and their Round 18 meeting with Leinster at the Aviva Stadium, a home quarter-final is now in Munster's hands. Win against Leinster in May, and a top four finish is theirs.

It would mean at least one more Thomond Park outing for Van Graan before he departs to Bath this summer, but tonight he got to say goodbye to Cork, in what was his last outing as Munster boss at Musgrave Park.

With so little between the second and eighth in the table, the head coach was taking no chances with his team selection, even ahead of a Heineken Champions Cup quarter-final against Toulouse to come next Saturday.

Peter O'Mahony, Simon Zebo and Conor Murray all came back into the lineup following last week's vital win against Ulster, while Mike Haley, Chris Farrell and Jack O'Donoghue were among the frontline players who stayed in the starting XV.

And the strength of the lineup ultimately proved the difference. At times in the first half Munster looked cold, and feeling the impact of four bruising weeks against Leinster, Exeter and Ulster.

They conceded two tries in a sloppy first quarter, but always looked threatening with the ball in their hands, moving the ball and taking risks. 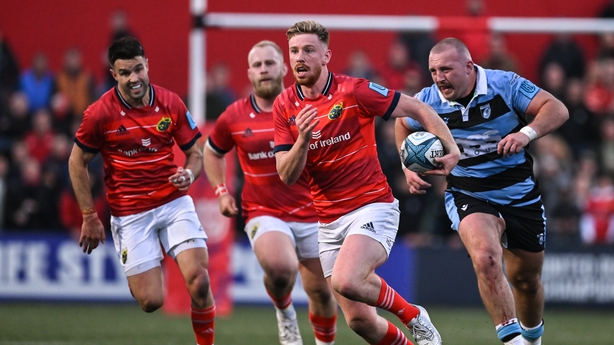 Ben Healy and Haley were a constant nuisance to the Cardiff defence, and shared 22 of the 27 points in the first half, with Haley's two tries supplemented by 12 points off Healy's boot, and a further try for Thomas Ahern.

And while Cardiff threatened a second half comeback, the introduction of Craig Casey on the hour mark injected pace into the hosts, and his two tries secured maximum points, sending them back up to second in the table.

Fourteenth place Cardiff only had pride to play for after a season heavily disrupted by Covid-19 postponements, although they had already shown this season they could play the role of disruptors, having beaten Leinster back in January.

If Munster needed a reminder that they needed to do more than show up, the got a couple early on, the first being a scuffle between both sets of players inside the opening minute, before Cardiff hit them with a try.

After kicking a penalty to Munster territory, Cardiff hit Munster with big carries up the guts of the pitch from both Dillon Lewis and Ray Lee-Lo, before moving the ball wide.

Hallam Amos caught Murray flat-footed and got to the edge of the defensive line, before his simple pass outside found lock Seb Davies who crashed over to score, with the conversion from Jarrod Evans making it 7-0. 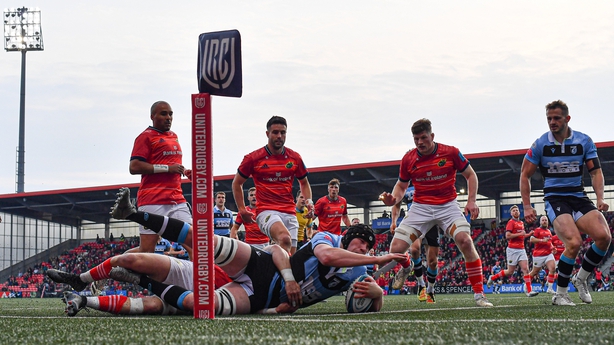 It was a slap in the face to wake Munster up, and once they got their hands on the ball they looked sharp, finding the equalising score on five minutes.

Healy and Farrell both gained ground with strong carries, before Zebo's meandering run disjointed the visitors' defence. From the resulting breakdown Munster ran it through the hands, with Rory Scannell's and O'Donoghue's passes sending Mike Haley over to score.

The conversion from Healy levelled it, but Cardiff continued to bring it to Munster in the opening quarter.

Hooker Kristian Dacey was held up over the tryline by a combination of John Ryan and Jean Kleyn, but the respite was brief, Lee-Lo crossing for Cardiff's second try moments later, as he finished off an overlap following excellent work from Amos and Owen Lane.

While the defensive structures for both sides were getting torn apart, the last ditch defence was something altogether different. Twice in a matter of minutes Zebo got over the tryline, but each time he was thwarted by incredible recovery tackles, first getting tackled into touch by Lane moments before he grounded the ball, before Amos and Max Llewellyn held him up over the line. 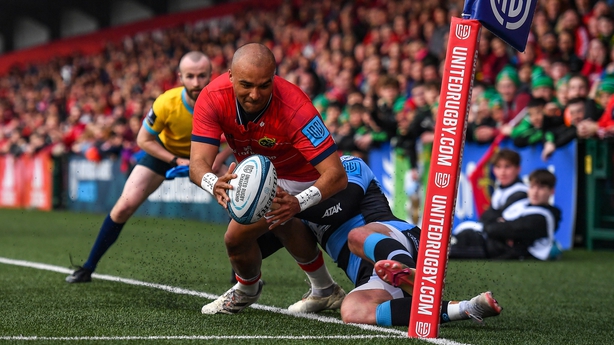 Both sides were taking chances, but at times the game was frantic, and when Munster were awarded a penalty on 18 minutes Healy wisely called for the tee, and his routine kick cut the deficit to 14-10.

The home side finally led on 26 minutes with Haley scoring his second try of the game. The full-back started and finished the move, initially claiming an excellent high ball in midfield, before a winding run brought Munster into the Cardiff half. O'Donoghue's offload sent Diarmuid Barron through a gap in midfield, before Farrell rampaged his way into the 22.

And with the Cardiff defence scrambling, Haley found a gap to cut back inside and get in under the posts, before the conversion from Healy sent them 17-14 in front just before the 30 minute mark.

It was a lead Munster wouldn't give up for the remainder of the game, and no coincidence it came just as Cardiff lost full-back Amos to injury, the 27-year-old had been central to both the attack and defence of the blues, but was carted off with a leg injury shortly after Haley's second try.

On 32 minutes Munster nudged their lead out to 20-14, with Healy kicking his second penalty of the night after Cardiff failed to roll away at the ruck. 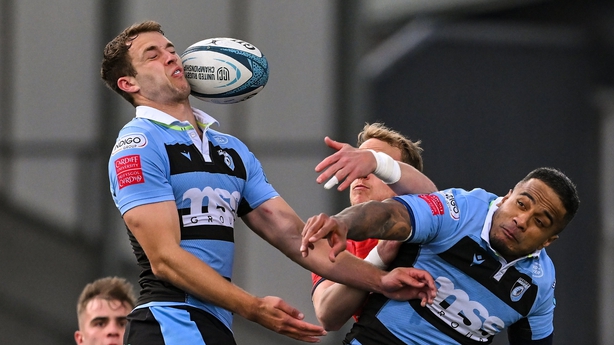 Everything good Munster moment seemed to either have Healy or Haley at the heart of it, and it was the out-half's counter attacking run from deep that led to third try right on half time.

After Healy brought Munster into the 22, Calvin Nash drifted infield and found a gap to bright them close to the line, and while Haley was stopped short of the line, Ahern followed up with the carry from close range to score.

The conversion made it 27-14 at the break, Healy maintaining his 100% record with his fifth kick of the night send Munster into the half-time break with a healthy lead after blowing hot and cold during the first 40.

The result wasn't beyond doubt, but the bonus-point try was a must for the hosts in the second 40, and the sooner they got it the better in front of 7,325 at Musgrave Park.

They struggled to gain an attacking hold early in the second half, and were made to pay on 55 minutes when scrum half Lloyd Williams sniped at the base of a ruck to run in from the edge of the 22 for a third Cardiff try.

After Evans converted, the Munster lead was down to six points at 27-21, but Healy eased tensions somewhat five minutes later when his third penalty of the night made it a nine-point game. 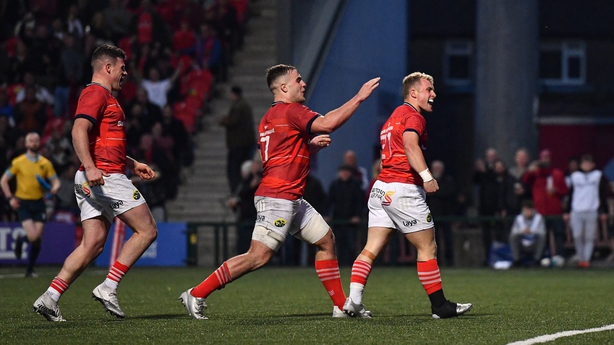 It was Healy's final act, as Van Graan changed up his half-backs, introducing Joey Carbery and Craig Casey, and the pair made an instant impact, hitting Cardiff for the bonus-point score on 63 minutes.

Casey's arrival saw the pace of Munster's attack lifted, and it was he who ran in under the posts to score after both Jason Jenkins and the relentless O'Donoghue had gained ground with carries. It had been a fast and efficient Munster attack, with Casey touching the ball nine times in the lead-up.

It was 37-21 to Munster with less than 15 minutes to play, but Cardiff continues to attack, with Lane getting on the outside of Shane Daly, only for some resolute defence in their 22 to hold the visitors.

And after an outstanding clearing kick from Haley pinned Cardiff back into their 22, Munster pounced for their fifth try to kill the game off on 77 minutes, Casey taking a quick-tap penalty to scamper over for his second try.

Carbery was wide-left with the conversion, but the night's work was done, the 42-21 victory keeping a firm grip on a home quarter-final ahead of next month's final round against Leinster at the Aviva. 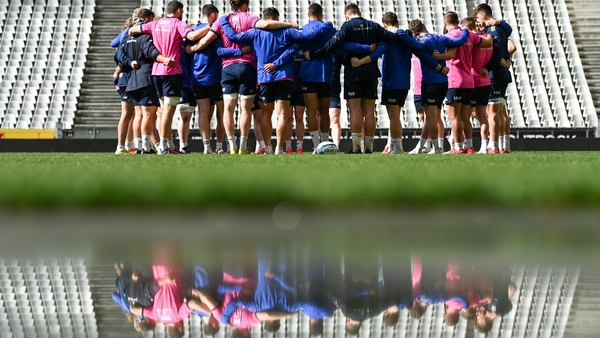 United Rugby Championship Round 17: All you need to know