There's mixed news on the injury front for Connacht ahead of Saturday's United Rugby Championship meeting with the Sharks in Durban.

Back row Paul Boyle and prop Jack Aungier have also been limited in training, Boyle rehabbing a toe injury, while Aungier is following the return to play protocols for a head injury.

In good news, Finlay Bealham is set to return this Saturday against the fourth place Sharks.

The Ireland international tighthead sat out last weekend's first tour match with the Lions, but senior coach Pete Wilkins says he is fully recovered from the head injury he suffered in their Heineken Champions Cup last 16 second leg against Leinster on Good Friday.

"Finlay is available and ready to go. He bounced back well from that head knock, probably the turnaround time with the travel and the adjustments, but otherwise he would have been available for the Lions game," Wilkins said.

"With these injuries we want to be as careful as possible. He'll be good to go this week." 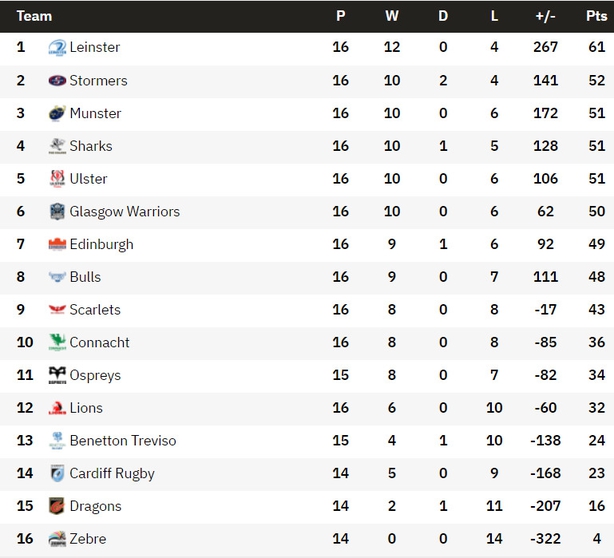 While Connacht's play-off hopes are over in spite of last Saturday's win against the Lions, they could potentially play a pivotal role in the make-up of the quarter-finals.

With the Sharks in fourth place, and level on points with both Munster and Ulster, a win for Connacht at Kings Park on Saturday afternoon would lob a grenade into the playoff picture, and be of huge benefit to their Irish neighbours.

But while Wilkins says they're well aware of the implications a win for them would have, it won't have any real impact on their preparation or motivation.

"I think everyone is aware of that from a coaching and playing point of view, and the nice thing about that is the more opposition teams are under pressure to get results, and the greater the implications for them in terms of wins and losses, it can feed into how they approach the game emotionally and can play in your favour in terms of the pressure it generates.

"In terms of us getting motivation from that, probably not so much. I think you might have a wry smile after the event, but for us it's more about wanting to get another win against a South African side, finishing the season as strongly as possible.

"I know we repeated this phrase a few times, but getting our game out there from an attack and defence perspective, assert ourselves, and earn the right to play. Our motivation would be more on ourselves, but there's definitely an awareness of the context as well."