Ireland international Jordi Murphy will make his first appearance of the season for Ulster in tomorrow night's United Rugby Championship meeting with Cardiff [live on RTÉ2 and RTÉ Player].

The former Leinster man returns at blindside flanker having recovered from consecutive foot and knee injuries.

Dan McFarland has been able to pick a strong starting XV for the visit of the Welsh side, with Iain Henderson captaining the team at lock after missing Ireland's win against Italy due to Covid-19.

He forms a new second row partnership with Alan O'Connor, among five changes from their win against the Dragons a fortnight ago.

Murphy replaces David McCann in the back row, linking up with Marcus Rea and Nick Timoney, while Duane Vermeulen provides a wealth of experience off the bench.

With Tom O'Toole injured, Marty Moore returns at tighthead where he packs down alongside John Andrew and Andrew Warwick.

In the half-backs, Nathan Doak and Billy Burns start together again, although John Cooney is available off the bench having recovered from a calf injury.

James Hume and Stuart McCloskey form their familiar centre partnership with Rob Baloucoune and Ben Moxham continuing on the wings, and Stewart Moore is picked at full-back. 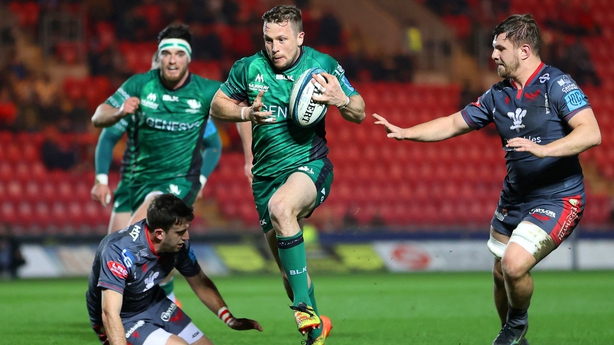 Jack Carty [above] and Dave Heffernan are among seven changes for Connacht, as they look to continue their good recent form in the URC.

The pair start tomorrow night's trip to Edinburgh, with Andy Friend's side will look to make it three wins out of three.

With a short turnaround from last week's win against the Stormers, Friend has rejigged his team for Friday night's trip to Scotland, but just two of those changes come in the back line, with Carty and Caolin Blade coming into the half-backs, as Kieran Marmion moves to the bench, and Conor Fitzgerald misses out.

The rest of the back line is unchanged, with Tom Daly and Sammy Arnold continuing their good recent partnership in the centre, and Peter Sullivan and Alex Wootton starting on the wings either side of John Porch.

Five of the changes come in the pack, with an all new front row of Heffernan, Jordan Duggan and Jack Aungier.

Leva Fifita continues in the second row having impressed against both the Scarlets and Stormers, where he is partnered by Oisin Dowling as Niall Murray drops to the bench.

And the final change comes in the back row, Conor Oliver comes into the starting line-up in place of Jarrad Butler, who is part of a 6:2 split among the subs.

RTÉ Rugby podcast: What did we learn from Italy win? Do England lack cutting edge?