For the second year in a row, the layout of the Guinness Six Nations fixtures has served Ireland well.

Saturday's defeat to France was probably the most physically taxing game Ireland will play in the tournament, just as it was 12 months ago when they met in Round 2.

With respect to Italy, their Round 3 meeting at the Aviva Stadium is certainly Ireland's most straightforward game of the championship, and with that sandwiched between the two break-weeks, it gives Andy Farrell opportunity to make a couple of alterations to his side while not losing stability, as well as giving the coaching team time to iron out some issues ahead of the visit to Twickenham on 12 March.

In 2021, Farrell made seven changes from France to Italy, although the circumstances were much different.

Twelve months ago, the game in Rome was used as a bridge for returning frontline players like Johnny Sexton, James Ryan and Tadhg Furlong to get back up to speed, although he did also use that game to spread some minutes around his squad.

Dave Kilcoyne and Ronan Kelleher were both rotated into the starting team, while Craig Casey and Ryan Baird made their debuts off the bench.

It's highly unlikely that Farrell will make that many alterations for the visit of Italy, sweeping changes rarely happen by design in Test rugby.

But there are certainly a couple of areas he could look to build some extra game time into, or some bodies he may want to either rest or test. That's where the United Rugby Championship comes into the picture.

While all four provinces played a game each during the opening two weekends of the Six Nations, this fallow week sees all of the Irish teams in action; Munster host Edinburgh on Friday night, Leinster and Connacht play Saturday against the Ospreys and Scarlets respectively, while Ulster are in action Sunday away to the Dragons.

And while a small number of players were released back from Irish camp for URC games in the last two weeks, a much larger number will return to provincial action this weekend, many of whom have had no game time since the final round of the Heineken Champions Cup pools.

Gavin Coombes of Munster is someone who could stand to play a major role this Friday night, and is even getting a head start on his rivals when it comes to making an impression.

The number 8 hasn't been able to stamp his presence on the national team since his two caps last summer, with illness seeing him fall to the fringes of the squad for the Autumn Nations Series.

Coombes led Munster in 'defenders beaten' and 'metres gained' in Friday's defeat to Glasgow having been released from the Ireland camp.

However, with Jack Conan having a rare off-day for Ireland in Paris on Saturday, and Peter O'Mahony's status for Round 3 unclear due to the head injury he suffered, it leaves room for a back row player to make a big impression.

At the moment, it looks like Coombes and Nick Timoney are scrapping it out to be next man up in Ireland's back row rotation, and the Ulster man is also someone who could make an impression this weekend, when Dan McFarland's side take on the Dragons at Rodney Parade.

What's interesting is they both excel in areas Ireland struggled in against the French; Coombes has the type of power that Ireland arguably missed in Paris, while Timoney has set himself apart by his ability to win ball at the ruck, again an area that France got on top of Ireland at.

In the front row, it's expected that Farrell will stick with Andrew Porter and Tadhg Furlong in his starting team, while either Dan Sheehan or Rob Herring will likely step in should Ronán Kelleher fail to recover from the shoulder injury he suffered against France.

With both Sheehan and Herring remaining with Ireland for their two-day camp this week, it's unlikely Dave Heffernan can turn Farrell's head sufficiently to make it back into the squad for the next round.

With Johnny Sexton still making his way back from a hamstring injury, Jack Carty is unlikely to displace Joey Carbery after the latter's excellent performance in Paris, however, a string running from the Connacht captain against the Scarlets may convince Farrell to stick with his two out-halves from Paris, and give Sexton an extra week to get back up to speed.

But in both prop positions, there is the potential for Farrell to change up his bench.

With both Cian Healy and Dave Kilcoyne released back for the URC this week, a big game from Kilcoyne against Edinburgh could see him get the 17 shirt at the expense of Healy, who has played just 22 minutes off the bench in the opening couple of games.

Interestingly, Finlay Bealham will remain with the group rather than head back to Connacht training at the Sportsground, ahead of their visit to Llanelli.

Like Healy, Bealham has played off the bench in the opening two games, although he got close to 30 minutes in the opener against Wales.

The 30-year-old looks set to be Furlong's deputy again against the Italians, barring a truly exceptional performance from Tom O'Toole (below) with Ulster. 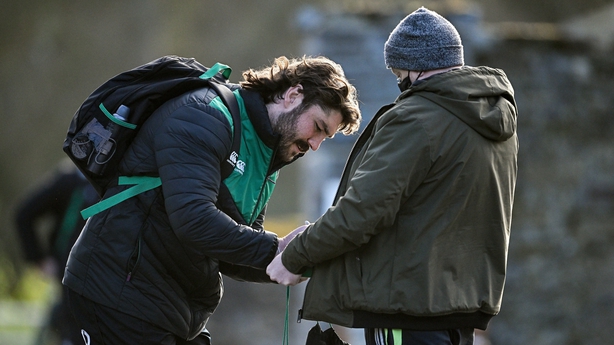 Iain Henderson's return from injury squeezed Ryan Baird out of the matchday 23 last week, but with O'Mahony being forced out of the France defeat due to a head injury, Baird could come back into the reckoning for a bench spot against Italy should he go well for Leinster this week, with his versatility an added bonus point.

There appears to be a lot less wiggle room in the backline.

With Johnny Sexton still making his way back from a hamstring injury, Jack Carty is unlikely to displace Joey Carbery after the latter's excellent performance in Paris, however, a strong running from the Connacht captain against the Scarlets may convince Farrell to stick with his two out-halves from Paris, and give Sexton an extra week to get back up to speed.

James Lowe looks set to return from the hamstring injury that cost him his place in the squad for the opening two games of the tournament, with Leinster taking on the Ospreys on Saturday evening.

The winger already has credit in the bag with Farrell after his return to form in November, but displacing Mack Hansen from the 11 shirt will take an explosive performance this week, after the Connacht man hardly put a foot wrong in his first two games of Test rugby.

Likewise, Robert Baloucoune was outstanding when released back to Ulster for their interpro with Connacht earlier this month, but Farrell seems to have settled on Andrew Conway being his 14 for the immediate future.

The possibility of moving Conway to 15 remains alive as a test run for a future injury to Keenan, but while the Leinster full-back didn't enjoy his best day at Stade de France, it's unlikely to see him budge from the line-up any time soon.

Follow all of Ireland's Six Nations games via our live blogs on rte.ie/sport and on the RTÉ News App or listen to live radio coverage on RTÉ Radio 1. Watch live TV coverage of England v Ireland (12 March) on RTÉ2 and the RTÉ Player. 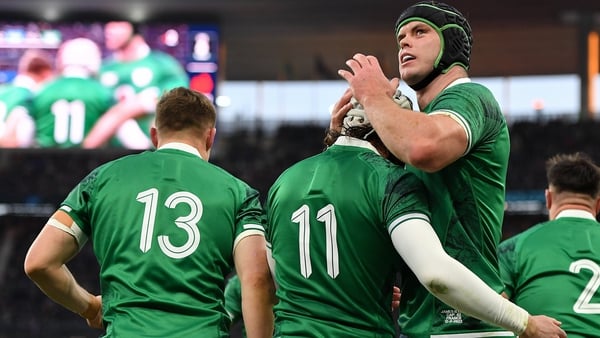 France in 'pole position' but Ireland must keep pressure on, says Farrell