Mike Prendergast has seemingly taken himself out of consideration for the vacant Munster coaching job, dismissing reports he could return to the province.

The former Munster scrum-half has carved out an impressive reputation in recent years as attack coach with Racing 92 in Paris, and had been tipped by many - including his former Munster team-mate Ronan O'Gara - for a return to Limerick in the summer, either as an assistant or head coach.

However, speaking to Johnnie Beattie and Tim Groves on 'Le French Rugby Podcast', Prendergast distanced himself from suggestions he is in the frame to rejoin his home side.

"No, no, there's nothing in it," Prendergast said, when asked about O'Gara's suggestion that he could return to Munster.

The 44-year-old says the speculation is a natural result of him being a former Munster player, joking that O'Gara was simply looking to stir the pot.

"The Munster job, a couple of coaches are leaving at home and there are obviously an array of Irish coaches that have come abroad in France and England.

"Once coaches move on, there's a natural reaction (for supporters) to go 'we've got coaches in France, La Rochelle, Racing'.

"I'd be very tight with ROG, we'd call each other a couple of times a week, just exchanging rugby philosophies, general chit-chat, we know each other a long time.

"He's only writing his article, he's trying to fill it!" Prendergast laughed.

Prendergast has now joined O'Gara and Paul O'Connell in distancing themselves from a return to Munster.

The province are set to lose three of their four-man coaching team in June, with defence coach JP Ferreira the latest to announce he would depart, as he follows Johann van Graan to Bath.

Forwards coach Graham Rowntree is signed up for two more years in his current role, but also seems to be a candidate to potentially be promoted to head coach.

It's believed Munster could reshape their coaching structure and employ a director of rugby, with their former Heineken Cup-winning boss Declan Kidney being named as a potential candidate.

Kidney has been working in a similar role with London Irish in the Premiership since 2018. 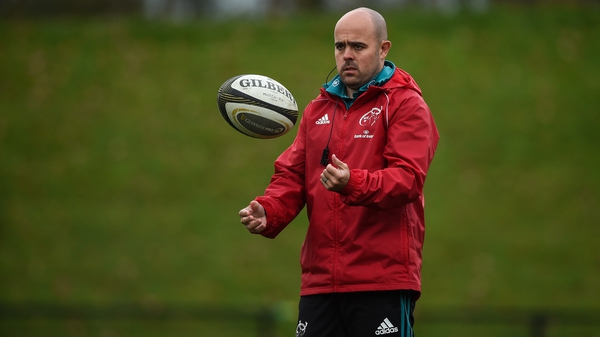