As they have said on a number of occasions this season, Connacht's approach centres around a philosophy of "Fast, Relentless, Adaptable".

And while they've shown those traits at various stages in the United Rugby Championship, as has often been the case with Connacht, the one missing ingredient has been consistency.

With one win from their opening four games, and sitting 13 points back from the other Irish sides in both the league table and the Irish Shield, they're entering must-win territory against Ulster this Saturday.

It's a home game for Connacht, but a game that's been moved to the Aviva Stadium after the IRFU extended the invite to the Irish provinces.

And while there will be no Covid-enforced cap on attendance, a disappointing uptake in ticket sales means they're expecting a crowd in the region of 6,000-8,000 in Dublin on Saturday, still almost double what they have been able to accommodate at the Sportsground so far this season.

While there has been some backlash in Galway to the change of venue, it's a change that may suit the players.

The Aviva Stadium has a fast track, one suited to Connacht's approach of 'Fast, Relentless, Adaptable', and while rain is forecast in Dublin on Saturday evening, it may allow for an open game of rugby.

Flanker Conor Oliver says he's hopeful that's the case, adding that his team are generally suited to playing on artificial or hybrid surfaces.

"I always like playing on 4G or faster surfaces, so I think it suits our running game and the way everyone wants to play, so I'm looking forward to it," he said.

"Ulster also run the ball so it will suit their game also, but I think it will be a really good game.

"Hopefully, not too close on our end but it will probably go down to the wire."

Andy Friend's side will be hopeful of history repeating itself on Saturday.

In August 2020 his side played back-to-back games at the Aviva as rugby returned from their Covid-19 break, playing some brilliant rugby in a 26-20 win against the northern province at Irish Rugby HQ, before their second string were soundly beaten by Munster a week later.

Having featured in both of those games, Oliver says they felt comfortable away from the Sportsground, having won less that 50% of their games in Galway since the start of last season.

"We're really looking forward to it.

"Last season, obviously, we had the two games there without the crowds and we still really enjoyed them. It's a great venue, the pitch is amazing and having the fans there is going to be unbelievable.

"The more people we can get to the game, the greater the occasion, and we’re really looking forward to it.

"There is a lot of excitement, it’s a big occasion," he said. 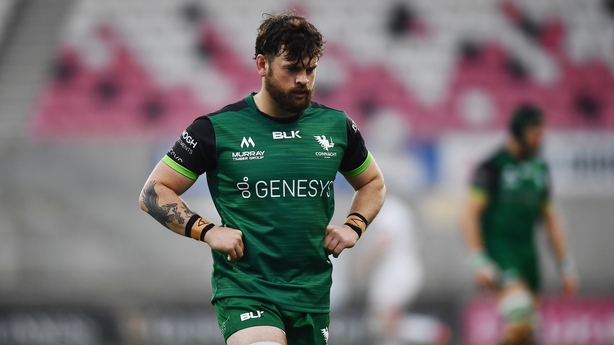 The Dublin native is in his second season at the province, having joined from Munster in the summer of 2020.

The 26-year-old has been a regular presence in the Connacht matchday squad since his move to Galway, playing in three of their four games so far this season, including the full 80 minutes against his former side at Thomond Park last week.

It's been a move which Oliver says is bringing out the best in his game.

"I feel the coaches here are filling me with confidence as well.

"They are kind of letting me go about my game the way I would like to. It suits me, our game plan and stuff and every week I'm trying to perform to my best, give it 100% and that's the way I like to play the game and I’m happy with it.

"I’m playing with a lot more confidence, I feel.

"I think if you ask any player, when they are confident you play what’s in front of your face and you back yourself when you have the backing of coaches. They encourage you to go for it and not hesitate, which maybe I had last season but this season I feel as if I’m just not hesitating and I go for it. It seems to be working out well."

'I might make a few calls' - Andy Friend still looking for clarity over controversial Munster try.