Having secured dominant bonus point victories against the Sharks, Stormers and Scarlets, his side had to dig deep to make it four wins from four against Connacht. Diarmuid Barron's 79th minute try drew them level before Joey Carbery's conversion nudged them into a game-winning 20-18 lead.

Despite dominating possession (65%) and territory (60%), handling errors and a sloppy lineout had seen Munster fail to capitalise on a number of promising attacking opportunities throughout the game.

The lead changed hands on a number on a number of occasions, with many of the 17,192 supporters wondering if it would be a repeat of Connacht's Rainbow Cup victory at the same venue in May.

"I'm glad that it's finished," were the relieved words of Van Graan to RTÉ Sport after the game.

"It was a very physical interpro.

"Both sides gave it all they got, small margins in this game, that's the beauty of Irish rugby, all four teams are giving it everything they've got.

"We weren’t accurate enough in the first half specifically but good teams score when it matters and I believe the try before half-time was a big moment.

"We had a very strong wind in the second half and from a territory point of view we managed it pretty well and mentally to come back from the charge down and finish the game, I think the team did pretty well."

Van Graan also praised Carbery for his mental strength to hit the winning points, bouncing back from the moment which could have handed victory to Connacht.

Jack Carty more than atones for his earlier missed conversion, as Joey Carbery is punished for his casual play.

Seven minutes earlier, the out-half saw his clearance kick clocked down by opposite number Jack Carty, who ran in under the posts to send Connacht in front and potentially win the game.

"In every game, specifically as a 10, you’ve got up and down moments.

"The important thing for him mentally is that he stayed in the game and that is the sign of a class player to kick that conversion, but it is a 23-man effort, everybody worked hard to get that field position."

Carbery played the full 80 minutes as academy out-half Jake Flannery watched on from the bench, with Ben Healy rested for the game, following his start in Llanelli last week.

And with Jack Crowley in AIL action for Cork Constitution against Clontarf, Van Graan says it emphasises the depth they have in that position.

"The game was so tight, unfortunately we couldn't get someone like Jake Flannery on tonight, which is a huge part of our plans going forward.

"We had two 10s who didn't play. Very glad for Joe but it's a huge squad effort," he added. 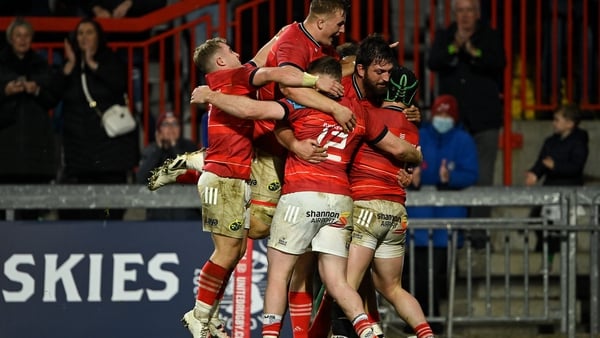