Conor Fitzgerald came back to haunt his home province as his 14-point haul helped Connacht beat Munster 24-20 and claim only their second win at Thomond Park since 1986.

Former Munster prospect Fitzgerald piled up a dozen points, including a crisply taken 26th-minute try, to steer Connacht into a 17-14 half-time lead.

Munster had replied with forwards-inspired tries from James Cronin and Rhys Marshall, although a restart blunder allowed Sam Arnold over for the visitors’ second score.

Still the table toppers made sure Shane Daly’s sin-binning was not too significant, and they negated Kieran Marmion’s try with penalties from Ben Healy and replacement Joey Carbery.

Andy Friend’s men, who leaked 50 points to Leinster last Saturday, stood firm, though, with an inspiring defensive performance to match their last success in Limerick in 2015. 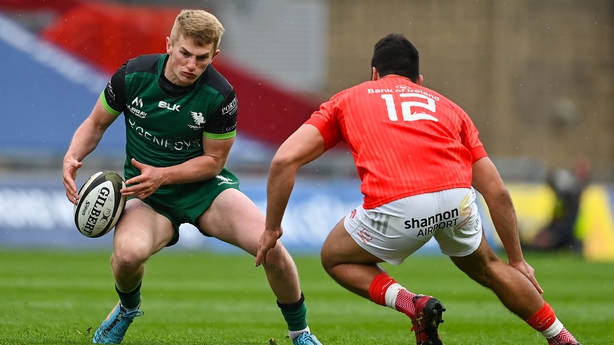 Fly-half Fitzgerald kicked Connacht ahead from a fourth-minute penalty, just reward for a nice chunk of early territory.

Munster did what Leinster had achieved last week, hurting the Westerners through the forwards to put prop Cronin over for Healy to convert.

However, the hosts failed to gather the restart and Arnold, another ex-Munster player, swooped to score in the right corner. Fitzgerald's well-struck conversion made it 10-7.

The night got even better for the 23-year-old when he glided inside Dan Goggin to score at the posts in the 26th minute. 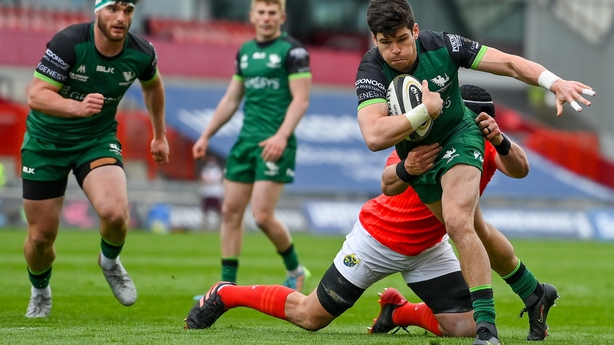 Fitzgerald converted his try as Munster were made to pay for winger Daly’s yellow for a deliberate knock-on.

Yet when the Cork native returned, the Munster maul drove hooker Marshall over to close the gap back to three points, six minutes before the break.

Just over a minute had elapsed in the second half when Munster, guilty of overplaying, allowed Connacht to counter with the boot and Marmion gobbled up the loose ball to go in behind the posts. 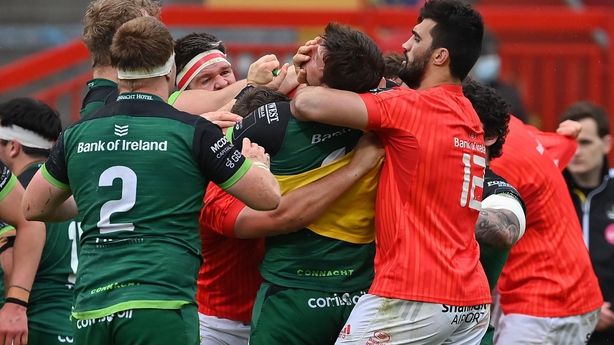 The niggle was never far away – referee Dan Jones and his assistants had their work cut out for them – and things bubbled over again after Munster had gone over through captain Peter O’Mahony, only for the score to be disallowed for obstruction.

Healy knocked over a booming penalty from his own half to leave seven between them, before some superb Connacht defence ended with replacement Denis Buckley winning a crucial turnover penalty.

Although they continued to fall foul of Jones’ whistle, Munster appeared to have the trump cards in bringing on Lions duo Tadhg Beirne and Conor Murray. The freshly-introduced Carbery cut the gap to four in the 64th minute.

Carbery’s cross-field kick then set up a try for Andrew Conway – only for TMO Joy Neville to spot a knock-on at a prior ruck by Damian De Allende.

She was involved again with a last-gasp captain’s challenge, confirming a knock-on to complete a frustrating night for Munster.