Leinster forwards coach Robin McBryde says the early signs have been positive from their decision to swap props Andrew Porter and Cian Healy.

Healy, who turns 34 on Thursday, made the switch to tighthead over the summer, while Porter has gone the other way, as the province try balance their depth across the front row.

Despite being picked for the British and Irish Lions tour to South Africa, Porter has moved back across the scrum, having initially played there for Leinster, as well as Ireland U20.

It's a switch that had been touted for some time, but became more of a reality when Leinster confirmed the signing of Samoa international Michael Ala'alatoa from the Crusaders in April.

McBryde says he's been pleased with how both players have adapted to the new positions, given how specialised propping has become.

"Andrew's had experience at loosehead previously, but it's a conversation that's been ongoing since I've arrived with regards looking at the depth of props, front row players from a national perspective, etcetera.

"You want your best players on the field at the same time. Everyone is aware of the battle that goes between Tadhg (Furlong) and Andrew on the tighthead.

"I suppose it's been a bit of fresh air for both of them, getting a new experience, trying to help certain, different ways of doing things," he said.

Dual props have become a rare species in the last decade since it became mandatory to have three front-row replacements on your bench.

There have been some exceptions however, with Connacht's Finlay Bealham capable of playing loosehead on occasion, while those watching the Lions series in South Africa would have seen how versatile Trevor Nyakane was, playing each side of the scrum in the opening two Tests of the series.

Leamy has been an elite player development officer at the province since 2019.#RTERugby #RTESport https://t.co/2xistaQsfe

McBryde is hopeful Porter and Healy can excel in a similar fashion, which he says will have benefits for Irish rugby as well as Leinster.

"From a national perspective, if they come through in terms of the World Cup, that has massive implications with the make-up of your World Cup squad, you haven't got to carry as many front row forwards possibly.

"We've seen Trevor Nyakane for the Springboks, he's proved to be worth his salt on both sides of the scrum as well. There aren't many people who are able to do it, but to date they have both embraced it really and they've gone well in the matches as well."

The Lions assistant also revealed that while the decision to switch Porter from tighthead to loose has been in the works for some time, Healy's transfer across the scrum was more recent, and one the 33-year-old sought out himself.

"It was more recent, in fact Cian put his hand up to give it a go, and I thought that was great.

"He's got the experience, he's got the strength, and you need that experience to keep yourself going. You're not going to get every scrum right, and when you do get a bad one, you need that mental toughness to get up, dust yourself off and get back into it without doing it too much.

"Cian is of that nature. It's been great to see him going well, I think he's won a penalty against the Bulls and Dragons, so it's just good to see him go."

Elsewhere, Jordan Larmour and Harry Byrne are both in line for their first appearances of the season this Saturday against Zebre.

Larmour hasn't featured since suffering a groin injury in Ireland's opening summer Test against Japan in July, while Byrne has been sidelines with a foot injury for the opening round of the season.

Tommy O'Brien is also available again, while Dan Leavy, Nick McCarthy and Conor O'Brien all came through their respective returns to action unscathed against the Dragons.

However, Rory O'Loughlin will miss this Saturday's game versus Zebre due to a shoulder injury.

The centre picked up the nock in Sunday's win against the Welsh side, and will have a scan to determine the extent of the damage. 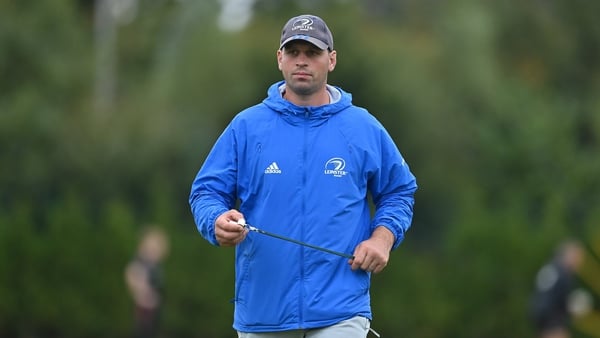