Novak Djokovic's father claims that the world number one has been made a scapegoat and been "crucified" in the row with Australian authorities over a Covid-19 medical exemption.

The Serbian is awaiting the outcome of an appeal against the decision by the Australian Border Force (ABF) to cancel the reigning Australian Open champion's entry visa and deport him.

With the appeal adjourned until 10am on Monday, Djokovic is being detained at the Park Hotel, a state-run quarantine facility in Melbourne which has also housed asylum seekers.

Djokovic has spoken in the past about his opposition to vaccination, and posted on social media before setting off for the Australian Open to say he had received "exemption permission" to enter the country.

The ABF, though, refused to let the 34-year-old in, saying he had failed to provide appropriate evidence to justify the exemption.

Serbian president Aleksandar Vucic claims Djokovic was the victim of "political persecution" by the Australian Prime Minister Scott Morrison and others in the country's government, calling on them to move him from the "horrific hotel" where he is being detained into a private rented house.

Back in Belgrade, Djokovic's father Srdjan demonstrated outside the National Assembly buildings and addressed a media conference to highlight what the Serbian's family and his supporters perceived to be an injustice Down Under.

"He met all the required conditions for the entry and participation at the tournament that he would have certainly won, since it's Novak, the best tennis player and sportsman in the world," Srdjan Djokovic told a press conference on Thursday.

"Jesus was crucified and endured many things, but is still alive among us. Novak is also crucified... He will endure."

Srdjan Djokovic had also said that his son was being singled out unfairly.

"Novak and his team filed the same documents as 25 other tennis players (who received exemptions) and they didn't have any problems, just Novak," Djokovic senior said in an interview broadcast by Sky News.

"He's not in detention, he's in prison. They took all of his stuff, even his wallet, they left him with just his phone and no change of clothes, nowhere to wash his face.

"Our pride is a prisoner of these idiots, shame on them, the whole free world together with Serbia should rise. This isn't a battle for Serbia and Novak, it's a battle for billions of people, for freedom of expression, for free speech, freedom of behaviour.

Australian Prime Minister Morrison even indicated that Djokovic's public statement about the exemption had drawn him to the attention of the ABF.

Home Affairs Minister Karen Andrews said on Channel 9 News: "A visa was granted for entry, but that does not guarantee entry.

"He (Djokovic), along with any other individual who is seeking to enter Australia, also has to meet the entry requirements which at this point includes medical evidence of vaccination or alternatively medical reasons why that individual cannot be vaccinated.

Andrews added the ABF was also now investigating other players who may have already entered the country using a similar medical exemption to which Djokovic had claimed on his visa.

"As people come into Australia, they need to have met our entry requirements as well as having a visa," she said.

"They stand the risk if they come in and don't have the proper documentation, that they will be stopped at the border and will go through exactly the same process which is being played out now." 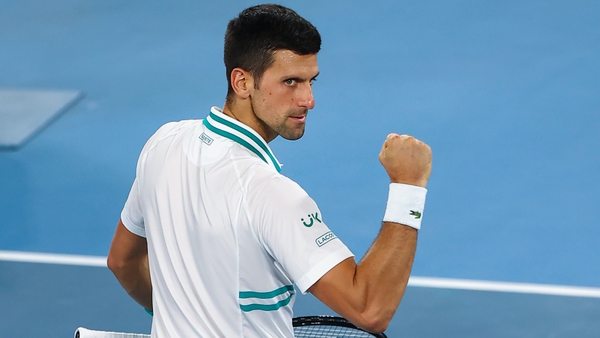 Novak Djokovic remains in Australia ahead of appeal against visa denial