Novak Djokovic has been given temporary permission to remain in Melbourne after the Federal Court of Australia adjourned an appeal against the decision to refuse him a visa until Monday.

The 34-year-old world number one had travelled in pursuit of a record 21st grand slam title after announcing he had received a medical exemption from Covid-19 vaccination rules to compete in the Australian Open, which begins on 17 January.

That, however, was not sufficient for border officials with regard to entry into a country that has strict entry requirements.

Djokovic was held for several hours at the airport after flying to Melbourne before ultimately being refused entry by the Australian Border Force.

"The ABF can confirm that Mr Djokovic failed to provide appropriate evidence to meet the entry requirements to Australia, and his visa has been subsequently cancelled," a statement said.

The nine-time Australian Open champion then legally challenged the ABF's decision and his appeal has been adjourned until 10am on Monday in Melbourne (11pm Sunday Irish time), court officials said. Djokovic was subsequently taken to a quarantine hotel in the city.

Organisers had insisted on Wednesday that Djokovic was one of "a handful" of successful applicants among 26 people who sought exemptions, but had not received any special treatment in the anonymous application process, which requested proof of a medical condition preventing vaccination or evidence of having contracted Covid within the last six months.

But news of the exemption provoked a huge public and political backlash yesterday in Australia, where 91% of the adult population are vaccinated, particularly in tournament host city of Melbourne, which has endured the world's longest cumulative lockdown to ward off the coronavirus.

Under Australia's federal system, states and territories can issue exemptions from vaccination requirements to enter their jurisdictions. However, the federal government controls international borders and can challenge such exemptions.

Djokovic travelled to Australia after receiving an exemption from vaccination from the Victorian government. That exemption - the reasons for which have not been disclosed - supported his federal government-issued visa.

On his arrival, however, Federal Border Force officials at the airport said Djokovic was unable to justify the grounds for his exemption. There was also reportedly an issue with the type of visa he had applied for.

The Australian task force that sets the exemption parameters lists the risk of serious cardiac illness from inoculation and a Covid-19 infection within the past six months as qualifiers. However, Australian Prime Minister Scott Morrison said on Thursday that Tennis Australia had been advised weeks ago that a recent infection did not meet the criteria for exemption.

Speaking after the decision to deny entry, Morrison said Djokovic did not have an exemption to visit the country.

In a press conference, Mr Morrison thanked Border Force officers "for doing their job implementing the Government's policies" and noted entry to Australia "requires double vaccination, or a medical exemption".

"I am advised that such an exemption was not in place, and as a result he is subject to the same rule as anyone else," Mr Morrison told reporters.

"I also want to stress, that ultimately, this is the responsibility of the traveller. It is for the traveller to be able to assert and backup their ability to come into the country consistent with our laws.

"This is nothing about any one individual, it is simply a matter of following the rules, and so those processes will take their course, over the next few hours, and that event will play out as it should."

An anonymous source close to Tennis Australia told the Sydney Morning Herald that the organisation was concerned the decision might have been political.

"Several tennis players are already in the country with the same exemption granted to Novak," the source said.

"This looks to us like the feds are responding to the media by letting some players in but not the World No 1."

Shortly before the ABF statement, Serbia's president Aleksandar Vucic had weighed into the controversy and criticised the way Djokovic had been treated.

Vucic wrote on Instagram: "I just finished a phone conversation with Novak Djokovic.

"I told our Novak that the whole of Serbia is with him, and that our authorities are taking all measures to stop the harassment of the best tennis player in the world in the shortest possible period.

"In accordance with all norms of international public law, Serbia will fight for Novak Djokovic, for justice and truth."

Fellow 20-time grand slam champion Rafa Nadal said he feels sorry for Djokovic but added that his rival had known for months that he could potentially face problems if he arrived without being vaccinated against Covid-19.

"Of course I don't like the situation that is happening," Nadal told reporters after winning his match at the Melbourne Summer Set ATP 250 tournament. "In some way I feel sorry for him.

"But at the same time, he knew the conditions months ago, so he makes his own decision."

"I have been vaccinated twice. If you do this, you don't have any problem to play here.

"The only clear thing is if you are vaccinated, you can play in the Australian Open and everywhere, and the world in my opinion has been suffering enough to not follow the rules.

"There are rules, and if you don't want to get the vaccine, then you can have some troubles. I think if he wanted, he would be playing here in Australia without a problem. 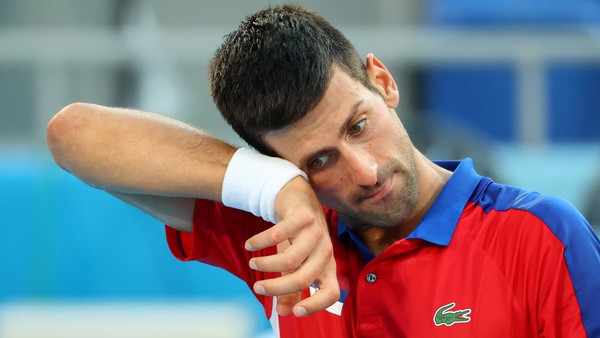 Novak Djokovic set to be deported from Australia over visa issue