Rafael Nadal has cast doubt on his participation at Wimbledon, saying he needs to see how his body recovers after a long clay court campaign culminated in an 11th French Open title.

Two of the Spaniard's 17 Grand Slam titles came on the All England Club's lawns, but the 32-year-old has struggled to make an impact there in recent years.

"Difficult for me to think about it now. I had a long and mentally tough clay court season, of course, because I played almost all the matches possible after coming from an injury. So it was a demanding two months for me," Nadal said after his 6-4 6-3 6-2 defeat of Dominic Thiem in Paris. 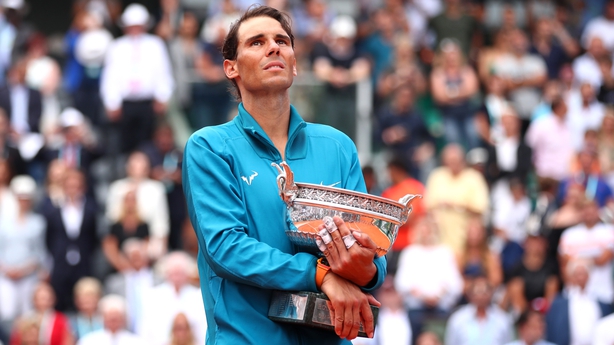 Nadal, who also won the titles in Monte Carlo, Barcelona and Rome this year, is entered for the Queen's Club warm-up tournament starting next week but says he will consult with his team, including coach Carlos Moya, over the next few days.

"I would love to be playing in as many places as possible, but you understand I need to check how I feel in the next couple of days," Nadal said.

"Of course it's a drastic change from clay to grass. I did it in the past when I was much younger, quicker, because I played back to back."

Twenty-times Grand Slam champion Roger Federer, the world number two, skipped the clay court season to concentrate on Wimbledon, where he will be going for a ninth title.

Nadal spent several months away from the tour after sustaining an injury at this years Australian Open and could, like Federer, decide that his long-term interests are best-served by sparing his body further punishment.

It is common knowledge that the lower-bouncing ball on grass puts extra strain on the knees that have bothered him at times throughout his career.

Yet Nadal also knows he could be a threat after playing impressively last year before falling in the last 16, losing a classic tussle against Luxembourg's Gilles Muller.

"Last year I felt that I had a good opportunity to go far in the tournament. I felt myself playing well on grass last year," the Spaniard said.