Marin Cilic stands one win away from a first Wimbledon title after powering past Sam Querrey to book his place in the final.

Querrey had knocked out the limping Andy Murray in the previous round on Centre Court but another shock proved beyond the American as Cilic prevailed 6-7 (6/8) 6-4 7-6 (7/3) 7-5.

It was less of a routine victory than the score suggests. Querrey snatched the first set and very nearly took it to a fifth only for Cilic to break at the crucial moment to seal victory after two hours and 56 minutes.

Cilic is the first Croatian to go the distance at Wimbledon since Goran Ivanisevic beat Tim Henman to reach the Wimbledon final in 2001. He will await the winner of Roger Federer and Tomas Berdych, who contest Friday's second semi-final.

When you reach the #Wimbledon final... pic.twitter.com/yoqQM7ojDY

After converting his second match point, Cilic turned to his box, roared with delight and wheeled his arms in celebration.

"Especially the way this tournament has unfolded. From the first round I have been playing great tennis.#

"Today was a hard-fought battle, Sam played hard tennis especially in the first set, serving big and hitting big from the back .

"After that I felt I was a bit better on the return games and made him play more on his service games. Overall I felt the level was really high."

It is three years since Cilic won his single major title at the US Open but he was a dark horse from the start at SW19 and will be a formidable opponent on Sunday. 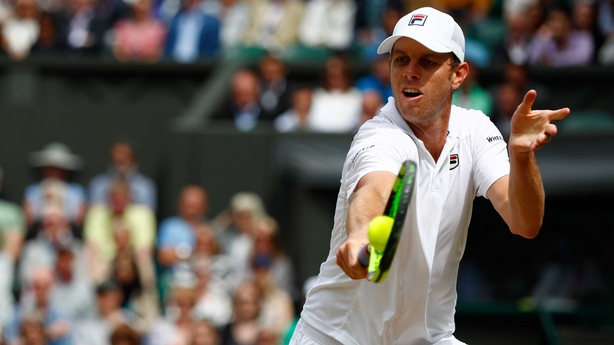 Many had predicted an attritional battle of two power-servers but, while baseline exchanges were few and far between, Cilic and Querrey showed enough touch and subtlety to keep the crowd entertained.

Rod Laver, David Attenborough and Sachin Tendulkar were among those watching on from the Royal Box.

There were no break points in the opening set but Cilic stormed 4-1 clear in the tie-break, winning a mini-break with a cross-court backhand winner.

Querrey, however, took five of the next seven points to tie at 6-6 and it was then that Cilic, waiting to deliver a second serve, was delayed while a stricken spectator required assistance.

When play resumed after a delay of around four minutes, Cilic flashed two backhands wide and Querrey had sneaked the set.

Cilic came again in the second, however, and while he missed one break point at 2-2 he took his chance two games later with a punching backhand pass. He served out to love to level up at one-set all.

The momentum seemed now to be with Cilic and while Querrey held on for another tie-break, two glaring errors from the back saw his opponent move two sets to one up. Querrey hurled the ball in frustration.

Again on the brink, again Querrey struck back with an unexpected break early in the fourth but Cilic levelled up with a booming forehand for 4-4.

A third tie-break beckoned but Querrey blinked at 5-6 when a double-fault allowed Cilic a sniff. He missed one match point but converted the second, a blistering forehand down the line sealing a long-awaited spot in the final.