Serena Williams is not worried by the arduous schedule she faces if she is to successfully defend her French Open title.

The world number one was unable to take to the court on Monday or Tuesday because of rain and must now potentially play four matches in four days.

Williams said: "When we play regular tournaments you play four, five matches in a row. It's something you just get used to. It's totally fine I think for me and for everyone."

If they are all as straightforward as her 6-1 6-1 victory over Elina Svitolina in the fourth round, then it certainly will not be any problem at all.

Williams needed just 62 minutes to see off the Ukrainian, who is coached on a part-time basis by a former French Open nemesis of Williams, Justine Henin.

But Svitolina does not possess the same finesse as Henin and could find no answer to the power of her opponent.

The forecast indicates there could be more disruption from the weather over the next two or three days, and Williams said she would draw the line at playing two matches in one day.

"I have done that once before, actually," she said. "Charleston I think I played like the 1pm and the 7pm match. It was crazy.

"No, I don't think they would do that, though, here. This is a grand slam, and I think we would have to find a different solution."

The players in the bottom half of the draw certainly have an advantage and were able to play their quarter-finals on Wednesday.

Fourth seed Garbine Muguruza reached her first semi-final at Roland Garros having gone out in the last eight the past two years with a 7-5 6-3 win over 108th-ranked American Shelby Rogers.

Rogers' run has been one of the stories of the tournament and she was eyeing another scalp when she served for the opening set.

But a set point went begging and from there it rather unravelled as Muguruza claimed victory.

The Spaniard reached her first slam final at Wimbledon last year, losing to Williams, and she said: "I'm calmer. There is always a little bit of stress.

"But I have already experienced that situation at Wimbledon, so you see things differently and you know what you have to do, what you should avoid doing. It's better to have lived this experience."

Putintseva took on the American in Indian Wells this year and forced a tie-break in the opening set before being overwhelmed in the second.

The 21-year-old said: "Of course she's the best player. She's a legend. I'm just going to go there and show my game, show my best, and we'll see what's going to happen. I have nothing to lose obviously against her."

Williams has yet to drop a set on clay this season, but a woman in almost as good form is Kiki Bertens, who added 15th seed Madison Keys to her list of scalps.

Bertens won the title in Nuremberg the week before Roland Garros as a qualifier and has won 11 straight matches.

Both Simona Halep and Eugenie Bouchard followed up winning the title in Nuremberg with long runs in Paris in the last few years, and Dutchwoman Bertens said with a smile: "Maybe there is something in the food there. I have no idea.

"I felt good there that week. I'm coming here with a lot of confidence. I'm still playing here. It's just amazing for me."

Bacsinszky's run to the semi-finals 12 months ago was a big surprise but that is not the case this year.

Venus, meanwhile, had sympathy for Halep and Agnieszka Radwanska, who both suffered upsets on Tuesday and were furious at having been made to play in the rain.

"I think the conditions were not playable yesterday," said Venus.

"It was really bad. It's hard to see. The balls are wet, the courts are wet. I wasn't out there the whole time that some of the matches were on, but it just seemed terrible.

"It should be fair. Some players shouldn't have to play in that weather and others not." 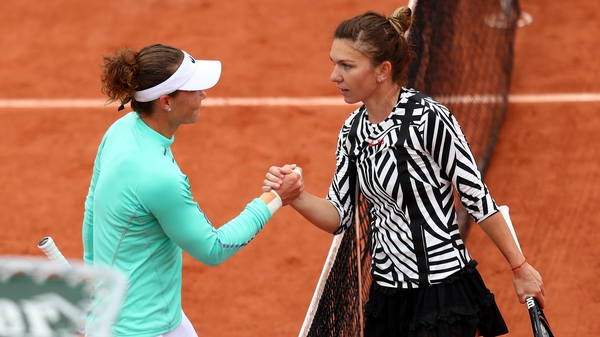 Agnieszka Radwanska and Simona Halep crash out of French Open