James McGee had never cried with happiness in his life until the glorious moment on Friday when he qualified for the US Open.

There had been plenty of tears of frustration and no little despair on the winding road to Flushing Meadows.

The 27-year-old Dubliner has spent his whole career until now on the lowest rungs of professional tennis, the Futures and Challenger circuits, where prize money is measly and glamour non-existent.

Now he is at tennis' top table and finds himself next to Andy Murray in the locker room.

Later today, he will play Kazakh Aleksandr Nedovyesov, ranked 107 in the first round on court 13.

Play begins at 4pm Irish time with McGee's game third on the schedule.

A year ago he was playing in Gabon. It was a good week for McGee, who won the tournament, but there was a nasty sting in the tail.

"I remember after the match lifting up the trophy and I was shaking hands with all the ball boys and the officials and fans," said McGee, who is ranked 194th.

"After the match they were handing me finger food and I hadn't washed my hands. I'd probably shaken 200 hands and I must have had some sort of bacteria on my hand.

"The next morning I couldn't get up out of bed. I was vomiting and all the rest, all the worst things you could possibly imagine. I was stuck in bed for two days.

"I ended up pulling out of the next week's tournament, flying back to Ireland, getting all sorts of tests done, going to tropical disease centres and everything and found out after a good few weeks that I had some sort of a parasite inside me.

"Now a year later here I am playing main draw of the US Open. It's two different worlds."

"Just seeing the ball go past him, there was a variety of feelings, of shock, disbelief and happiness" - James McGee

McGee won $2,160 in prize money for his exploits, which was more than cancelled out by the time he lost to the illness.

For winning his three qualifying matches in New York, he is guaranteed $35,750 - a quarter of everything he has earned in his career before.

It was perhaps fitting that such a momentous moment for McGee turned out to be full of drama.

He lost the first set of his final-round qualifier against China's Zhang Ze to love in just 23 minutes but fought back and was on the brink of victory at 5-2 up in the decider.

New York's love of an Irishman ensured him great support and there was not a vantage point to be had as he stepped out to serve for the match.

But Zhang retrieved one of the breaks, then held serve to make it 5-4. McGee was wracked by cramp and struggling to move.

He got to 40-0 but still it was not over as Zhang won the next three points and then saved another match point.

McGee's serve was his only hope and it saved him in his hour of need, with one ace and then a second finally clinching victory.

"Just seeing the ball go past him, there was a variety of feelings, of shock, disbelief and happiness," said McGee.

"I remember falling to the ground, running up to my opponent to shake his hand as I didn't want to leave him there waiting and just immediately bursting into tears.

"I've never burst into tears for happiness in my entire life. I sat on my chair and I started crying like a big baby.

"I remember the feeling, I was releasing a lot of pent-up emotion of years of hard work and frustration and sacrifice. It was just the most amazing experience. I've felt very light the past few days, I feel like there's a big weight lifted off my shoulders."

McGee has had to mostly fund himself and is only able to pay his coach to travel with him for a few weeks a year.

His home club, Castleknock, supported him as much as they could and McGee has been proactive in seeking sponsorship.

Self-belief is all he has had to sustain him at times, but holding onto the feeling that better days lie ahead has not always been easy.

"There were times I doubted it, especially on the Futures circuit," he said. "I feel you get conditioned not to break through because it's very, very difficult, especially if you're doing it alone.

"When you're doing everything yourself and dealing with your losses alone it's very difficult to stay upbeat. I have had very dark moments.

"I never thought of quitting but there was a stage where I wasn't sure how far I could go. I've broken through that and Friday's match really was the event that broke the barrier for me in my own mind. It's a huge occasion in my life."

McGee rewarded himself by moving out of his budget apartment and into a boutique hotel in Manhattan, and his parents, sister and many friends are flying over to support him in his first-round match against Nedovyesov.

"That's a true dream," he said. "I'd visualised it in my own head years ago, seeing my parents watch me at the US Open. To have it manifest into reality is just an amazing thing.

"I'm going to give it absolutely everything I have and hopefully I can get the win. I want to achieve more. Finally getting onto the main tour, I'm getting a taste of it and it tastes really good." 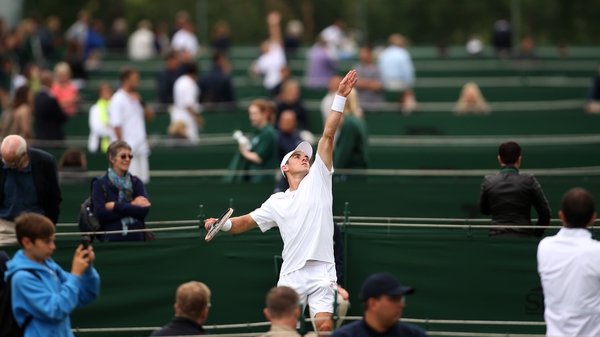 James McGee: Pressure is off after US Open qualification