An emotional Serena Williams broke down in tears on the Centre Court this afternoon after completing a comeback from what she describes as a near-death experience with a Wimbledon final win over Agnieszka Radwanska.

The American was unable to stop her voice from breaking as she addressed the crowd after securing her 14th grand slam title, which was also her first since she won at the All England Club two years ago.

A week after that success she injured her foot when she stepped on some glass in Munich, with the injury itself and subsequent complications keeping her out for the best part of a year.

She has since revealed that she nearly died owing to a undetected blood clot caused by the injury spreading to her lungs and, after she saw off Radwanska 6-1 5-7 6-2, two years' worth of emotions came flooding out.

She clambered into the players' box to celebrate with her family, and then said: "I can't describe it. I almost didn't make it when I was in that hospital, but here I am again and it's so worth it.

"I never dreamed of being here when I was so down but I never gave up."

Williams then turned to her family and friends, in particular dad Richard, mum Oracene, sister Venus and physiotherapist Esther Lee, and said: "I thank you from the bottom of my heart.

"I could never have done this without you when you were with me in the hospital. Thank you so much."

While Williams shed tears after winning her fifth Wimbledon, Radwanska - on her grand slam final debut - was also emotional.

She was a doubt to play today owing to a respiratory problem and was hit off the court in the first and third sets, her serve being broken twice in each.

She saved face with a courageous second set, and said: "I have had the best two weeks of my life. Playing in the wind and rain has not helped me, but I was playing my best." 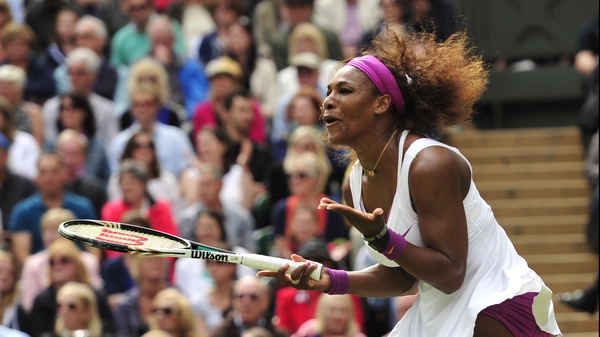