An emotional Serena Williams broke down in tears on the Centre Court this afternoon after completing a comeback from what she describes as a near-death experience with a Wimbledon final win over Agnieszka Radwanska.

The American was unable to stop her voice from breaking as she addressed the crowd after securing her 14th grand slam title, which was also her first since she won at the All England Club two years ago.

A week after that success she injured her foot when she stepped on some glass in Munich, with the injury itself and subsequent complications keeping her out for the best part of a year.

She has since revealed that she nearly died owing to a undetected blood clot caused by the injury spreading to her lungs and, after she saw off Radwanska 6-1 5-7 6-2, two years' worth of emotions came flooding out.

She clambered into the players' box to celebrate with her family, and then said: "I can't describe it. I almost didn't make it when I was in that hospital, but here I am again and it's so worth it.

"I never dreamed of being here when I was so down but I never gave up."

Williams then turned to her family and friends, in particular dad Richard, mum Oracene, sister Venus and physiotherapist Esther Lee, and said: "I thank you from the bottom of my heart.

"I could never have done this without you when you were with me in the hospital. Thank you so much."

While Williams shed tears after winning her fifth Wimbledon, Radwanska - on her grand slam final debut - was also emotional.

She was a doubt to play today owing to a respiratory problem and was hit off the court in the first and third sets, her serve being broken twice in each.

She saved face with a courageous second set, and said: "I have had the best two weeks of my life. Playing in the wind and rain has not helped me, but I was playing my best."

After Radwanska's admission about her illness, Williams' early tactic appeared to be to try to work her opponent as hard as possible, often hitting wide to the backhand to have her scrambling and drain her resources.

The move paid off in the shape of a second-game break which came at the third attempt when she forced an already weary-looking Radwanska to fire wide.

The break was cemented with a pinpoint drop shot before she took Radwanska's serve for a second time, albeit through her opponent's fault rather than her own good work with a tame second serve being eaten up.

A 6-0 scoreline was on the cards when Radwanska fell behind at 15-40. She served her way out of danger, but got nowhere near Williams' delivery in the next game as she lost the set.

The players left court quickly after that for a 25-minute rain delay, and Radwanska returned a different player after it.

Initially she was broken in the third game, offering up two break points after a pair of tame second serves were turned into winners, but in the sixth she offered hope of a recovery, taking two points off a previously untouchable serve with two cute shots.

A break duly followed in the eighth, although she had good fortune on her side in securing it.

Williams, serving at break point, had to re-play an unreturned serve after it was called out when replays showed it was a foot in. Radwanska made the most of the let-off, dominating a rally that resulted in Williams netting.

That had the battle-thirsty crowd on their feet and Williams was rattled, letting out a groan as a Radwanska forehand ripped past her and again when she netted from close range at 30-30 on the Pole's serve.

Radwanska had momentum and the support on her side and, after a routine hold to 6-5 she broke for a second time in the set when Williams netted at 15-40.

The match was level. Williams was still getting chances but, unlike in the first half of the match she was struggling to take them, with her break-point conversion rate stretching out to three from 10 over the first three games of the decider.

She spurned one in the first game and two more in the third, giving up on two shots from Radwanska that she had earlier been covering with ease.

But she fired herself back up with a perfect service game, winning it to love in 49 seconds with four aces that took her tournament tally into three figures, before finally taking a break point when Radwanska went long with a backhand.

She fashioned four more break points the next time Radwanska had ball in hand too, taking the last of them when she bravely played a drop shot into the wind.

A raised fist to her family suggested she knew the end was nigh and, after serving it out to 15, Williams embarked on a Pat Cash-style climb into the stands to celebrate with them. 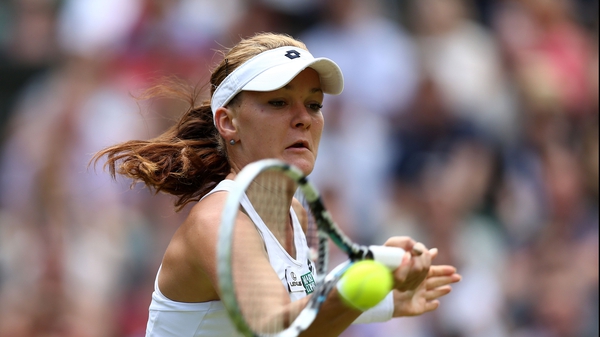 Radwanska to contest final despite illness