Stephen Kenny was left searching for positives from another below-par performance as Ireland edged past Malta in their final outing of the year.

Callum Robinson's 55th-minute goal proved the difference between the two sides in the lacklustre international friendly, and the winning goal came courtesy of a Malta mistake rather than a creative move from Kenny’s side.

Over one hundred places separate the two sides in the current FIFA rankings - Malta are 168th in the world - although there was little evidence of the gulf throughout the game at the National Stadium in Ta’Qali.

Ireland really struggled to break through the stubborn home defence in a dour opening 45 minutes, and when they did manage to sneak ahead, following a calamitous under-hit backpass from captain Matthew Guillaumier, Kenny’s charges failed to push on to record a convincing victory.

There were glimpses of quality from the substitutes who came on for the final stages, most notably the energetic and pacey Callum O’Dowda smashing a fine effort off the post, but otherwise little to write home about in what has been a tough week for the national side, following Thursday’s 2-1 defeat to Norway.

The manager said afterwards that the game was one that his side were expected to win, while admitting that it was far from a classic.

However, Kenny was also keen to pick the positives from the game following a challenging few months for his side, following defeats to Scotland in Glasgow as well as the recent Norway game.

"The expectation is that you should be beating Malta whether you play them at home or away," said Kenny, speaking to RTÉ Sport after the game. "But every game away from home in international football is not easy. Malta have won five of their last eight at home, so they’ve done alright.

"It wasn’t a classic, and we know there is room for improvement, but in the last couple of games, losing 2-1 to Norway and 2-1 to Scotland, it was important to keep a clean sheet, so we were pleased we did that.

"Tonight was a different game (compared to the Norway match). Difficult to break down, Malta, three big centre-halves, they dealt with crosses well."

Kenny also spoke about the need for competition for places ahead of the upcoming Euro 2024 qualifying campaign. And the manager was delighted to see Jamie McGrath come back into the reckoning after enduring a difficult time at Wigan Athletic, and since rediscovering his form on loan at Dundee United.

"Pluses for us," said Kenny. "Jamie McGrath coming in and doing really well. It was an excellent performance for him, because he is in the wilderness with his club situation, it didn’t work out in England and he found himself not playing, so it was great for him to come back and do so well.

"Callum O’Dowda giving us that burst in the last half hour, and we would have liked his shot to go in, it was a brilliant run from him, and I think he would have deserved that for his performances over the two games.

"The back three, goalkeeper and Josh Cullen in front making sure we kept a clean sheet, which was a positive, and we didn’t conceded many chances.

"Callum getting his eighth international goal, while Chiedozie is learning how to play against deep defences, as he works best in space, because he is electric. So these are things that we can take."

Looking ahead to the first game of the qualifying stages, where Ireland welcome France to Dublin in March, the manager would not be drawn on his preferred starting XI, noting that a lot would depend on the fitness and form of players at their clubs.

But Kenny, now 30 games into his tenure as Ireland manager, believes that there is a lot more depth to his squad ahead of the vital campaign.

"One of the things we learned from the game against Norway, Callum (Robinson) and Michael (Obafemi) playing together, they are better as split strikers than twin strikers," said Kenny.

"It's probably better with Callum playing deeper and Michael threatening the last line as a central striker all of the time. We tried it more in the second half of the game and it worked better.

"Chiedozie excels in space, he’s been a right-winger most of his career. Exploiting space is key, he’s learning about playing against a low block himself as a forward. It requires different attributes.

"He gave it everything, he gave 100 per cent and he’s been brilliant for us since he came in.

"We have competition for places now at centre-back, Darragh Lenihan didn’t start and he has been having a great season at Middlesbrough, and we’ve Andrew Omobamidele and Shane Duffy.

"I feel we have more competition in midfield, we’re getting there, and Jason Knight wasn’t here as well, and some of the forwards weren’t here.

"But we can’t be certain who will be available in March and that is the nature of international football, so we need to have cover in all areas, and I feel that we have more depth to the squad than we had." 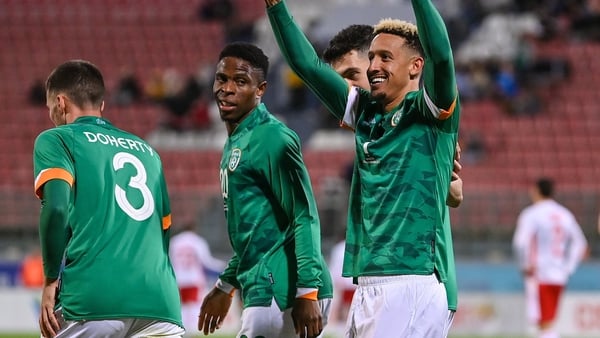