Ireland ended the year with a fortuitous victory in Ta'Qali, as Stephen Kenny’s side edged past Malta 1-0 at the National Stadium.

Scoreless at the break, Ireland eventually took the lead thanks to a stroke of real luck as Callum Robinson raced onto a very poor backpass to break the deadlock.

Another underwhelming performance from the national side following Thursday’s defeat to Norway in Dublin, with the result the only real positive for the team to take into the start of the Euro 2024 qualifying campaign that begins in March.

It was a good start from the home side, working the ball down the right channel after three minutes, before Jodi Jones turned Nathan Collins very easily in the box. However, his clipped ball across the face of goal was cleared.

A similar chance for Ireland a minute later as Chiedozie Ogbene raced up the right flank before cutting inside and into the box. A moment of indecision showed his intentions as he looked for Robinson inside, and Malta dealt with the situation.

Ireland enjoyed a spell of pressure with Robinson and James McClean maintaining the momentum, however, a corner was all that could be conjured with nothing resulting from the set-piece.

Then in the 12th minute, Malta raced up the pitch and suddenly found themselves in a three-on-two situation, as Ireland were exposed at the back when Coleman misjudged the flight of the long ball out of defence.

Jones, arriving from the right, was eventually played in on goal and while he had options back inside, the Oxford United forward opted to shoot. His tame effort was easily dealt with by Caoimhin Kelleher.

In the 23rd minute, Ireland finally found a way to play through the blanket defence, as Collins stepped forward, before sliding a fine pass into the feet of Robinson, who turned towards goal and clipped a clever ball to the arriving Ogbene. Great defending was required from centre-half Enrico Pepe who slid back across the path to make a vital interception.

Two half-chances within a minute followed for Kenny's side as first Alan Browne looked to replicate his strike from midweek, before Jamie McGrath made space to shoot, however, both efforts flew high and wide.

Malta were offering little in attack at this point of the non-event, however, Ireland were struggling to make any inroads, with a clipped Coleman ball to the advanced Doherty the most creative moment in a good matter of minutes, but the Spurs man mis-judged the bounce as the ball skipped out of play.

The ennui continued as half-time approached with Ireland now dragged right down to the level of their opponents, offering little in attack with no one to blame but the collective for not having the nous or knowhow to break down a clearly inferior outfit.

Ireland could have snuck one just before the break as Browne was played in on goal by a smart Doherty flicked pass. The ball helped past the keeper, however, it also slipped wide of the post.

No changes at the break as Kenny sent the same eleven back out to change the game, but it was Malta with the first break forward, as Collins had to take one for the team to chop down Jones outside the box.

Captain Matthew Guillaumier took on the free-kick duties, but his curling effort cannoned off the wall and away. 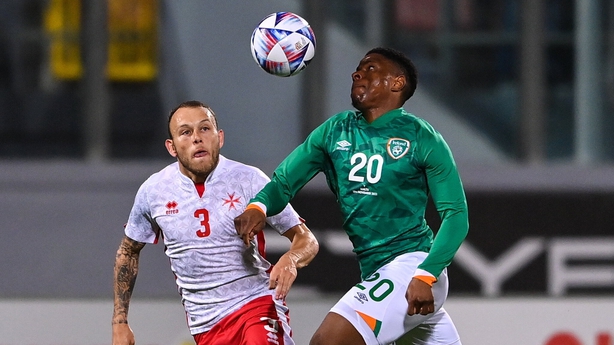 Josh Cullen then offered Ireland a similar opportunity as he was fouled on the edge of the box following good play from Jamie McGrath and Doherty. McGrath hit the free and followed by example, crashing the ball off the wall.

Ireland took the lead in the unlikeliest fashion in the 55th minute, as Guillaumier, under no pressure, rolled the ball back to his keeper, but it was lacking the pace to reach Henry Bonello, allowing Robinson to race onto the ball, take it past the stranded stopper and roll it home into the empty net.

Malta looked to respond straight away and called for a penalty as McClean handled inside the area, however, the appeals were waved away as the Derry man could do little about the contact.

Browne's headed effort worked the keeper in the 61st minute as he connected with a free in from the right, however, it would have needed something special to beat Bonello from the edge of the box and the keeper duly gathered.

Ireland made two changes five minutes later as Callum O'Dowda and Jeff Hendrick were sent on, but it was the home side who took the initiative as Joseph Mbong burst forward before playing Steve Pisani in on the edge of the area. The substitute managed to get a decent shot on target, making Kelleher work, getting down well to his left to make the save.

Evan Ferguson came on for his second cap for the final fifteen as Ireland looked to at least finish with a flourish following a drab first 75 minutes.

Then Robinson picked up another loose ball inside the Malta half and tried to catch the advanced keeper out, however, the backpeddling Bonello read his intentions to gather without difficulty.

With eight minutes remaining, O’Dowda showed a bit of pace and precision up the left flank, linking well with McGrath, and while the corner kick was gained, the chance was ultimately lost as Malta dealt with the ball into the box.

Mark Sykes was sent on to make his international debut with five minutes remaining, replacing Robinson, and it was fellow substitute O’Dowda who came close to doubling Ireland’s lead two minutes later.

O’Dowda again ran with intent at the Malta rearguard and managed to get his shot away while under pressure from the retreating Mbong, and the Cardiff City man did everything right to smash his effort across the face of the goal, but the ball crashed off the far post and away to safety.

Time was all but over as the substitutes again looked to make a difference as Sykes was sent clear down the right, before firing across to the arriving Ferguson.

The teenager took a touch before looking to get his shot away, but it was charged down and cleared as the game moved into injury time.

Little of note for the three added minutes as Malta showed some urgency that was lacking throughout, however, while the final whistle signalled the end of the game, it will surely ask more questions of the national team heading into the vital Euro 2024 qualifying campaign. 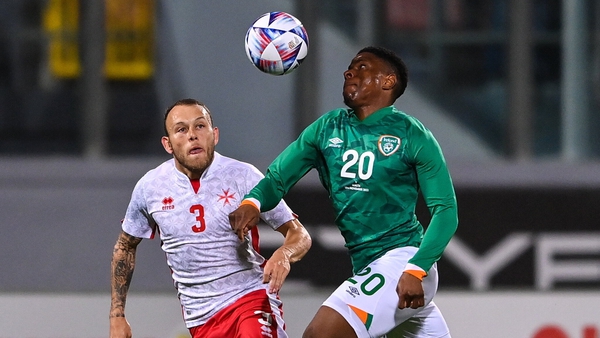