Stephen Kenny stressed the importance of hitting the ground running when the Euro 2024 campaign kicks off, however, if his side start with a performance akin to the 2-1 defeat to Norway, qualification for Germany may prove an uphill task.

A below-par performance from Ireland at the Aviva Stadium, most notably in the first half where Kenny's side failed to register a single attempt on target, resulted in a defeat to a Norwegian side who came to Dublin without star striker Erling Haaland.

Ireland enjoyed plenty of possession in the opening period, but lacked imagination as they invariably ended up attempting to attack down the left flank, with little success from Callum O'Dowda’s hopeful balls into the box, nor from several set-piece opportunities inside the first '45.

Norway, in complete contrast, proved very solid in defence, before moving forward with real pace and intention, causing Ireland several problems in and around the penalty area.

A deserved lead for the visitors in the 41st minute; the breakthrough coming from a set-piece rather than from one of their impressive forays forward, and it was a disappointing way for Ireland to head into the break, losing 1-0.

An energetic Ireland appeared for the second half and Kenny’s side worked tirelessly, putting pressure on the Norway rearguard with Callum Robinson finally showing some good link-up play in the final third that helped create some chances on goal.

Ireland’s equaliser, to the manager’s credit, arrived courtesy of the tactics to attack the flanks, as O’Dowda raced down the left and sent a testing ball into the box. The headed clearance fell to Alan Browne 30 yards from goal and it was a sublime strike on the half-volley that flew past Norwegian stopper, Orjan Nyland.

Norway had already began to make their obligatory friendly international changes before Ireland grabbed that equaliser, while they continued to disrupt the flow of the game with several more substitutions as the game progressed.

A draw looking the likely outcome until a standard set-piece delivery into the box was not dealt with by an off-balance Nathan Collins - there was a slight push on the defender - before substitute Ohi Omoijuanfo slammed the ball home to secure the victory.

In the end, Ireland were perhaps unlucky to lose this non-World Cup clash between two sides with aspirations to join the top table at the 2024 tournament, however, the defeat will shine a brighter spotlight on the failing of the Irish performance, and the noticeable lack of creativity.

"I don’t think we deserved to lose, I think it was a pretty even game," said Kenny, speaking at the post match press conference. "We struggled to create any chances in the first half and that was disappointing.

"The space is on the outside and we couldn’t penetrate in the first half and we needed to address that in the second half. We did that and Matt Dohety and Callum O’Dowda had a lot of joy, and we created three or four good chances before we scored, and Alan Browne got a great goal.

Ireland conceded the two goals from two set-pieces and it irked the manager to lose by such matters, considering they fully expected the aerial threat, and had planned for the power of Napoli centre-half Leo Ostigard.

And the manager was most upset to give away the winner in the area where his side had a surplus of numbers as the Martin Odegaard inswinging free-kick was sent into the box.

"We knew Ostigard was exceptional in the air, every game, we have seen it for Napoli. We know what he does, he was too powerful for us in that area and that wasn’t good enough," said Kenny.

"For the second goal we have six against three in the zone from a wide free-kick. Nathan has headed it against the player and he has scored, so that was a bad goal to concede."

Kenny was asked whether conceding from set-pieces was an issue having being down a member of coaching staff since John Eustace departed the backroom team. The manager was asked whether Eustace and Anthony Barry before him had responsibility for set-piece coaching, however, he stressed that he was personally responsible.

"That's not true at all," said Kenny. "I’ve always been in complete control of defending set pieces, and attacking set pieces, we have scored three of the last four, John Eustace had nothing to do with any of that."

As for the Euro 2024 campaign, Kenny said that he expects the opening game at home to France to be a completely different tactical affair compared to the Norway game.

And Kenny dismissed the notion that his side lacked the ability to play the fast-paced, incisive, attacking football that Norway displayed throughout the 90 minutes in the Lansdowne Road encounter, while also taking umbridge with the suggestion that his side's chances were more a result of intensity rather than creativity.

"It is a completely different game, tactically, in March," said Kenny. "And we did a lot of things well tonight."

"I completely disagree," he added, when asked about the comparison with Norway. "I wasn’t happy with the fact we didn’t create chances in the first half. We had a lot of possession but we couldn’t play through Norway, they are difficult to play through.

"It was the first time the front two have played together, Callum Robinson and Michael Obafemi, and we did better in the second half as a front two with the penetrating runs that they made.

"There was a lot of good play in that second half to create the chances. The reason we came down the wide areas is that is where the space is and we had to exploit it." 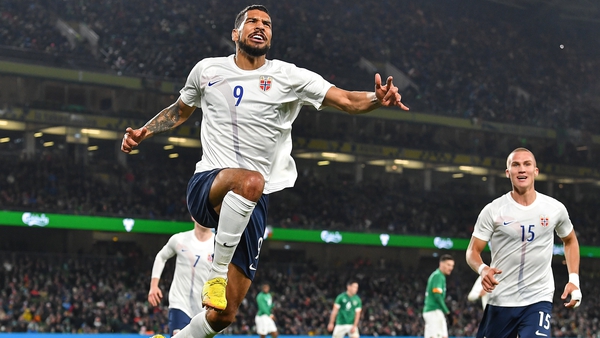