Ireland's final home game of the year ended in a disappointing defeat as Norway beat Stephen Kenny's side 2-1 in tonight's international friendly fixture at the Aviva Stadium.

A below-par first 45 minutes from Ireland led to the visitors taking a well-deserved lead at the break thanks to Leo Ostigard's 41st-minute header.

Lively from the start of the second half, Ireland's pressure and persistent play caused Norway's defence plenty of problems before an Alan Browne wonderstrike levelled the game in the 69th minute.

But it was Norway who managed to win it in the closing stages as substitute Ohi Omoijuanfo grabbed an 85th-minute winner to secure the victory.

The game started with two and a half minutes of keep ball, a spell ended with a hoof upfield. Ireland did manage to get back in possession, however, and space opened for Callum Robinson to have a look at the target.

The shot at goal was high and wide though, and a minute later it was Norway who worked the ball up into the Ireland final third in a lot less time, and it was much more incisive play from the front unit with an intricate move almost opening up a chance in the penalty box.

A Mohamed Elyounoussi shot from outside the area was the best they could manage in the end, and like Robinson's effort, it sailed deep into the seated area behind the goal.

For all Ireland’s possession, they rarely created, with a pattern of play emerging, as almost everything was worked down the left flank.

Callum O’Dowda crosses into the box appeared to be the desired route in the creative stakes, but with no return as the first half reached the midway stage.

Norway were happy to sit in, playing the role of the away team, but when they did move forward, they attacked with real intent and looked impressive.

Jorgen Larsen finding space on the edge of the box to shoot; this time a little closer as the ball flew just over, while Gavin Bazunu looked to have covered his angles correctly.

A deep O’Dowda cross in the 25th minute appeared more dangerous with Matt Doherty arriving at the back stick, however, Ireland again wasted the subsequent set-piece; the Norway goal still untroubled.

Jayson Molumby was lucky to get away with a studs-up challenge on Larsen two minutes later, and Martin Odegaard’s dipping free into the box caused Bazunu problems as he came out to meet the ball, eventually cannoning off his chest and away to safety.

Norway were growing in confidence as they remained in an advanced position with Ola Sobbakken happy to run at the Ireland defence and into the penalty area. Molumby did well to cover that particular advance with a much cleaner tackle to avert the danger.

The best chance of the game arrived in the 34th minute as Robinson was disposed in midfield as he attempted to dance his way around a couple of white shirts, before Patrick Berg slipped a perfect ball through to Elyounoussi bursting in off the left.

The Southampton man could and should have smashed a goal-bound effort, but continued to cut inside, looking for a better angle until he was eventually crowded out as Ireland cleared the dangerous situation.

A warning shot of the danger that this Norway side possessed, in stark contrast to the home side, as they consistently worked clever balls through the middle of the pitch.

A frustrating first half for Ireland summed up by O’Dowda dragging his man back to prevent a counter, and while the referee was generous by leaving it with a quiet word, the yellow card should have been shown for the player’s petulance.

Norway worked another chance from the free-kick with Elyounoussi’s shot from close range stopped en route to goal thanks to a vital Dara O’Shea clearance.

But moments later the visitors were rightly rewarded with the opening goal of the game from the resulting corner, as Leo Ostigard timed his run from just inside the box to perfection, losing John Egan along the way, before heading home from eight yards out.

And so ended the opening half as that 41st-minute goal proved the difference between the two sides; Stephen Kenny’s side unable to test the Norway goalkeeper throughout a disappointing half of international football.

A bright start from the boys in green to open the second half and four minutes in, a free-kick was won ten yards outside the box. Robinson's stinging effort was deflected wide by Solbakkan who was doing his job in the Norway wall. 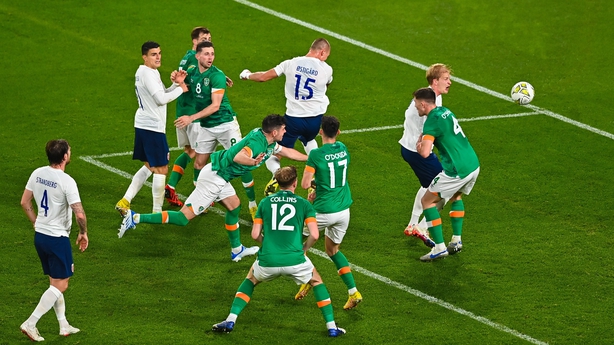 The corner half-cleared, Robinson did well to lift a clever ball across the face, and while Fredrik Bjorkan fluffed his lines, the unmarked Egan was caught off-guard and his late flick at the ball sent it just past the post.

In the 53rd minute, Ireland were almost level as Morten Thorsby came close to helping the ball into his own net, stretching to clear Michael Obafemi’s smart ball across the face of the goal.

Then a minute later, Alan Browne’s shot from close range was brilliantly blocked by the keeper who stood tall following Molumby’s looping header back into the danger zone.

Norway finally woke up and got involved in the second half as Sobbakken was worked into the box following two nifty passing moves in the 57th minute, and his curling effort had to be batted away by a diving Bazunu.

Moments later, the keeper again won the battle with the big Bodo/Glimt front man as he raced off his line to smother the ball at the advancing Sobbakken’s feet.

Ireland’s first real passage of creative play arrived in the 61st minute as Cullen found space outside the box and spotted O’Dowda racing in from the left.

A clipped ball was sent right into the path of the Cardiff City man, and while the downward header had the required power and accuracy, Orjan Nyland got down well at his front post to save.

Lacking in the creativity stakes, it would take a moment of magic for Ireland to restore parity, and it was a delightful effort from Browne who latched onto a decent headed clearance, taking a touch and smashing a daisy-cutter from 30 yards into the bottom corner.

A deserving return from a much-changed Ireland outfit compared to the first period with their disruptive style paying dividends having come close on several occasions.

Republic of Ireland 1-1 Norway - Alan Browne equalises for Ireland with a fabulous finish from outside the area. #IRLNOR

But then the game stalled a while as more replacements interrupted the fading contest, and by the 85th minute, Norway had changed half of their outfield players.

But then the game burst back into life, and it was substitute Ohi Omoijuanfo who pounced on a poor Nathan Collins clearance to smash the ball past Bazunu.

Evan Ferguson was sent on for the final six minutes of play to make his senior debut, tasked with saving Ireland’s blushes, however, little would come the way of the Brighton teenager as Norway saw out the four minutes of added time. 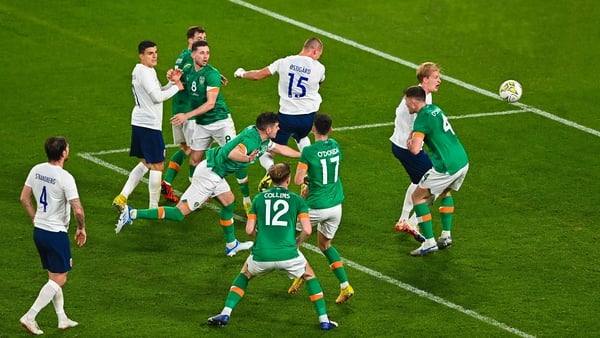