October 2020 was a difficult time for everyone, as the country moved in and out of lockdowns moved up and down through differing levels of restrictions.

Travelling to different parts of the country was limited and people were gearing up towards a difficult Christmas period.

Meanwhile the Republic of Ireland were aiming to qualify for their first major tournament, the European Championships, which were destined to take place over the Irish Sea in England.

Ireland were in Kyiv and all they needed to do was to avoid defeat and they would march on to the play-offs.

A horror back-pass from Áine O'Gorman evaded the stand-in goalkeeper on that day Courtney Brosnan.

Brosnan who was deputising for the injured Marie Hourihan, watched on helplessly as the ball trickled in to the far corner. Devastation.

Fast forward two years and Vera Pauw's side have gone one better and exorcised those ghosts, they have qualified for the World Cup.

"Courtney has been brilliant, so commanding in the box from start to finish," said O'Gorman.

"She took the pressure off even when we were under pressure towards that the end of the game."

Now the centurion cap-holder O'Gorman will turn to her focus into being on the plane for Australia and New Zealand next summer. The feeling hasn't quite sunk in yet.

"I think it's hard to put into words, we just keep turning around and saying to each other 'we're going to a World Cup! Oh my god!'

"We believed we could do it, we believed the country was behind us, but it's still hard to believe that we're actually going to a World Cup. It hasn't sunk in yet.

"But it's amazing. I don't know when that will sink in."

A stalwart of the squad, 33-year-old O'Gorman has seen it all since making her senior debut in 2006.

She was one of the leaders among the Irish senior women's team who campaigned for substantially improved working conditions in 2017. Those days are behind her now.

"I think we've gone from strength to strength and we've obviously got the backing of the FAI and the nation behind us and the resources in place now to compete at that level.

"Someone actually showed me a picture last night of the Liberty Hall and then us last night as well.

"It's amazing and I don't think we can forget all the players like Emma Byrne who were all part of this journey."

The team have gone from strength to strength especially since the introduction of Vera Pauw as manager and O'Gorman's decision to come out of international retirement.

"I was here for the team and I was always ready when the team needed me," said O'Gorman.

"That was what I came back out of retirement off the back of and look, probably only a couple of days ago, did I get any inkling that I would be in the team.

"So look, I'm a player that always just does my best, does everything for the team. And I obviously trained well, this weekend. I was delighted to be on the pitch last night."

As with the senior men's team in 1988, qualifying for a major international tournament can be the watershed moment for the development of football on the island.

This has been a life-time ambition which has now been achieved.

"And now we've done that. I think you can see the support that we're getting around the country, even the media and we're getting the public behind us.

All the girls participating in sport, girls and boys looking up to us as idols as well. So it's been amazing."

O'Gorman reiterated the FAI statement on their apology for singing the pro-IRA song which went viral during the post-match celebrations.

"Obviously, we got [caught up] in the moment, and we sang 100 songs last night and that was obviously the one that went out," said O'Gorman.

"We would just like to apologise to anyone that was offended."

Aine O'Gorman and Chloe Mustaki echo FAI's apology for the song that was sung in wake of World Cup qualification in Glasgow on Tuesday night #rtesoccer https://t.co/k3XLuHblmU pic.twitter.com/oIvzUn7LEz

Next on the agenda is the World Cup draw. O'Gorman is determined not just to make up the numbers.

"I think we can go from strength to strength.

"We're looking forward to seeing who we draw in the World Cup. We want to go out there and compete.

"We don't just want to be part of it, we will prepare in the best way we can to do that." 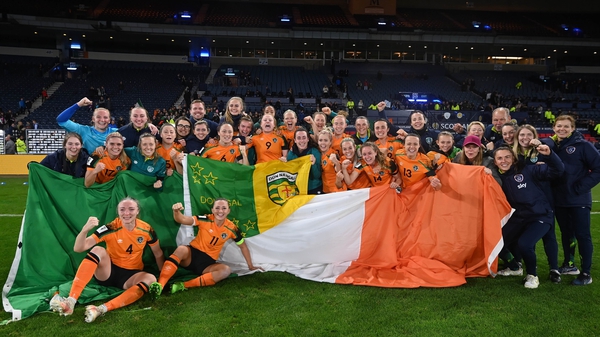