Welcome back to Glasgow.

For the second time in just over a fortnight, the Republic of Ireland are in town for an international derby, with the weather as reliably unreliable as you'd expect - clear and bright, cloudy and wet, mild then cold, calm but breezy.

The rainiest city in the UK doesn’t do extremes (Glasgow, like Ireland, is kept relatively mild due to its proximity to the Gulf Stream); but it’s almost always wet.

As Billy Connolly once said, "there are two seasons in Scotland: June and winter".

Stephen Kenny’s men’s team were sunk 2-1 in the UEFA Nations League here a couple of Saturdays ago, and while Hampden Park won’t be anywhere near full capacity tomorrow night, the Scottish FA are trying their best to get in a healthy crowd despite an unfortunate fixture clash.

Just as Ireland and Scotland kick off tomorrow, Celtic Park will be rammed for the Bhoys' Champions League game against RB Leipzig two miles across the city.

"What do I say about that?" Vera Pauw said. "We know where we stand and that's the reality."

Over 10,000 fans were inside Hampden last Thursday to watch a slog of a match, the rain teeming down throughout as Pedro Martínez Losa’s side ground down the higher-ranked Austrians in a physical encounter. 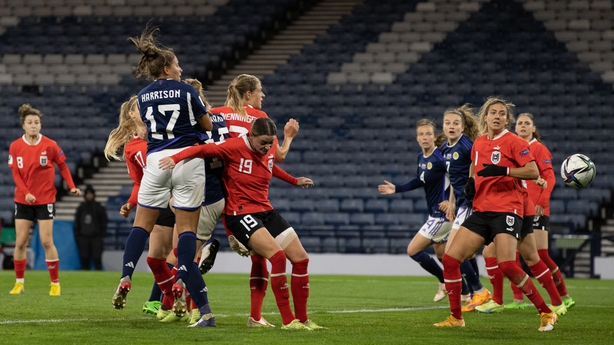 Abi Harrison - Chloe Mustaki’s team-mate at Bristol City - won it with a header in extra-time (above), and though Pauw wouldn’t admit it, the game unfolded pretty much just as Ireland would have wanted it to.

It was energy sapping and emotionally draining.

"They have played 120 minutes, but there’s four rest days so physically they will be ready," Pauw reflected afterwards. "But yeah, the emotions... we need to see how they handle that."

The Celtic match aside, it will be interesting to see what turnout the Scots get at Hampden given they have been trying to push tickets for this showdown even before Austria were defeated.

Adverts for the Ireland match were visible on the pitch hoardings last Thursday which raised some eyebrows, but it was a calculated roll of the dice from the marketing department rather than flagrant over-confidence.

The Scots have a serious aversion to footballing arrogance ever since they held a triumphant parade at Hampden to send their men's team off to the 1978 World Cup only for Kenny Dalglish and Co to return a few weeks later to a hostile Glasgow Airport after they had failed to get out of the group stages.

They certainly won't be counting their chickens ahead of tomorrow, but they will fancy their chances.

Scotland know Ireland well and vice versa. Martinez Losa managed Arsenal from 2014 to 2017, during a period when Katie McCabe looked certain to move on from the club.

Her chances became increasingly limited under the Spaniard, who signed her from Shelbourne in 2015, and it was only when he departed, replaced by Joe Montemurro, that the Tallaght native kicked on at the Gunners.

Pauw of course managed Scotland for six years between 1998 and 2004. She speaks fondly of her time there, reminiscing this week about the commitment of the players - "my Scottish terriers" - and the warmth of the people.

"It's just nice," she said of her return to Scotland.

"I don't care where I go, but it's nice to be there and maybe I can see one or two friends in between the sessions."

So it will have all the familiarity and strands of connection required for a spicy derby, with the stakes incredibly high. They even share a lingering pain that's driving their ambition.

Ireland endured a gut-wrenching end to their Euros campaign two years ago when they conspired to lose 1-0 to Ukraine due to Aine O'Gorman's freak own goal; Scotland failed to make it out of the group stages of the 2019 World Cup after they blew a three-goal lead against Argentina, drawing 3-3 following a five-minute collapse.

"It took me a long time to get over it [2019] but I had people around me helping me get back on my feet," defender Sophie Howard said this week.

"So yes, I'm very determined, especially with this group, it would make it very special. We're ready to go on Tuesday to make it happen."

That really is a shame because tomorrow is set up to be something special.

Two proud sets of players absolutely desperate to get over the line, fuelled by the pain of past disappointments and the tantalising prospect of being bathed in the glorious sunshine of a World Cup Down Under. 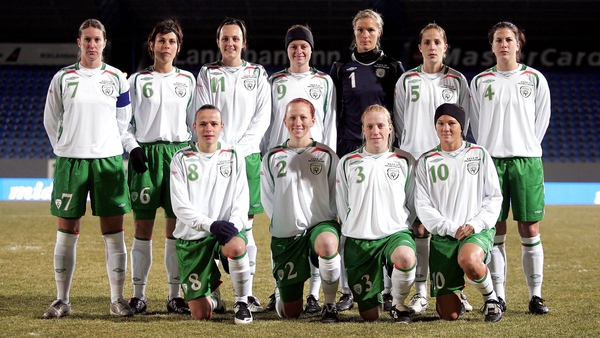 O'Gorman out to banish memories of Reykjavik ice rink