Ireland Under-21 manager Jim Crawford described his side's penalty shootout loss to Israel as a real "punch in the stomach" for the players, and rued their failure to take their chances in the opening leg in Tallaght.

After 120 minutes of football in Tel Aviv ended in stalemate, penalty misses from Tyreik Wright, Evan Ferguson and Dawson Devoy ended Ireland's hopes of reaching a first major championship at the age-grade.

"That's football for you, it can be cruel at times," Crawford told RTÉ Sport's Darren Frehill afterwards.

"I couldn't be more proud of the players out there today. It was backs against the wall stuff for large portions of the game. And we expected that, we knew that.

"It probably goes back to the first leg where we missed those gilt-edged chances, where had we scored them, it would have put us in a really strong position coming out here. We obviously caused them some concern because they dropped down three senior players who played on Saturday against Albania.

"It probably goes back to the first leg where we missed those gilt-edged chances" - Republic of Ireland U21 manager Jim Crawford reflects on their bitter playoff defeat in Tel Aviv with @DarrenFrehill last night pic.twitter.com/ZhOilz5sch

"They knew the threat that we posed. The players did their country proud, their clubs proud, they did their grassroots clubs proud, the coaches who got these players interested in football in the first place, their parents proud. It's a great group of players. And that's 1 to 25.

"It was very difficult leaving players out of that today. As you saw at the end, everyone was together. Everyone is devastated in the dressing room there. That's what we set out to establish with this group of players.

"The performance for me... there was a lot of blocks, a lot of first contacts in our own box. We created a couple of chances ourselves. Coming out here, we lost even more players. Mark McGuinness, Luke McNicholas, Gavin Kilkenny got injured and a few others. All I can say is the future in the short to mid-term looks really promising."

"It probably goes back to the first leg where we missed those gilt-edged chances, where had we scored them, it would have put us in a really strong position coming out here

In the wake of the shootout, Crawford played down the relevance of practising penalties, insisting the pressure involved was of a different order to what one experiences in a competitive situation.

"You can practice penalties all you want. Nothing compares to the pressure that was on these players today. Every fan whistling at them and booing them as they were stepping up to take the penalty.

"It's a real punch in the stomach for the players. They didn't deserve it because of how hard they worked. The young boys that have come in have stood up to the test brilliantly. Some of them have really, really promising futures ahead of them." 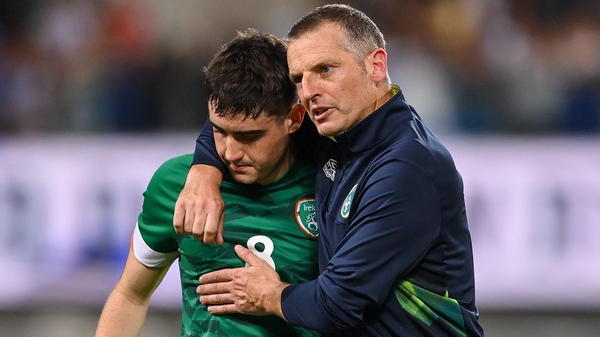 Shootout agony as Under-21s lose out in Israel