A campaign that started over 12 months ago with a win in Bosnia ended in Tel Aviv in heartbreaking fashion as Jim Crawford's Under-21s lost their European Championship play-off on penalties.

After over two hours of energy sapping action at Bloomfield Stadium and the sides remained scoreless, progression would be decided by a shootout - it could not have gone much worse for the Republic of Ireland.

Israeli keeper Daniel Peretz was the hero with three saves, but in truth the penalties of Tyreik Wright, Evan Ferguson and Dawson Devoy were poor. There was even more frustration with the fact Irish stopper Brian Maher was inches from stopping Eden Karzev's first penalty for Israel.

Wright, Ferguson and Devoy were all substitutes as Crawford used his full complement to try and refresh his team amid fierce heat and humidity - Conor Coventry, Ireland's designated penalty taker, was the only Irish player to find the net.

Penalty heartbreak as the Republic of Ireland Under-21s miss out on qualification for European Championships after a 3-1 shootout defeat to Israel #IRLU21 #COYBIG pic.twitter.com/rJ08slbeWZ

Israel had gone into the game as favourites after drafting senior players Liel Abada of Celtic, Maccabi Netanya midfielder Eden Karzev and Olympiacos defender Doron Leidner into their squad.

All three, who played against Albania in the Nations League on Saturday, started the winner-takes-all clash, which the home side did dominate for long stages, without threatening the Irish goal too often during a tense encounter.

The hosts probed in the first half but were repeatedly repelled by the Irish defence. Abada and Oscar Gloukh shot wide while Idan Gorno forced Maher to save.

Ireland threatened early in the second period when the hard-running Aaron Connolly cut inside but his curling effort missed the target.

Oh my word, what a let off. Ronny Rosenthal may have competition for the greatest miss by an Israeli footballer from the unfortunate Gorno.#rtesoccer
📺 Watch - https://t.co/QGOhiL7AsI

Maher saved from the impressive Gloukh and Abada as Israel came back again while Gorno produced possibly the greatest miss by an Israeli footballer since Ronny Rosenthal, as he struck the wrong side of the post from three yards with the goal at his mercy.

Ireland had some opportunities late in normal time but Connolly flicked wide and Andy Lyons shot over.

Substitute Finn Azaz almost snatched a late winner after good work by Will Smallbone but Israel goalkeeper Peretz produced a good save.

We are into extra time in Tel Aviv!

Neither side could work the keeper in the additional 30 minutes, meaning the place in the finals would be settled by spot-kicks. 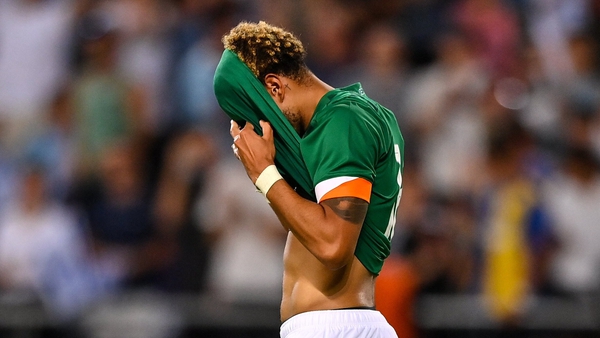