Tempo: The speed or rhythm of a piece of music; the speed of any movement or activity

"What's your definition of tempo?" pondered Stephen Kenny at the pre-match press conference on Monday morning.

The question relating to tonight’s clash with Armenia, which has, all of a sudden, turned into a relegation battle, with the threat of demotion dangling over this Ireland team going into the last game of the UEFA Nations League.

A trio of terrible campaigns, in truth, for Ireland in the relatively recent Nations League competition, as they finished rock bottom in their first venture – a Martin O’Neill/Roy Keane production – before scraping through a final-day relegation battle with Bulgaria second time around under Kenny.

Third time has not been a charm from a results perspective, at least, with Ireland looking to get to a maximum of seven points from six games played – they currently sit on four, with the only win coming against Scotland in June.

Armenia come into tonight’s game just one point behind Kenny’s side, thanks to that shock victory over the travelling Irish in Yerevan at the start of the summer series.

Adagio rather than allegro in that particular encounter, as Ireland failed to move the ball at the required pace to trouble a deep-defending Armenia side, before a top-class Eduard Spertsyan strike decided the contest.

"What does it mean? It's such a word that is used, isn’t it?," continued Kenny, on the meaning of tempo, almost sounding Shakespearian on the subject. "Does it just mean to get it forward quicker?

"In my book it doesn't, but we need to move the ball quicker than we did in the away game, for sure.

"Our passing needs to be crisper and we need to penetrate in a more progressive way than we did in Armenia."

Sweltering summer temperatures combined with end-of-season lethargy were the most likely causes of the below-par and below-pace performance at the Republican Stadium, however, there should be no such issues this evening as Kenny will name an energetic XI, coming off the back of a decent performance in defeat against Scotland.

Armenia, on the other hand, have done absolutely nothing in their subsequent four games to suggest anything other than an Ireland win at Lansdowne Road tonight – Ukraine stuck five past them on Saturday.

Tempo in football is generally accepted as the pace at which the game is played, but of course, it is up to the individual conductor to choose the relevant sections and guide his orchestra accordingly.

Previous Irish teams have looked to create a high tempo in the game, but one that is often reliant on forcing the opposition to make mistakes in possession, while moving play quickly from back-to-front, often bypassing midfield en route to the final third.

Kenny’s style is more akin to maintaining possession, moving the ball quickly and "working through the lines", as a modern coach might utter.

Without doubt, this has captured the Irish supporters’ imagination and is pleasing to the purists, however, it carries the risk of increased scrutiny if the results are not forthcoming.

Two years into the experiment and the win ratio has not been consistent with a side expected to qualify for major tournaments, and no doubt, certain critics would suggest that a Martin O’Neill or Mick McCarthy team would have "shut up shop" once taking the lead at Hampden Park.

A comprehensive victory is needed to put Kenny’s side back on track going into the November friendlies and on to the Euro 2024 qualifiers, however, the current campaign will also be scrutinised by the decision- makers in the FAI.

Points or progress? Ideally both for the manager to get everyone on board ahead of the vital run of games next year, and while the points have not been accumulating accordingly, it is hard to argue against the progress of the current side.

Recent performances have been impressive, including the 2-1 defeat in Scotland, vying against a team with better quality of players, in terms of clubs represented, and lessons will have been learned regarding the slow starts to campaigns and the importance of putting points on the board early in the campaign.

Kenny has already revealed that plans are in place ahead of next June’s matches to ensure that there is not a repeat performance in the vital qualifiers, which shows the attention to detail that he brings to the role of national team manager.

But the focus is very much on tonight’s game, and you might imagine that Kenny will not relax until his side are two or three up against this Armenian outfit.

"One or two changes, nothing radical," said the manager ahead of the game, and with Josh Cullen suspended, expect to see more or less the same team that started against Scotland.

Jeff Hendrick should return to the midfield in place of the banned Burnley man, which leaves no more than one or perhaps two other changes to the side.

Striker rotation would always be part of the discussion when goals are a prerequisite, but it really is hard to read the manager’s intentions in this regard.

Troy Parrott has not delivered in the goalscoring stakes this season, however, Kenny rates the young Dubliner's ability to link midfield and attack, so the manager may decide to bring Chiedozie Ogbene in from the start, with Michael Obafemi the one to be replaced.

If a radical move was to be made, it may come in the guise of a formation change, placing an even greater emphasis on attack, which could suit a natural goalscorer like Scott Hogan to play in the middle of a front three, with Jason Knight moving to the right with a possible role for Callum O’Dowda, who would bring pace and quality into the forward line.

Shane Duffy and Seamus Coleman may once again be left to play a supporting role, while the manager is likely to stand by Matt Doherty, despite the widespread criticism of his defensive duties in Glasgow.

November friendlies will bring Norway to Dublin, which could provide a real role for Duffy to return and attempt to cancel out the threat of the marvellous Erling Haaland, while the away trip to Malta could have been selected for some warm-weather training and a team-building exercise to focus the minds ahead of the March qualifiers.

By then, the team will know who they will be facing in the 2023 qualifying campaign. However, the outlook and atmosphere may look a whole lot different if Armenia were to pull off the unthinkable at the Aviva tonight.

Follow the Republic of Ireland v Armenia tonight (kick-off 7.45pm) via our live blog on RTÉ.ie/sport and the RTÉ News app, watch live on RTÉ 2 and the RTÉ Player or listen on RTÉ 2fm. 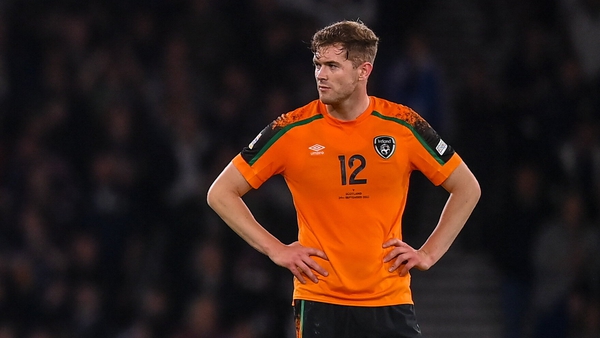 Nathan Collins reflects on journey from Cherry Orchard to Wolves