Nathan Collins was born and raised in Leixlip - but the foundations of his football career were laid in Cherry Orchard.

Back in June, he scored one of the great Irish goals when he surged up the field and brilliantly cut through the Ukrainian defence to put his team 1-0 up.

The 21-year-old then became the biggest Irish transfer of all time in the summer when he moved from Burnley to Wolves for a reported £20.5m.

There's been the odd bump in the road - he saw red for a wild challenge on Manchester City's Jack Grealish earlier this month - but generally Collins' career has been on a major upward curve for quite a while now.

And it all started in the renowned Ballyfermot nursery that has produced the likes of Keith Fahey, Mark Travers, Enda Stevens and Andy Reid.

"I was at Cherry Orchard from when I was five," he told RTÉ Sport.

"I got back there in the summer they had a little camp on. I met all the kids, met all the staff I'd known for years. You go into the clubhouse and you see all the pictures, [the players] who've been there. It helped me strive to be a footballer.

"It had everything I needed. It had that family support, the people around me who never let me get too big for anything. They always kept me grounded. I couldn't be any more thankful for them."

Collins went to Stoke City when he was 15 and settled quickly. After a few years of development, he broke into the first team and started to turn heads - Manchester United were heavily linked a year ago, but Collins went to Burnley instead, suffering relegation after a tough campaign but displaying enough talent to attract interest from a few Premier League clubs in the summer. Wolves won the race.

"It's a big step," Collins said of the graduation from the Championship to the Premier League.

"It wasn't the physical part of it, it was more the mental challenge of concentrating for 90 minutes, being on it every game because every player you come up against is unbelievable, no matter what team it is. Once you switch off once you'll be dead in the water.

"I just enjoy the challenge of it. I want to play football at the highest level for as long as I can." 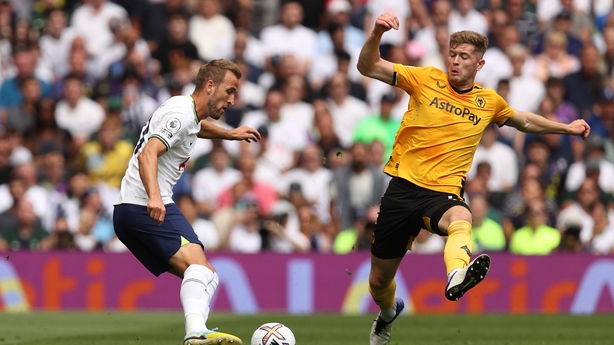 Collins comes from serious footballing stock. His father David played for Ireland up to U-21 level, his uncle Eamonn also played underage for Ireland and later managed St Patrick's Athletic, while grandad Michael won the FAI Cup with Transport in 1950.

"As soon as I hit secondary school I said to my mam and dad, 'I'm not going to be here long'. I knew I wanted to go to England, I knew what I wanted to do. They could only hold me back for so long.

"My dad understood it because he did it at a young age, but I think it was a lot harder for my mam to let me go."

His focus now is on ending Ireland's Nations League with a home win against Armenia tonight - a game Collins is not taking lightly.

"I'm playing it as a cup final. It's a huge game for us and I think all the lads understand that.

"I want to go there, put in a real performance, get a win.. this is the last game isn't it, so we need to go out on a high."

Follow the Republic of Ireland v Armenia on Tuesday (kick-off 7.45pm) via our live blog on RTÉ.ie/sport and the RTÉ News app, or watch live on RTÉ 2 and the RTÉ Player