Shamrock Rovers manager Stephen Bradley feels that his squad are still well equipped to deal with their heavy workload despite recording just one win from six in their September fixtures to date.

A 5-1 league win over Finn Harps has been accompanied by an FAI Cup exit at the hands of Derry City, a Europa Conference League defeat to Genk and a draw with Djurgardens and a league loss to Bohemians.

The last on the list was Thursday's goalless draw with Shelbourne at Tolka Park where the visitors failed to create too many golden opportunities, but Bradley feels that they can still handle their hectic schedule.

"On Sunday we played 60 minutes [v Derry] and then extra-time with 10 minutes and the fitness levels are fine," Bradley said afterwards.

"You have to recover right, review the games and move onto the next game very quickly and get ready," he added with how they’re dealing with the issue.

"That’s been our schedule for quite some time now, not much actual training getting done, more tactical and video and getting ready for the next game."

The recent dip in results has opened the door to Derry City to put real pressure on Rovers at the top of the Airtricity Premier Division table.

The Candystripers are just two points off the summit albeit having played a game more.

Bradley had no argument with the latest result though, and felt that they hadn’t done enough to warrant all three points at Tolka Park.

"It probably was a nil-nil, I know Dan [Cleary] hit the crossbar but it’s from all of 30 yards.

For opposite number Damien Duff, it was another pleasing night to round off a fine week that saw them earn a spot in the FAI Cup semi-finals at the expense of Bohemians on Sunday.

"Considering the week we've had, I think it’s a very, very, very good point against the best team in the country, the best players," Duff told RTÉ Sport.

"Absolutely deserved, we could have nicked it," he added. "We had a lot of kind of nearly moments from start to finish. Obviously it didn’t drop for us, but a well-deserved point."

It’s now three clean sheets in four for Duff’s side, and the fact that Dundalk, Bohs and Rovers were the sides left frustrated adds to the sense of achievement.

"That’s what we try to build everything on here, hard work and pressing is a massive part of the game," Duff said of keeping Rovers at bay.

"It’s difficult to do for 90 minutes, the best players are going to pull you about, they’re going to keep the ball. That’s where you have to put your ego away, bite down on the gumshield and that’s what the lads did."

"We work on our shape, a long with other things, a lot," he added.

"We look solid, I'm not saying I’m sitting on the bench with cigar out thinking they’re not going to break us down. At the end of the day it’s Shamrock Rovers, they’re the best team.

"We looked ultra compact, lads working hard for each other, putting in an amazing shift." 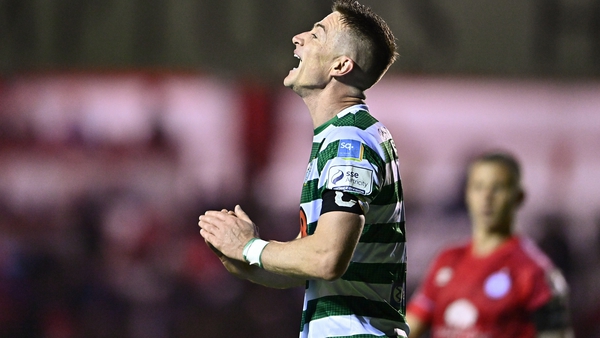