Josh Cullen believes that Ireland will have to get the balance just right going into the much-hyped UEFA Nations League clash with Scotland on Saturday.

Games between the two sides have generally descended into a derby-style encounter of Celtic cousins, and the recent game in Dublin will certainly have added fuel to the fire that is expected to be burning white hot at Hampden Park.

Ireland, of course, put the Scots to the sword in the reverse fixture in June, which added to the woes of the travelling Tartan Army, who were already attempting to digest their World Cup exit just days previously.

Steve Clarke's side bounded into the current international window full of confidence following a comprehensive 3-0 victory over Ukraine at Hampden on Wednesday night, and now the players appear to have revenge on their mind as they whetted their appetite and that of their kilt-clad supporters as Ireland arrive in Glasgow on Saturday night.

The Ireland camp, however, have been busy going about their own business, enjoying a full week of preparation ahead of the game, and as if to emphasise the fact that they are the masters of their own destiny, there was no big deal made of the Scotland versus Ukraine clash in the team hotel.

No group viewing of the game, but rather the players watched it individually, while the manager had a chat to the team about it on Thursday morning, and Cullen was quick to point out that the match, just like the game during the summer, counts for little ahead of kick-off on Saturday.

"It was a good result from them," said Cullen, speaking at Thursday’s press conference.

"Their performance was obviously full of energy and it was a good win, but Saturday is a new day and we have to be confident and full of belief that we can get a good result.

"We didn’t watch it as a group," he added. "I’m sure everyone was keeping an eye on it. And yeah this morning we had a meeting and touched on the performance from Scotland and how they set up and how they performed.

"We still have a couple of days to prepare and talk as a team, but the main focus is on us. We need to make sure we go and perform as best as we can.

"But Saturday is a new day against a new team and we’ll be going there full of confidence from the preparation we had."

Confidence appears to be the buzz word in the Ireland camp this week as all the players appear to be full of belief following 12 months of gradually improving as a unit, while backing it up with performances and results.

And Cullen believes that a lot of that confidence comes from scoring goals, most notably in the Scotland game, where Ireland scored three and kept a clean sheet in an all-round excellent outing.

"The goals we scored, being clinical in front of goal, a goal from a set piece - a great goal, the pass from Mikey and the great finish from Troy, and a bit of brilliance from Mikey for the third goal as well," said Cullen, when asked what the team did well in the previous game with the Scots.

"We can take the belief as a team that we have scored goals against them and we'll be looking to do that again, different types of goals, but all over the pitch we were full of energy and won individual battles again."

But the former Anderlecht and West Ham midfielder stresses the fact that there is a balance to take into Saturday’s game, by drawing from the positives but accepting that it will be a completely new challenge.

"No game is the same and it's going to be a new game on Saturday and we can't read too much into what happened in the summer," said Cullen.

"Obviously, we take the positives and belief from it but it's a new day and a new game. We've had a good week to prepare and we're looking forward to the game now and we want to put in a good performance and try get a positive result.

"You have to have a balance," added Cullen. "Don’t get me wrong, we still looked at the game in the summer and areas where we can improve, and not just getting carried away that we won 3-0 and everything is going to be fine.

"There were areas of that game that we sat down and analysed as a team where we can improve as well, and we’re working on that this week.

"I’m sure the same goes for Scotland, I’m sure they’ll review their game last night that they won 3-0 and look at areas where they can improve."

Aside from Scotland’s victory against Ukraine, the home side will go into Saturday’s game as group leaders and they will also be looking to build momentum heading into next year’s Euro 2024 qualifiers.

The Scottish squad is also packed with Premier League players and whether it is seen as a revenge mission or not by the home side, Cullen said that Ireland are just treating it as a standalone game, while offering the opponents due respect ahead of the game.

"We’re hungry as well to go and get another result," said Cullen. "If they see it as a revenge mission or however they view the game, we’re just as determined to go there and get another three points and put in another good performance.

"That doesn’t change how I view the game, or how everyone in camp views the game.

"Of course, we respect Scotland, they have good players and are a good side. We’ve analysed then and shown them full respect in our preparation.

"We’ve analysed areas where we think we can hurt them and get at them during the game, and we have analysed their threats that obviously we’ll be trying to nullify. It comes down to us to put all of that into practice on the day and if we can do that, we’re confident we can go and get another result."

Cullen, of course, is back in England playing his club football after two seasons in the Belgian league with Anderlecht, following manager Vincent Kompany from Brussels to Burnley.

And the mainstay in the Ireland midfield throughout the Stephen Kenny era is happy to have made the move back to Turf Moor, where his side are pushing for promotion to the Premier League.

"I have really enjoyed it," said Cullen. "It has helped that I'm playing under the same manager and we're trying to implement the same style that I was used to at Anderlecht under him.

"I am enjoying my football and credit to the lads at Burnley, it has been a change in style to what they are used to and we have done well to get to where we are at the minute.

"I haven't had the conversation with him [Kompany] as to exactly why he brought me but I take that as a little bit of a compliment that he made the decision to bring me to Burnley.

"The schedule is much more hectic than what I was used to in Belgium where it was predominantly one game a week and now you could have three games in six days.

"It's been a little bit of a shock getting used to that again, but as a player it's so enjoyable as you want to play as many games as you can. It's part of the job. It has been something to get used to again but it's something I'm loving." 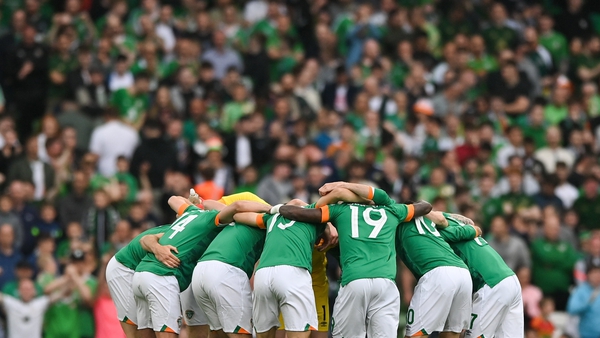 Ireland to face Malta on day of World Cup opener