"Without doubt, it absolutely would be the pinnacle of my career."

For a player with a World Cup goal for Ireland and Premier League winner's medals among a host of other achievements, it's clear the prospect of potentially winning the FAI Cup as a manager occupies some of Damien Duff's dreamscape.

There's still a long way to go for his Shelbourne side though. But steady progress has been made in this year's competition, with the high point being the impressive swatting aside of Bohemians in the quarter-final on Sunday to book a last-four clash against First Division Waterford who have already shown a propensity to rise to the occasion.

The mantra of taking things one game a time still holds true for Shels' staff and their young squad but that isn't stopping captain Luke Byrne from daring to dream of lifting the prestigious trophy.

"I've visualised it even before the quarter-final," he told RTÉ Sport at the Aviva Stadium this week as EA Sports announced the return of the SSE Airtricity League Club Packs in FIFA 23.

"I've visualised it and it helped motivate me for Sunday and (winning the cup) would be the best day of my life, the biggest achievement of my life. I couldn't imagine anything better. So of course I'm going to dream about it and I'm going to do everything in my power to make sure it happens and as a team that's all we have to do."

The manner of the victory over Bohs went against the grain of recent results. They had gone five league games without winning, the last three of those without scoring but ultimately ended up playing what Duff described as "the perfect game".

So what clicked at Tolka Park?

"Individually everybody played to a very high level. Collectively we carried out the game-plan. We changed our style a little bit on Sunday and all the lads adapted well to it.

Shelbourne booked their place in the #FAICup semi-finals in some style with a 3-0 win over neighbours Bohemians today pic.twitter.com/teaMsCGV2Z

"They understood their roles and the manager and the staff, they got it spot on. They asked us to play a certain way and look, we were convincing winners and it could have been more than three I think on the day."

It's the type of performance at the old ground, on a big occasion, that the Tolka Park faithful had been waiting for as the club look to move on from what Byrne himself describes as "yo-yo" years.

Indeed, at the start of the season, the team struggled to turn the ground into a fortress and it wasn't until May that a first home win of the season arrived.

That was against Sligo Rovers and coincidentally fell the same week that Shelbourne had positive news about their future at the venue with Dublin City Council recommending abandoning plans to rezone the ground for residential use.

Whether it influenced the result beyond coincidence can't be answered but it certainly didn't hamper the performance.

"We were all as players aware of the news that week. I think it added to the atmosphere in the stadium," he said.

"The fans were obviously really, really happy. All their hard work had paid off and as players I felt we think we knew there was an extra responsibility on us that week to finally pick up that first win because football is a great way of making memories and it was a great feeling that night when we won the game and everybody went home very happy."

In about six weeks, Duff's tenure at Tolka Park will have reached the 12-month mark and it was an appointment that garnered plenty of interest given his garlanded status within the Irish game.

Byrne, who had played alongside the former Chelsea, Blackburn and Newcastle winger at Shamrock Rovers and coached alongside him as a youth coach at both the Hoops and Shels, had been enthusiastically anticipating what the 100-time Boys in Green cap could bring to Shels as a first-time senior manager.

Byrne feels great asset Duff and his assistant, former Ireland defender, Joey O'Brien, have led with is a clear communication style and singing from the same hymn sheet.

"It's difficult to say what their dynamic is like because probably like you touched on, there's a stereotype about whether it's good cop, bad cop or whatever. Theirs isn't like that," said the defender.

"What I feel is really good about them is they always give the same message. They see the game the same way.

"If I've seen something in the game and I go to the manager or Joey, it doesn't matter (because) I'm going to get the same information back which is brilliant.

"It creates consistency and it helps us all know our roles and the two of them, along with the other members of staff, they've all played at the highest level, played for their country and naturally getting to those kind of heights, they've seen stuff, learned stuff and they're passing that on to us as players."

Byrne and co will be hopeful that it will prove enough to take Shels to a showpiece this season with the 16 October cup semi-final date looming.

But before that showdown with Waterford, Byrne knows maintaining momentum will be key even if their position in the table offers neither threat below nor tangible opportunities above.

"Of course the big one now is the semi-final. But we've four league games between now and then so we know we can't take our foot off the gas and expect us to flick the switch on 16 October. It won't work like that but the manager demands high standards every day, every game and he treats everybody with the same respect and as players we have to do the same." 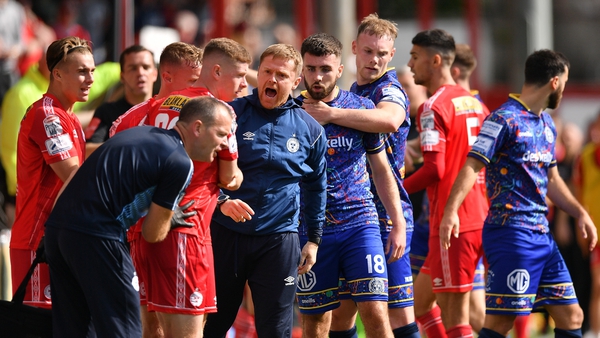