Jayson Molumby fulfilled a life-long ambition when he made his international debut in a UEFA Nations League clash with Finland in September 2020.

A childhood dream, perhaps, a total anti-climax for sure, as Molumby recalls a "horrible" occasion in a soulless stadium with no fans present to witness the fixture.

In fact, the player looks back at those opening games in the green of his nation with a critical eye on his own performances in what was an unstable time in his emerging club career.

Tipped to make a breakthrough with Brighton in the Premier League at the start of the 2020-21 season, which coincided with his Ireland debut, the highly energetic midfielder would eventually go out on loan to Championship side Preston, before moving to West Brom in the summer of 2021.

Not only did Molumby have to contend with club uncertainty at the time, but his arrival into the Ireland squad came at a time of Covid chaos and awful international results under a new regime intent on changing all but the colour of the national shirt.

It would take 11 caps for the Waterford native to finally play in front of Irish fans at Lansdowne Road.

Twelve months on from that home tie against Azerbaijan, when the fans were finally allowed back into the Aviva Stadium, Molumby has made his move to West Brom a permanent one, and it appears to sit well with the player who has appeared to grow into his green Ireland jersey throughout each of his 14 caps to date.

"We've just been waiting, and the last two results were positive, so we're ready to get going again on Saturday.

"Hopefully I can play and contribute to the team. That's up to the gaffer, obviously, but hopefully I can feature in some way, shape or form." Molumby has been with the new manager since the start of his reign, having previously played under Kenny for the Ireland Under-21s, and despite the string of poor results, where it took Ireland 12 matches to secure a win, while only managing one goal in their first eight games, the midfielder feels that the team are starting to peak.

Positive performances against Portugal, Serbia, Belgium and Ukraine, combined with the emphatic 3-0 victory over Scotland, certainly back up the player’s claim, and the team will go into the final two games of the Nations League brimming with confidence.

"We didn't get off to a great start, I think everyone knows that," said Molumby. "But we made some good changes for the Scotland and Ukraine games. There have been a lot of positives over the last couple of months.

"I'm hoping that we're starting to peak, starting to get a bit of consistency and form going now. Starting on Saturday, we need to continue in the way we played in the last two games."

And while Molumby was his own biggest critic of his early days in green, he believes that his club form and consistency have allowed him to grow as a player.

"I came in early and, to be honest, maybe some of my performances at the start were not up to scratch. I wasn't playing at club level quite often," he said.

"A few of the lads I grew up with are still there" - Republic of Ireland midfielder and Cappoquin man Jayson Molumby has been delighted by Waterford FC's run to the #FAICup semi-finals #NationsLeague pic.twitter.com/6WDfV5F0C4

"Now I feel that I'm playing at club level week in, week out, I feel confident, feel ready, and I think I’m a lot more mature now in every shape and form.

"When I first came in to play for Ireland against Finland there were no fans at the Aviva.

"Since I was a kid, the goal was only playing for your country. You had a vision of a packed-out Aviva and ended up playing ten or 11 games, with no fans. It was horrible.

"[When the crowd returned] it was incredible. They can get the best out of you. It’s an unbelievable feeling having fans, and it gives you that extra boost as player.

"For a player, it’s what you dream of. [Before that], it was a really strange experience.

"Personally, I didn’t feel I had played for my country with no fans. It just felt so strange." 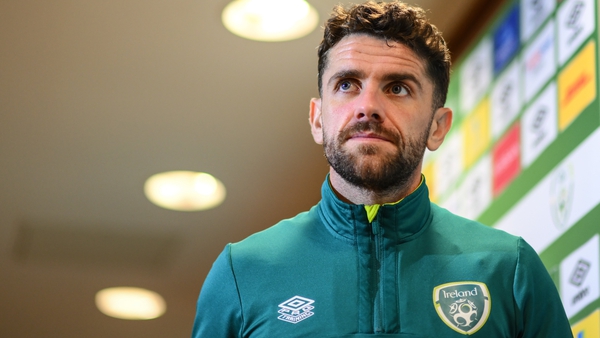