Robbie Brady is ready to kickstart his international career and is looking to the future with his country ahead of the upcoming games against Scotland and Armenia.

The versatile midfielder has not played a game for the Republic of Ireland in 18 months, since featuring at the start of the ill-fated 2022 World Cup qualifying campaign.

Back in the March 2021 international window, Brady was involved in the opening 3-2 away defeat in Serbia as well as the shocking 1-0 home loss to Luxembourg at the Aviva Stadium.

The Dubliner then started the friendly international away to Qatar – a game that was played in Hungary – before hobbling off injured after 21 minutes of play, having been involved in Ireland's goal early in the game.

Brady’s injury issues continued throughout, as he left Burnley for Bournemouth for a stop-start season in the Championship, before signing for Preston North End during the summer.

But now, following a consistent start to the season at his new club, Brady appears to be getting back to his best, and has been rewarded with a recall for Ireland ahead of the final two games of this year’s UEFA Nations League campaign.

"It's been too long," said Brady, speaking at Monday’s press conference at Abbotstown. "It’s great being back in. You just pick up where you left off, and the lads seem happy to have me back in.

"I'm delighted to be here. Looking forward to a good week hopefully."

A tough time away from the game, and Brady admitted that it was equally hard to watch the international action from the outside. However, he said that he never doubted that the opportunity would arise again to return to wear the green.

"No," said Brady, when asked if he felt that he wouldn't get back into the squad. "Obviously, it is difficult when you are out, and missing the trips is a hard one to take, but my body wasn't behaving itself.

"That's the hardest part of the whole thing, the mental side of it. When you're younger, you just brush things off, and you just get on with it.

"When you've done a couple of long-term ones, it's difficult. You know what you want to do but at certain times your body isn't allowing you to do that. Like I said, I'm in a fit and healthy place now and please God that's all behind me. 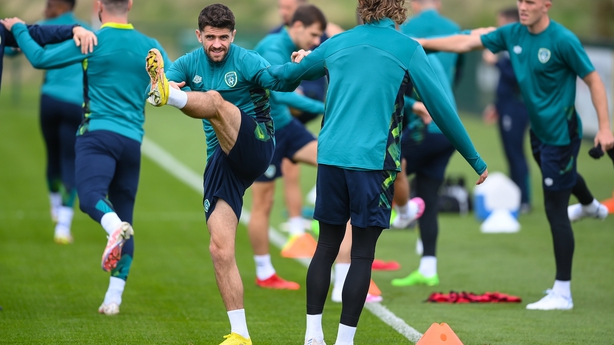 "It was difficult [being without a club at the start of last season]. I had quite a few offers actually around the transfer window, but I wasn't ready to go into somewhere and start.

"I left it as late as I could and Damien [Doyle, FAI Head of Athletic Performance] gave me the option of working with him back here, which was brilliant, and I managed to move when the window closed.

"It is obviously not nice when you are not ready to go in somewhere, but things worked out. I am back playing and back involved which I am delighted about."

"Everything has been good so far, long may it continue."

Part of the Bournemouth squad that secured safe passage back to the Premier League following a second placed finish last season, however, Brady was released at the end of his contract having only featured in a handful of appearances for the Cherries.

And he actually had to undergo a trial period with his new club ahead of signing for the new season, and while it is often a process that players are unwilling to undertake, he explained that it was an arrangement that suited both club and player.

"No, it was where I was at," said Brady, when asked was it weird going on trial.

"The manager phoned me and said 'we'll have a chance to see where you are physically, and you can come in and have a look at us and see if you like it as a club and the way we are trying to do things’.

"It was pretty straightforward when I went in, there was a lot of factors that suited me and I'm delighted with it and like I said I'm getting the minutes in, which is what I needed."