If that take from a League of Ireland legend can be considered 'conventional wisdom', then we will know for sure just after half-nine on Friday evening if that race is indeed on.

'Do we have a title race?' - Shamrock Rovers' loss in Dalymount Park sees the gap to Derry fall to four points - Stuey Byrne and @1GaryRogers assess whether the Candystripes have a realistic shot at unseating the champions in the run-in #rtesoccer #LOI pic.twitter.com/yAOmTUqJyu

Derry will be hoping to take advantage of a two-day head start on league leaders Shamrock Rovers with a win over managerless Bohemians in front of the RTÉ cameras at the Brandywell.

Rovers don't play until Sunday evening when they will host second-bottom Finn Harps in Tallaght.

The visitors' dugout will have a new look about it of course, as Derek Pender and Trevor Croly have taken temporary charge following the departure of Keith Long, and Derry manager Ruaidhrí Higgins feels that Bohs are a potent threat regardless of who is in the hotseat.

"It's never nice to see anyone lose their job, but Keith can be very proud of the progress the club has made while he has been manager" he said.

"Obviously Derek and Trevor know the club and the league very well too. You'll see it across the world that teams can get a bit of a bounce out of a change of management, so we have to be ready for that.

"I've said it many times before that Bohemians boast some of the best attacking options in the league. They come into this on the back of their win over Shamrock Rovers and I'm expecting a very tough and close game."

"We're on the run-in and our supporters have a huge role to play between now and the end of the season. I'm asking them to get right behind us as we look to finish as strongly as possible. "

City face a tougher test than the league leaders against a Bohs side who arguably provided their best display of the season in beating Rovers 1-0 in the only game they’ve played since parting company with Long a fortnight ago.

"They dug in, they helped each other, they played as a team tonight. They played really a Bohs way," beamed stand-in gaffer Pender after that Dublin derby triumph.

Derry eased past basement boys UCD 3-0 last time out, but the Dalymount Park side will provide much sterner resistance. A win for Derry will take them within a point of the defending champions, albeit with a couple of extra games played. Still, points on the board and all that…

Will Patching and Declan Glass will face late fitness tests for the hosts who otherwise have a full squad to chose from.

If St Pat’s want to keep in the hunt for a top-three finish, nothing less than three points will do at United Park on Friday evening.

The Saints beat Finn Harps 2-1 last time out with goals from Chris Forrester and Anthony Breslin. Having found themselves 2-0 up inside 18 minutes, it still proved a nervy second half at Richmond Park after Barry McNamee’s 24th-minute strike for Harps.

At the final whistle, however, the three points were tucked away to keep Tim Clancy’s side’s decent run of form ticking along nicely. 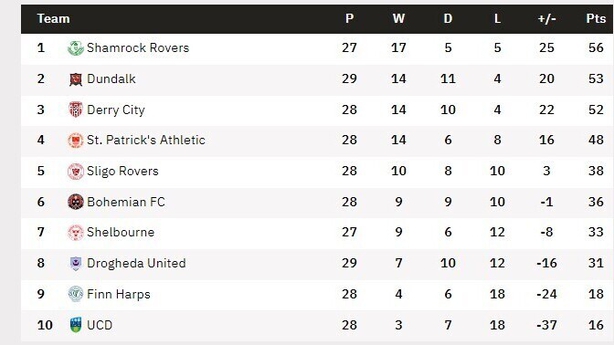 Former Sky Sports’ pundit Rodney Marsh liked to refer to the end-of-season malaise that effects teams with nothing to play for as 'the Benidorm factor'. It’s unclear if any of the Drogs staff have flights to Alicante booked, but either way, it will be a stiff test for the hosts against the visiting Inchicore men.

A battle for mid-table honours at Tolka Park. Damien Duff has had plenty to say for himself during his first season in charge of Shels, and his young side have shown plenty of promise on the pitch while they’re at it.

These sides both did battle with Wee County opposition last time out. Sligo took care of Drogheda on Saturday, goals from Frank Livak and Aidan Keena went unanswered by the Louth side. The night before, Shels played out a goalless draw up in Dundalk.

Duff reckoned a performance like the one at Oriel Park will give his "babies" plenty of belief going forward.

Shels unfortunately lost Conor Kane towards the end of that game with a nasty injury that manager Duff confirmed today will keep him out for the rest of the season.

Shelbourne manager Damien Duff was pleased with how his side performed in Dundalk but feels that the game was there for the taking. He also offers an update on Conor Kane's injury. #RTEsoccer pic.twitter.com/ojv6YgZZwI

However, Duff was delighted this week to see Aaron O'Driscoll return to the field after a recent concussion. He also told Shelbournefc.ie: "Mark Coyle will be involved in the match day squad, he’s making progress but we have to be patient with Mark, we don’t want any more setbacks.

"Jad is making small gains each week. He’s not right yet, when he’s ready, it’ll be great to have him back. Lukey is struggling, he’s doing everything to play through it, but he’s carrying some injuries. Kam picked up a knock in training, we’re hopeful he’ll be involved, but he’s also struggling.

"On the flip side, JR Wilson is back from suspension, he’ll be important for us and the big man Sean Boyd is also available again, which is a boost for sure.

"Sligo are in a good place. They're playing well. They’ve a good young manager in John Russell. It’s a real test for us. We know how important it is with this game and what’s to come, to turn up get a result and put in a performance."

Sligo manager John Russell expects another tough encounter in Drumcondra:' 'Shelbourne will be a tough test. They are well organised and they have picked up some good results this year.

‘’We come into the game on the back of a win against Drogheda Utd. It’s important for us to keep improving each week and pick up as many points as possible between now and the end of the season.

‘’The players have been brilliant in training this week and everyone is eager to put in a top performance’’.

Sligo's Colm Horgan returned to action last week after a long spell out with a hamstring injury while David Cawley is also in contention. Shane Blaney is expected to be fit for Shelbourne or Derry City on Tuesday after limping off against Dundalk at the end of August.

Despite all the talk of Rovers and Derry, it is of course Dundalk who sit in second place behind the Hoops. They have played two games more than the Tallaght men however and one game more than Derry - but should they win, as expected, at the UCD Bowl and the Ulstermen drop points at home to Bohs, Dundalk will find themselves level on points with Rovers - albeit with three games more played.

Dundalk's title push received a boardroom boost in the week when they were awarded the points for their fixture away to Sligo Rovers last month, despite losing the game 3-0 at the Showgrounds. The home side were adjudged to have fielded an ineligible player.

The case - and therefore the title race - remains up in the air for now as Sligo have vowed to appeal the decision.

UCD are rooted to the bottom but can still catch Finn Harps, just two points above them, to at least force a play-off with the second-placed finisher in the First Division. Their survival is very much in their own hands.