League of Ireland football has been enjoying an extended moment in the sun over this unusually warm summer, and St Patrick’s Athletic have a great opportunity to maintain that momentum as they welcome CSKA Sofia to Tallaght Stadium.

The third qualifying round of the Europa Conference League brings its challenges and while the atmospheric yet basic Richmond Park is not the venue tonight, the Saints go marching on, albeit at a ground that reaches UEFA standards for such a tie.

The aim of last week’s first leg fixture in Sofia would have been to remain in the tie, however, St Pat’s exceeded all expectations against the perennial European campaigners by first keeping a clean sheet, and then proceeding to win the match.

That late Serge Atakayi strike sees the Inchicore side start the second leg with a one-goal advantage and offers a lot more than just hope in relation to making it through to the final qualifying round.

A fortuitous victory, one might say, for the team who had to defend resolutely throughout the 90 minutes, however, credit must be given for the execution of a well-drilled game-plan, restricting the home side with an excellent performance from the back unit.

And Pat’s also showed their quality, attacking on the occasions afforded, and it certainly puts doubts in the minds of the Bulgarian outfit coming to Dublin looking to win by two clear goals in the absence of the away goals rule.

Tallaght Stadium will be rocking to a different tune tonight as the South Stand will become home to the Saints singing section, and with the main stand already sold out, it looks like it will be a full house at the west Dublin venue.

The Saints are well used to playing at the home of Shamrock Rovers thanks to the amount of times League of Ireland sides meet each other, and while there will be an unfamiliar setting sitting in the home dressing room, the transition to home team should prove quite straightforward.

And perhaps the bigger pitch will accommodate the Saints against this CSKA side who will come to attack, as it should leave big gaps in behind for Tim Clancy’s team to exploit on the counter-attack. 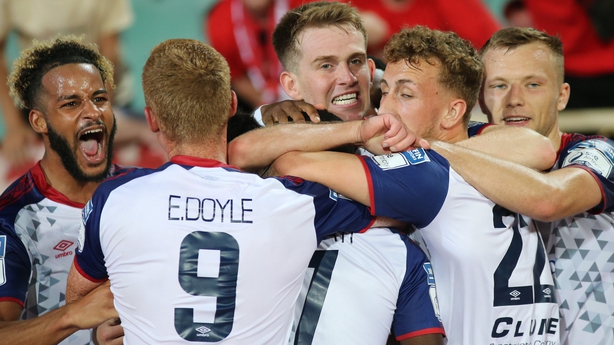 Of course, the Saints cannot sit deep, dig in, and expect to see this game out on the strength of last week’s defensive performance, as one away goal levels matters and will only buoy the visitors to go and win the game.

Clancy will set up his side to win this tie, and while they won’t be carelessly taking the game to their opponents, most notably in the first 20 minutes, expect the Dublin side to play more progressive football and look to show that they are comfortable at this level.

Tom Grivosti admitted that the team have been inconsistent in the league this season, and while it’s only three games in, he said that the team are taking heart from their performances in Europe.

And the defender paid real tribute to the coaching staff at the club by revealing the fact that CSKA threw up no surprises in that first leg as a result of the extensive video analysis compiled ahead of the game.

For this reason, CSKA will have to try a different approach to get the required goals to advance and that change of style could play into the home side’s hands by their deviating away from the norm.

A two-legged tie against Danish side Bronby or Switzerland’s Basel awaits the winners, while the Saints would bring their total prize money above the €1m mark with a straight shoot-out to make it to the group stages of the campaign.

St Pat’s are potentially 90 minutes away from such a scenario, however, technical director Alan Mathews knows that the result is far from a formality at half-time in the tie.

"I think it will be somewhat naïve to try to hang on," said Mathews, speaking to RTE Sport. "We have to play our game, we have to play a positive game.

"We know they will try to stretch us when they have the ball, but we have to do the same and we’ll approach the game in a positive manner. They’ll look to up their intensity and maybe play with a greater level of tempo, they may make changes, we don’t know.

"They are a very good side, but we know that we can up our ante, and play with a bit more positivity and take the game to them at the right times."

Watch St Pat's v CSKA Sofia live on the RTÉ News channel from 7.40pm, or follow our live blog on RTÉ.ie and the RTÉ News app