If St Patrick's Athletic can carry out their game-plan against CSKA Sofia at Tallaght Stadium on Thursday night, they have the potential to move into the final qualifying round of this season’s Europa Conference League.

That is the opinion of defender Tom Grivosti who admitted that the team has been primed for the second leg of the clash with the highly regarded Bulgarian side since the final whistle blew in last week’s first leg in Sofia.

The Saints, of course, recorded a historic victory against CSKA in that fixture, thanks to a late winner, scored by substitute Serge Atakayi.

Still regarded as underdogs to progress, however, the Inchicore outfit have put themselves in an enviable position taking the tie home to Dublin with a one-goal advantage.

Well not exactly home, as the match is being played "up the road", as described by Alan Matthews ahead of the game, in what looks set to be a sold-out Tallaght Stadium for this vital clash.

And while Grivosti lauded the team’s defensive performance in last week’s game, he stressed the importance of getting the right information on their opponents ahead of the game and then having the ability to carry out the game-plan on the night.

"It was unbelievable," said Grivosti, speaking to RTÉ Sport. "The defensive performance, first and foremost, was brilliant, the way we defended the box and we nullified them to very few half-chances and then the bonus to go and get the goal so late.

"The work-rate, the performance of the game-plan, has really helped us. Two clean sheets in Europe is some feat for us.

"Carrying out game-plans is something that we haven’t done consistently in the league and we’ve been consistent in Europe, only three games, but if we carry that on who knows where it can take us."

Looking ahead to the second game, Grivosti hopes that CSKA don’t change things up too much, admitting that the team didn’t learn too much about the opponents in the actual game as they had already been briefed on the Bulgarian side’s strengths and weaknesses.

And the Liverpool-born defender also feels that St Pat’s could hurt them on the counter-attack as some areas have been identified ahead of the game.

"I don’t think we learned much in the game," said Grivosti. "The video analysis we did before the game, we covered a lot on them we knew how they were going to play, and it showed in the game as we nullified them.

"Hopefully they won’t change it up too much, then we know what to expect, and we can do a similar job.

"[We’ll have] a similar game plan. Hopefully we will defend as well as we did last week.

I think we could have done better on the counterattack, and we looked at a few videos as to where we can hurt them in the second leg so hopefully go and get an early goal.

"They could come out all guns blazing or they could be patient with it, but we have to ready for anything, stick to our game-plan and hopefully that sees us through to the next round."

The Dublin side, of course, spent a couple of extra days on the road following Thursday’s game and while a lot has been made about the club’s logistical issues, Grivosti is confident that it has not affected the team ahead of the second leg.

"We can’t wait to get going," said the former Ross County man. "As soon as the game finished last week, we have been fully focused on this one. These are the type of games we want to be involved in.

"There’s a really good mood in the squad after you get a result like that in Europe and we’re buzzing to get this game going.

"We just had a few days rest as we were stuck in the hotel and we just did two recovery days.

"We still had three days training coming into this game so it shouldn’t affect us."

Watch St Pat's v CSKA Sofia live on the RTÉ News channel from 7.40pm, or follow our live blog on RTÉ.ie and the RTÉ News app 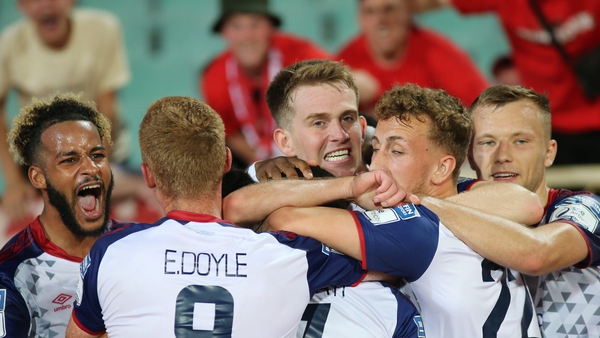