The game is available to watch live on LOITV (www.loitv.ie)

Last week's injury-time goal, which resulted in a 3-0 defeat for Stephen Bradley’s side, has turned an uphill task into one that is nigh on impossible, as Rovers look to pull off a miraculous come-from-behind victory to progress to the next round.

The hosts were perhaps shown a bit too much respect in the first half of last week’s clash, which resulted in a 2-0 deficit at half-time, and while it was a much improved performance by the Dublin side in the second half, that third goal really looks to have put this tie to bed.

Ante Simundza’s side remain top of the table in the Bulgarian top flight, however, they were held to a 2-2 draw by CSKA 1948 on Friday night.

Rovers also dropped points in their quest to win their third league title in a row as they were held 1-1 by Drogheda in what was a lacklustre display by the Hoops at Tallaght Stadium.

An early Saturday afternoon game at a half-full Tallaght sandwiched in between two Champions League fixtures, it was no surprise really to see a below-par Rovers performance.

The manager will not dwell on the result and it will quickly be consigned to the history books as Rovers plan for tonight’s game.

"It was frustrating because leading with a few minutes to go, nine times out of ten we see that out but we didn’t, so we are frustrated," said Bradley. "But we wanted to pick up a result. It wasn’t three points, it was one but we take that and we move on."

There were some positives to take from the game as Neil Farrugia looked lively and dangerous playing in the right wing-back position, while there was a confidence-building first goal of the season for young prospect Aidomo Emakhu.

The manager was also pleased with Sean Kavanagh’s input in what was a very composed performance from the Ringsend native.

"I thought Sean was brilliant all game," said Bradley. "He was very good and when he went left back he gave us a real threat.

"And I’m delighted for Aidomo to get his first goal of the season. I’m absolutely delighted for him because he’s had to be patient. He’s shown glimpses of what he can do. He scored a great goal and possibly should have had another one but I’m delighted he’s off the mark."

A gung-ho approach from Rovers could turn tonight’s game into a real barnstorming affair, however, it would also run the risk of leaving too many gaps to be exploited, which could see the tie killed off early in the fixture.

So expect Rovers to go out with an attacking approach, without really straying too far from their usual style, keeping possession, remaining patient and hoping that opportunities present themselves.

If the Hoops can get their noses in front and remain in the tie midway into the second half, they can then take the necessary risks to put some real pressure on the Ludogorets final third and look to take the game to extra time.

An unlikely outcome, truth be told, considering the quality of opposition, most notably in attack, where chances can be conjured from very little, however, on a positive note, the absence of the away-goal rule ensures that one goal for the visitors is not catastrophic.

"We have to approach it with the mentality that we go to win the game," said Bradley. "Like we knew over there, it’ll be difficult because you’re playing against a very good side but we’ve got to approach it that we have to go and try and win the game."

The influential Jack Byrne remains an injury concern for Rovers ahead of tonight’s game and the side is really struggle to perform to the same level when the Ireland midfielder is missing from the starting XI.

Roberto Lopes hobbled off the pitch on Saturday during the second half of the Drogheda game, and both players will be assessed in training ahead of the game.

The manager confirmed to RTE Sport that both players would miss the Ludogorets game and has hinted at resting players, offering the impression, at least, that the tie is beyond his side and are already prepping for the next stage of the European adventure.

THE EUROPEAN DREAM CONTINUES BEYOND LUDOGORETS

A near full house in Tallaght will set the scene for another memorable European night for the Rovers fans, and most will be happy with a high-octane performance from the team with a goal or two to offer hope on a night that most will expect to leave empty handed.

For the Europa League awaits should Rovers bow out of the main competition tonight, and a new adventure can begin with dreams of making the group stages, to replicate the Michael O’Neill era when the side won back-to-back titles and reached the Europa group stage. 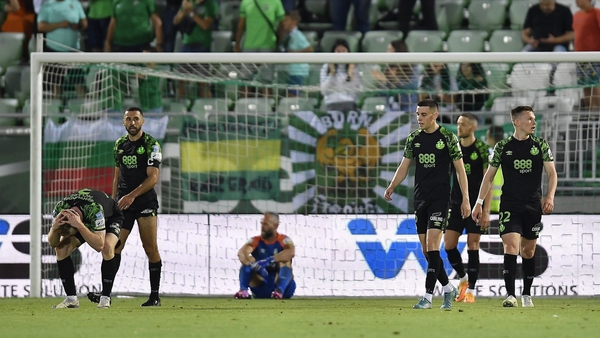