Stephen Bradley lamented his side's "poor" first-half display and their "naivety" in the closing stages in their 3-0 Champions League loss away to Ludogorets, which has left them with a borderline impossible task in next week's second leg in Tallaght.

The back-to-back Premier Division champions, who comfortably overcame Malta's Hibernians in the first qualifying round, were thoroughly outclassed by the Bulgarian kingpins in the first half, Pieros Sotiriou scoring a brace as things looked grim for the visitors.

However, the Hoops rallied impressively in a solid second-half display, spending much of the closing stages on the front foot pushing for a late goal to narrow the deficit before the return fixture in Dublin.

A late sucker punch, arriving after sloppy Rovers passing in their third, saw their chances of progression in the Champions League dim to a significant degree, substitute Igor Thiago firing home at the death to leave the margin at three.

Bradley, while acknowledging his side's improved display in the second period, admitted the third goal had made advancement "an almost impossible challenge".

"I thought first half we were poor and they were very good. The second half we were good with one or two good chances and we were playing some good football," Bradley told reporters afterwards.

"The third goal we have given away is really, really poor from our point of view and really naive. It makes it an almost impossible challenge.

"Second half was a big improvement and we knew we had the second leg to come in Tallaght and it's 2-0. You take that and say we can make a right game of it in Tallaght.

"There were so many positives from the second half to take into next week. So when you gave away a goal last minute by playing out, when we were not set to play, is really, really naive from a really experienced group of players.

"The players know in the dressing room that it should never happen with this group.

"We don't do that at home to a team in the Leinster Senior Cup, never mind away to Ludogorets in the Champions League. It is really, really poor from us."

Ludogorets make it 3-0 with practically the final kick of the match. That could be Game Over, says Alan Cawley. Heartbreak for the Hoops.#RTEsoccer
💻 https://t.co/zjbfbjUDzQ
📺 https://t.co/JYf06csaIG pic.twitter.com/tdYHjCFoWJ

If it was the late show of naivety that irked him in the second half, it was the all-round performance which left him unhappy in the first half, Bradley indicating that his team were leaden-footed and showed their opponents too much respect.

"We knew first half wasn't us. Our decisions were slow, our passing was slow, we were inviting them to press. We didn’t penetrate enough, our angles were poor. We were just off the game in every aspect. We showed them a bit too much respect.

"In the second half we were better in all of those departments. The performance showed that and we were unlucky not to score.

"Sean Hoare from the corner, we score that it’s 2-1 to take back to Tallaght and it’s a totally different tie. But at this level it’s small margins and we shot ourselves in the foot at the end." 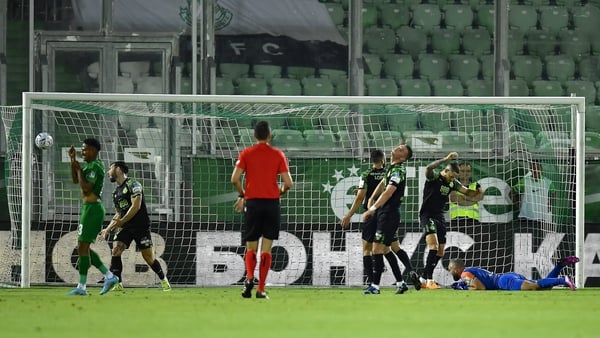