While accepting that the trip to Bulgaria to take on Ludogorets in their Champions League second round qualifier is a step up, Shamrock Rovers captain Ronan Finn has highlighted a mindset within the squad that is determined to ensure that the tie is still alive for the return leg in Tallaght.

The SSE Airtricity Premier Division champions take on the 11-times Bulgarian champions in the Stadium Ludogorets Arena, in Razgrad, on Tuesday, kick-off 6.45pm.

Finn has a wealth of experience in European competition. He played for Sporting Fingal against Portuguese side Maritimo in the Europa League in 2010. Subsequent appearances in the group stages of the same competition followed during his first stint with Shamrock Rovers in 2011, and then with Dundalk in 2016.

Having played at that level, the experienced midfielder believes Stephen Bradley's side have the wherewithal to be at least competitive in Europe, starting with their visit to Bulgaria.

"That part of it annoys me a bit – the moral victories", said Finn, when speaking to the press in advance of the qualifier.

"I've experienced enough of it where you do well, put on a good performance but fall. It’s something we’re trying to change. The manager is building a group to be more than that, to succeed in the challenge. I feel we’re coming to a stage where we’ve the squad to compete at the highest level, to play in the top games. Tomorrow will be a challenge.

"Over the years, I’ve played in the games that we’ve got turned over. We need to get away from that as a league. We’re doing that in this club. We’ve set our stall out by setting targets within the group and tomorrow is part of it."

"We have a game plan, we back ourselves as players, we have a template we play off. The level of detail we are given from the staff gives us that opportunity. Then it’s up to us: we are the ones who cross the white line, we are the ones on the pitch who have to deliver.

"But we have been given every opportunity with the homework we’ve been given. We are under no illusions, they are a good side. It’s a game over two legs and we want to make sure we are going back to Tallaght with it all to play for."

Hoops boss Stephen Bradley reports that he has a full squad available to him, though he was tight-lipped on talk linking Andy Lyons with a move to Blackpool, stressing that his focus is on the two European games upcoming.

The Tallaght haven’t had the most straightforward build-up to the first leg, with travel headaches abounding for the Hoops.

A lack of available direct flights and no charters meant Bradley’s side have had a tricky time in getting to Razgrad.

Some players were booked on a commercial flight to Sofia before making the 335km journey to Razgrad, while others first flew to Gatwick and Luton before subsequent flights took them to Burgas, where they needed to still travel an hour and a half by road before making it to the team hotel.

Not ideal preparation then, with Bradley conferring that it does give Ludogorets something of an advantage. 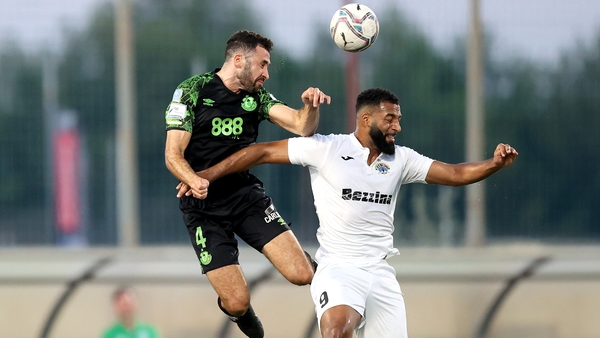